All The World’s Monsters Volume III, Part I

Either 5-6 Posts Mysteriously Vanished, Or, Nope, Somehow, I Never Did It

Wow. Even For Me, That’s Weird. I Guess I Meant To And I Got Sidetracked.

Which Is Pretty Much The Opposite Of Weird, For Me 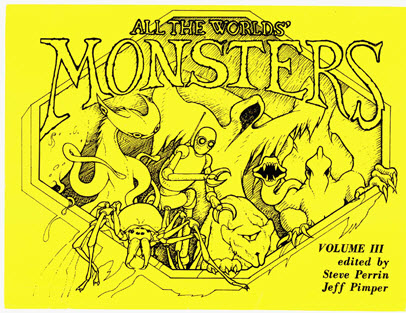 Anyway, after a long and inexplicable delay, here is the coverage of the third volume of that classic work of madness and mystery that is… was… All The World’s Monsters! You can start with Volume I and go to Volume II and figure out how to get all the sub-parts yourself (hint, they’re all tagged “All The World’s Monsters”)

I haven’t cracked an AWTM volume since the last part was finished, over a year ago, so I really have no idea what awaits us.

Well, in terms of specifics, that is. In terms of generics, what awaits us is the beautiful, wonderful, insanity of the Burgess Shale Era of gaming. I expect literary references, mythology, stuff that came from random tables, stuff that came from doing some really good drugs, and at least one or two hitting the trope of “women are really strange and scary”.

The introduction apologizes for the delay in publishing Volume III and assures that this new “Runequest” game from Chaosium will not mean the end of AWTM and there will be a Volume IV. Well, there never was. And it’s possible “Runequest” wasn’t a fatal distraction… but in 1981, Chaosium published a little game called “Call of Cthulhu”, which was, ahem, a bit of a runaway success.

Arkle: A 15 foot long, acid-spitting, telepathic (with its own kind) komodo dragon.

Baggol: Sadly, and somewhat surprisingly, this does not come in onion, sesame, or raisin varieties, nor is it +4 against the gluten intolerant. It is, rather, a totally mundane and normal horned, flying, dog that can breathe fire, acid, fear, and sleep. It’s not clear if it can breathe all four concurrently, or one at a time, or only one type and the GM chooses which for each particular species.

Bahamut: This is not the famous platinum dragon, but rather, an intelligent, evil catfish that can “breathe underwater fire”. Anyone got some Cajun spices?

Blink Blob: A blob which:

One – and only one – of the above traits is a lie. Guess which one without looking.

Butcherbird: Your basic man-sized killer bird, with vorpal tail feathers (they’re monofilamentary, my dear Watson), and which is immune to cold and flesh to stone spells. Random-seeming immunities were par for the course back then. You can sort of imagine why a creature might evolve immunity to cold, but to petrification? Well, maybe they laired in areas rife with gorgons and basilisks and cockatrices. Oh my.

Chandelier Beast: Again, I am disappointed to report this creature does not lair in old ballrooms, waiting to plunge on unsuspecting victims. (Granted, I could see such a thing as a Ravenloft version of the piercer or lurker above.) It is an 18-tentacled octopus that lurks in the ceilings of treasure rooms and attacks those who disturb the goodies.

Clam, Giant Air Breathing: It’s a clam that is both unnaturally large for its kind and capable of surviving outside of a watery environment. It travels in packs and hunts by having one pack member make a loud clacking noise, which wakes a sleeping victim, who then runs into the open jaws… er… shells… of the other pack members. Like many creatures, it may have treasure in its stomach. This fact of RPG biology is why anyone following adventurers comes upon scenes of gory postmortem carnage more suited to Lovecraft than to Tolkien. In our old D&D group, “adventure” was a verb, meaning, “to strip a room and any bodies within it down to their component atoms in search of loot”, i.e., “We take ten minutes to thoroughly adventure the room.”

Cuddle: An animate cactus, so named because it cuddles its victims.

Davis Baby: Our first media mention (officially), this is the baby from the film “It’s Alive!”. It has vorpal claws.

Death Seed: A spore which drifts along the Astral Plane, looking for people who are asleep… on the Astral Plane. As “optimal parasitic hosts” go, that’s kind of… specialized. It’s like being one of those worms that eats fish tongues and then replaces the tongue in the fish, except, it only preys on merfolk wizards with the illusionist specialization. (And, yeah, that fish-tongue-eating thing is totally real. Google it. When you’re not eating. Nature is gross. )

Demon Of Love And Madness: what is this i cant even

I Repeat: What Is This I Cant Even

Demon Succubus, Simplistic: I’m not sure what’s “simplistic” about this, as there are six types of demon succubus, each with their own special attack, and, by the way, this fulfills my “women are strange and scary” trope prediction. As least there’s a bit of gender equality here as the text notes that all succubi are also incubi. The bathrooms on the lower planes are gender-neutral. Good for them!

Demon, Basic: There are 12 kinds of Basic Demon: Applesoft, Integer, Microsoft, Microsoft Visual, Quick, True… (You don’t want to know about the C++ Demon. Or the Unix Daemons.)

Demon, Rainbow: This is a giant spider demon with each leg being a different color and… oh, just read it. 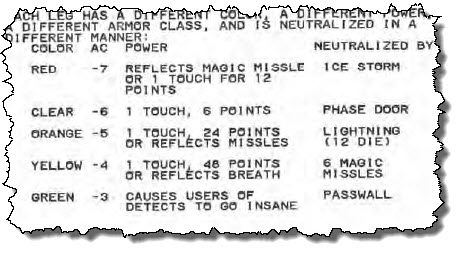 I’m Not Bothering To Scan The Next Page. You Get The Idea.

Dragon, Amber/Topaz: By 1980, all the identifiable single colors were mostly used up for dragons, so we get this. In addition, there’s Hazel/Jade and Chestnut/Pearl. And Tan/Turquoise. Sadly, except for the coloring, they’re all pretty generic dragons, except the Chestnut/Pearl that breathes webs, which is a little unusual.

I think we can stop here. Next time, the Eel Bird!