All The World’s Monsters, Volume II, Part I

This One Has Bionic Unicorns

Seriously, What More Do You Need? Bionic Unicorns, Dude!

The backstory on All The World’s Monsters, the series (not to be confused with the movie, the web comic, or the stained glass windows) is located here, in the first part of the walkthrough of the first book. Thus, we shall omit going over it again.

Conventions From A Convention

Volume 2 has significantly more explanatory/framing material than Volume I. From a “history of paleolithic gaming” perspective, the most important is a codification of the Peterson Conventions — the “common law” rules used by many West Coast gamers. (I’ve gone at great length on the cultural differences between the Midwestern/Gygax style of early gaming, which has been a primary influence on the “Old School Renaissance” to the degree that everything else about the era has been dropped down the memory hole, and the West Coast style that is exemplified by the Arduin books, Booty And The Beasts, and this series we’re discussing right now.) The rules show some things that have been widely adopted, such as the shorter melee round (10 seconds in this case) and heavy armor reducing Dexterity (now a reduction in the maximum bonus), and some things that have not been, such as complex rules for determining action times (how long it might take to coat yourself with magic oil). These rules debuted at DunDraCon in 1976; both DunDraCon and Steve Perrin are still around and are major parts of gaming culture, (The highly percentile-based system he built on top of D&D’s D20-ish mechanics were, obviously, the genesis of Runequest, and through it, of Call of Cthulhu, which, in turn, inspired much of Lovecraft’s modern invasion of pop culture. From little oaks do mighty cultural monoliths grow. But I digress. Big shock.)

“How Long Does It Take To Apply Oil Of Slipperiness?” Is A Big Issue If You’re Using the BOEF D20 Supplement. Google it.

Perrin’s SCA Roots Show When Discussing Things Like Reach And Initiative. (Don’t Look For A Joke Or Pun. That’s Just A Comment.)

So, as I have said before, and as I shall say again:

I got your “Rulings, Not Rules”, right here, pal!

Agarret: A ten foot tall mutant “distantly related to the goblins”, it impregnates you with its tongue. I could make another BOEF joke here but, really, why bother? Kind of obvious, even for me.

Oh, and its wings have lashes which work as whips. 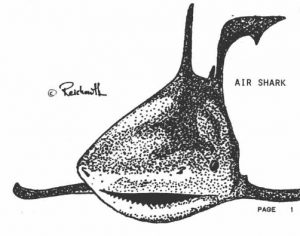 A Rare Image Of An Unexploded Air Shark

Air Shark: From the Arduin series. It’s a flying shark filled with hydrogen. Why don’t flying creatures ever evolve to be filled with helium?

Alacorn: A unicorn-pegasus crossbreed, created by “Charlie Luce”, which is an odd name for a six year old girl. I kid, I kid… believe me, I’ve done worse. It “resists magic” as a “sixth level mage”, which is odd, because they don’t really resist magic. (“You know what happens to a sixth level mage that gets hit by a magic missile? Same thing that happens to everything else. Except that since a sixth level mage will have about 15 hit points, the odds of it getting killed if it’s taken any other damage are pretty high.”) Perhaps they meant “saves vs. magic as a sixth level mage”? Or perhaps, in Mr. Luce’s games, spellcasters had special magic resistance? The “we forgot these are our house rules” phenomenon (doot-doodoot-doot) is endemic to the Burgess Shale era supplements I love.

Amanda: Last name, Hugginkiss. It’s a telepathic horse that emits a “mental wave” that has “the same range and direction” as a mind flayer’s psychic attack, but which is not a psychic attack. What is it, then? Hey, what is life without some mystery?

Ape, Man Eating: A giant ape with “a taste for human flesh and human females”, and no matter how you parse that description, it’s disturbing. Speaking of parsing: It rolls 1d6 for Intelligence, and “if its intelligence is three or above, it can use weapons other than a club at +2 damage”. So, it can use a club for normal damage (listed as 1d10 in the creature’s stat block), or something not a club, but with a +2 damage bonus? Then why not +2 with a club?

Aquazombie: It wears rotting orange chainmail and is laughed at by the other zombies because it speaks to dead fish.  Sorry. It’s not actually a zombie at all, but a victim of the alien slime god. Also known as “The Walking Wet”. No, that’s not my joke. That’s in the actual text. I am not making this up.

Barluk: A typical example of “something that is basically a self-propelled save-or-die”. It’s a green lizard that can walk on ceilings, with a petrifying gaze, and, if it touches you, you must save vs. magic or die of a putrefying (not petrifying) disease within five minutes. You can hear the DM saying “Go ahead, use your little reflecting shields!” in a mocking tone even now.

It Took Me Longer That You’d Think To Google This.

Bionic Unicorn: Rainbow Sparkle. Astrocorn. A unicorn barely alive. We can rebuild him. We have the technology. We have the capability to make the world’s first bionic unicorn. Rainbow Sparkle will be that unicorn. Better than he was before. Better. Stronger. Sparklier. With a lightning horn. (Yes, really. It can shoot lightning (6d6 damage) from its horn 24 times a day. Not once an hour, mind you, but 24 times a day.)

“Based on a Roger Dean illustration”, along with the Bionic Paladin and the Bionic Bat.

Black Death: Another of the brilliantly mad creations of the late Clint Bigglestone, this creature is not, in fact, a giant yersinia pestis bacterium (which would hardly be out of place in the West Coast gaming culture of the 1970s, mind you), but is an elephant-sized cross between a spider, bear, and squid, which has true seeing, hunts with “find the path”, and is immune to cold and confusion. Not to be confused with Manbearpig. I’m totally serial.

Blue Moon: A hovering blue sphere, about six feet in diameter, which can paralyze like a gelatinous cube. (So, a gelatinous sphere?) It is found hovering over graves, for some reason, and can be used by vampires as “an early warning system”.

I did the introduction and two letters. That’s enough for one day. You might notice I’m commenting on more creatures, so far, than I did in the prior article (which had two from the ‘A’ and four from the ‘B’, and no, you can’t have two extra egg rolls instead of the hot and sour soup, it says so right there on the menu). That’s not part of any conscious plan (conscious planning never enters into these articles, trust me). Perhaps there are more interesting monsters in this book (so far), or my personal “this is worth commenting on” bar is momentarily lower, I don’t know. I just read the book and call out anything I think is amusing, intriguing, unique, or informative. Give me the same book on a different week, and I might pick different creatures. Or not.

Anyway, hoping to get the next part by next week.