The Big Blue Edition I Got At GenCon In 2000

Talislanta is another of those games that’s been rolling around forever, in various editions, promising a less Tolkien, more Vance/Smith/Lieber setting, with generally simple rules. Character creation seems to be “pick a template and go”, so, that makes it an excellent choice for a time-constrained night, which this is. (“Why is this night different from all other nights?” “It’s not.”)

I have bits and pieces of a lot of other editions, as well, but this one is a massive tome, complete in one volume, so it also has that in its favor.

I must choose from one of…. over a hundred???…archetypes. Well, no one can say my options are limited. Let’s see…

First, the archetypes are grouped by region (of the setting). That’s helpful, a GM can say, “We’re playing in the Northern Reaches”, and players know to pick from that section, except, of course, there’s always the Special Snowflake who, if you say, “I’m running a low-magic semi-historical game set in 1500s Venice”, will show up with the cyber ninja catgirl who is also Voldemort’s sister. Fortunately, another benefit of huge 400 page hardcovers is you can whap those types real hard upside the head. I am not a “Yes, but…” GM. I am a “Not just no, but hell, no!, and never darken my door again!” Anyway, character archetypes.

Kasmiran Moneylender? No, that’s for NPCs. (For the record, I am making my decision by the careful and considered method of looking at the pictures and see what strikes my fancy. That the first thing that struck my fancy was a twisted figure surrounded by piles of coins tells you a lot about me, none of it good, all of it true.) 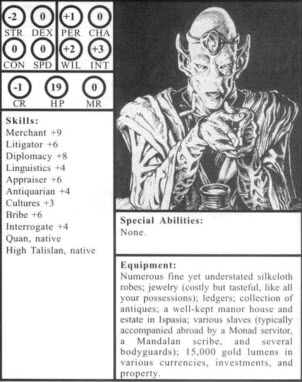 Looks like the next best thing is “Ipasian Mercantilist”.

Honestly, at this point, I could say I’m done. Really, if you want, it’s “pick an archetype and go”. But even for me, that seems lazy. The site’s motto is “Free, And Worth It!”, not “Free, And Expensive, Because You Wasted Precious Time Reading Something That Wasn’t Even Half-Assed!” To quote “Superstore”:

“I do the bare minimum, but I don’t do less than that. And I’m not about to let a bunch of deal-hungry rubes trash our store and make me feel bad for Dina, which I did not think was possible. So I’mma get out there, and I’mma finish my shift. And yeah, I’mma cut corners, and I’mma a phone it in, but it’ll never be said that Garrett McNeill did not do just enough to not get fired.”

Since the vast majority of my character is what’s in the archetype, and I am extraordinarily lazy, I’m just posting it to the left.

So, I have the option to customize my archetype. I can, for example, add 2 points to attributes, at the cost of 2 points from other attributes.

Ispasian Mercantilists are supposed to be sort of Vulcan-Ferengi crossbreeds — calculating, greedy, but dispassionate and calm. I’m going to play with that, and make one who is more of a used car salesman — loud and outgoing. So let’s kick Cha up to +2, and take 1 each from Dex and Will.

OK, this is another point where Jeopardy Theme was playing… for a long time. I am supposed to pick a skill based on my background (Urban) and two Common skills. I’m guessing “Urban” is its own skill? Sort of? For doing… Urbany stuff? It also doesn’t say what your starting skill rank is… I guess 1? So, my two common skills will be Fashion and Haggle.
Fashion: +3
Haggle: +3 (Really surprised this wasn’t an archetype skill.)

Buried in a locked paragraph in a disused subsection with a sign on the door reading “Beware of the Grue”, I found a few sentences on Ispasian naming, so I am going with Ispvarn.

And, we’re done. You know what’s odd? It seems to take me about the same time to do a simple system as a complex one. Weird. But, Ispvarn the Unusually Loquacious Mercantilist is ready for play!