Which Is About Some People Who Voyage Among Stellar Objects

Or Hike Through Suns

Or Meander Across Luminaries 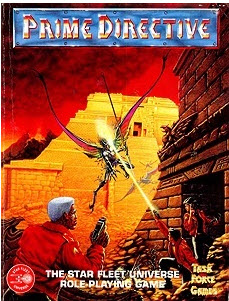 Yes, it’s all perfectly legal. Back in the 1970s, copyrights and trademarks were weird, and somehow, Franz Joseph Designs ended up with the right to license a pretty good subset of the IP of a cult sci-fi show that barely lasted three low-rated seasons (and one animated season) to a small gaming company, which put together a “pocket game” that allowed you to play out battles between Federation Constitution-Class ships, Klingon D-7s, and I think Romulan Warbirds (I have never seen the very first edition, so I’m not sure what it contained). Since then…. well… it’s grown a little bit. The latest edition of the core rules of Star Fleet Battles is 460 pages — and that’s just the rules. You need SSDs (Ship System Displays), some counters, and a hex map. If you’re rich, there’s a miniature line.

But we’re not here to talk about Star Fleet Battles. We’re here to talk about an RPG published in 1993 (and the setting converted to GURPS and D20 much later), where you play members of a “Prime Team” dispatched by the “Federation” to.. erm.. explore unusual undiscovered planets, search for unknown organic creatures and unknown social structures, to bravely voyage where no sapient being has voyaged before! (Why pick this? Well, my XMas present to myself — a pile of SFB books I’ve wanted for a while and finally just ordered instead of hoping I’d find them discounted at GenCon — arrived. So I’m in the mood. (R12, Y2, Y3, the Andromedan Threat File, and XR-1, if anyone cares, which no one does.))

(How old is this book? Well, in the list of “other Starfleet Games”, it includes one that is play by mail.No, there’s no missing “e”. Snail mail. The postal service. “My Lord, a raven has arrived from King’s Landing, and it states ‘Four overloaded photons at range 1 on your down #4 shield, ha ha’. Ack! Nay, slay not the messenger!”)

Let’s go with it, shall we? (I would have been done by now if I’d used the D20 version, but hey, part of the point of this exercise is to mostly use games I own but never play. Unless I’m being really lazy.)

Since Tellarites are in one of the supplements, I can’t re-make my engineer… how about… a Vulcan medical officer?

“Will this hurt, Doc?”
“Based on my understanding of human neural reactions, the pain is likely to be excruciating.”
“Well, will I be able to play the piano anymore?”
“Your crew records indicate no current musical accomplishments or even casual training, so your question is illogical.”
“You got a great bedside manner, doc.”
“Sarcasm is also illogical.”

I am aiming for Medical division, so when it’s all done, I need a 5 or better in First Aid and Medicine.

Combining standard Star Fleet skills and those from my division, I get:

I get 56 points for skills and attributes, using a scaling system where I pay more to go up each step. A little math, and my attributes become:

This is definitely one of the crunchier systems I’ve used in this exercise! And I really don’t understand the “skill tricode” resolution mechanic, but then again, I haven’t studied it too much. While it would be fun to play Dr. Vtok, if I were playing him or running a Prime Directive game, I’d probably use the GURPS or D20 rules — both are crunchy, but also, familiar and with immense libraries of supplemental material, so if the Prime Team ended up on a cowboy movie planet due to Godlike Aliens trying to decide if humanity is worthy or not, I could use D20 Sidewinder or GURPS Old West.