And The Foil Monster

Right! Let’s skip the all usual shilly-shallying, malingering, dilly-dallying, and loitering. If you want backstory, here’s part I of the Volume II walkthrough, and here’s Part I of the whole series. Now, on to the monsters! 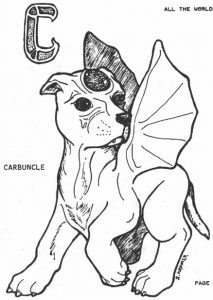 “Carbuncle” Can Be A Pustule Or A Puppy. Go Figure.

Carbuncle: First, for the love all that’s holy or unholy, do not type ‘Carbuncle’ into Google Image Search unmodified. Trust me. In the classic AD&D Fiend Folio, a carbuncle was an armadillo with a gem in its forehead. This much earlier incarnation, presumably drawn from similar myth, is a winged puppy with a gem in its forehead. Since the gem is worth a fortune (per ATWM) and acts as a “double luckstone”, PCs will be gleefully massacring the adorable creature to the left. That might be why it was changed to a less-cuddly armadillo, because, let’s face it: If it’s walking around with loot in its forehead, it’s meant to be killed, so trying to make the players feel guilty for helping a creature fulfill its role in the ecosystem is hardly fair.

Cockroach That Ate Cincinnati: Based on the song. What do you mean, “What song?” Get off my lawn, you damn punk kids!

Conehead: They are from France, and immune to any powers that effect emotion or thought. Come to think of it, I think a version of Coneheads also appeared in Arduin. Yeah, this entry is by Dave Hargrave, so they did.

Cyberscorp: Sounds like a 90s Marvel character, but it’s a cybernetic scorpion with a force-lash for a tail. When it fights sheem battle spiders, the tail “switches to positrons”. Thought you’d like to know that. Could come in handy someday.

Darkness Monster: It’s a reptile with hairy arms and… oh, just read it!

Reptiles Can’t Be Seen On Infrared. Who Knew?

Deadeye: A giant hog with a death gaze. Man, if you want bacon in old school games, you have to bloody well earn it!

Demon Of Sleep And Nightmare: This demon can put you to sleep with a single touch and then kill you in your dreams. It’s a mechanically complex critter, with a full paragraph of rules for its “death dream” power that can kill someone over the course of several rounds, and it also has a different armor class based on what type of attack is being used, effectively replacing the standard AC system entirely.

Demon Of Sleep Etc: I suppose someone didn’t want to type “Demon Of Sleep And Nightmare Type II”. This creature is like the Demon Of Sleep And Nightmare Type I (which was not listed as Type I, but never mind), except it can also put you to sleep with its gaze, and it carries a flail that inflicts a “Perrin Critical”, which means rolling twice on the “Perrin Critical Hit Table”, which is, hmm, probably in the “Perrin Conventions” at the beginning, no, maybe at the end? No. Hmm.

(See also my coverage of the Princecon III rules for my comments on the long-lost “personalization” of mechanics and systems in the Burgess Shale era of gaming.)

Demon, Rainbow (Lesser): Resembles an octopus, but it can attack with only six tentacles, and each tentacle is “like a prismatic wall”,  but they “harden and strike like a storm giant”. Hm? I don’t see a Demon, Rainbow (Greater) here.

Dillemma (sic): It’s a goat headed ape. If it attacks, you may be stuck on its horns. Get it? Get It?

Dragon, Cinnamon/Sapphire: One of the rare and majestic “stripper name” dragons, this beastie breathes “polymorph”, and often inhales its own breath to change shape. Uhm, seriously. That’s what it says.

Dragon, Mahogany/Diamond: I already made the joke.

Dragon, Russet/Emerald: This one breathes “flesh to stone”. And doesn’t really sound like a stripper.

Dragon, Umber/Ruby: Because I felt they all needed to be listed.

I find the idea of “wood dragons” appealing as a collective type (maybe I’ll write them up…) , and I am huge fan of the original gem/crystal dragons (the psionic, neutral dragons) from AD&D. Unfortunately, this is a case where “less is not more”. Introducing a new set of dragons (they are referred to as the “Luce Neutral Dragons”) without any kind of context or framing, even two or three sentences, really leaves them as just some naked stat blocks, and dragons deserve better. 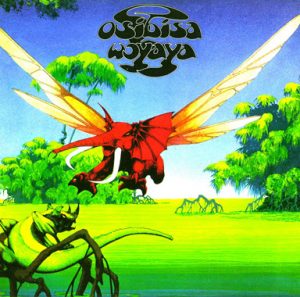 Today, We Steal From Video Games. Back Then, Album Covers. All Culture Is Appropriation.

Elephant Fly: Well, you’ve seen a horse fly, and a dragon fly, but you’ve never seen an elephant fly! (Was that from Dumbo? It must have been. It was in my brain, but I know I didn’t make it up.) But this creature isn’t from Disney. It’s from Roger Dean. See left.

Elephant, Flying: Also from a Roger Dean illustration, but, I guess, not the one I just found. So it goes.

Fighter In Mirror Armor: It’s a fighter. Wearing mirrored armor that reflects spells, based on alignment. For example, chaotic magic used against lawful armor “is reflected back 50%”. I do not know if that means “reflected back half the time” or “reflects for half-effect on the caster”.

Flailtail: It’s got a big butt and I cannot lie. I am not making this up! It “backs into combat” and “its armor class is due to its massive buttocks”.

Foil Monster: Normally made of tin, but can be gold or silver. There’s no description of what it looks like, just what it’s made of and what its corpse is worth, which is so Old School I could just plotz. Since it’s listed as one of the “clean up crew”, a category containing all those creatures that wandered dungeon corridors for no good reason, including assorted slimes, oozes, and cubes, I’m going to say it looks like a giant foil ball that rolls at you. And then bites you.

Foulmouth: Rather disappointingly, this is not some kind of goblinoid that curses at you with such vigor that you take damage. Rather, it is an upright leprous aardvark with severe bad breath. Should go to San Francisco. There’s a New Age guru there who specializes in dealing with such problems. Surely, you’ve heard of the super California mystic, expert: Halitosis?

But, seriously, it’s a bipedal leprous aardvark with “miasma” breath. Clint Bigglestone’s uniquely brilliant insanity, again. I wish I could have met him.

Fuzzy: It’s a fur covered beholder with only the central eye, and about 2 feet in diameter, or, if you will, a hairy floating beachball with an eye. And tentacles, which can sting you, constrict you, or wield a weapon. The normal beholder central eye attack of “anti-magic ray” isn’t listed, but “psionic blast” is; it’s not clear if you’re supposed to just know that the central eye creates an anti-magic ray, or if the psi-blast replaces it (I am strongly inclined to the latter).  And why am I spending so much time thinking about the specific mechanics of a fur-covered mini-beholder?

PS: It is described as a “less imposing” version of the beholder. Yeah. You could say that.

About 1200 words, covering four letters of the alphabet. Seems like a good length. Tune in… eventually… maybe even next week… for part III!