Well, that got off track quickly.

Front Cover For All The World’s Monsters

ATWM (pronounced “At-whem”, which by no small coincidence is also the name of the Dread Underservant of the Elder Lords of Far Gallarik, Realm Of Dreams Twisted And Hopes Devoured) is a collection of monsters originally published in 1979 by Chaosium, based primarily on user submissions and “for use in fantasy role playing campaigns”, as long as they rhymed with “bludgeons and flagons”. I am writing this walkthrough based on the third printing, which is also of the second edition. (I believe it’s the third printing of the book in total, not the third printing of the second edition. Normally, this would be irrelevant fluff, or, in other words, exactly what this website is known for, but when discussing the earliest generations of supplements, things tended to change between printings — see the art changes in Arduin, for example.) I could buy a PDF scan of the original edition on Chaosium’s site and then compare it, but that would involve both money and effort, two things I am loathe to expend under any circumstance.

ATWM (Praise At-whem! Hail At-whem!) is laid out rather oddly. (Granted, it was unusual for gamers at the time to be laid out at all, if you get my drift.) Published in 8 1/2 x 11 format, it’s intended to be read sideways, presumably to accommodate the fact the book was basically printed out on a computer, and, at the time, printers didn’t do “portrait” mode.

Computer? Yes, children. They had computers, and printers, in 1979. They were, admittedly, in the form of giant mechanical monstrosities that filled multiple floors in large, secure, buildings, no more than one to a city, where they were tended to by the Priests Of Babbage, children taken from their parents and raised from birth to feed punch cards to the giant metallic Baals and then read the sacred offerings that spewed forth in cryptic code from1… oh, OK, not that bad. But close. The books represent one of the earliest applications of computers to gaming in the sense of using them as tools to manage and manipulate game information.

Not To Be Confused With The Dessert Ape, Which Is Made Of Chocolate

You may notice a familiar name among the credits. Many of Dave’s contributions here are not found in the Arduin volumes, making this a defacto supplement for Arduin. By the way, you have to love the sparseness of Old School text. A few stats and the barest hint of description. “The third eye is hypnotic”. Which means… what? Acts as a charm person? A suggestion? Simply makes the victim stand in place, fascinated, until… they’re damaged? They save? Is there a range? How many people can it affect? But, hey, the lack of any mechanics isn’t a problem, I am told, because “reasonable people” can “just agree” on what it means! Yeah, “reasonable people” always “just agree” on what things mean. It’s clear that the professional diplomats and negotiators who tussle over issues around the world don’t have the social skills, rationality, and willingness to make fair compromises that socially maladjusted 14 year olds do. But I digress. Anyway, three-eyed hypnotic apes are totally awesome.

Aaaannd another note: A lot of the critters here have a hit die range, making them effective threats at many levels. Oddly, this wasn’t widely adapted by “real” D&D until, yes, third edition. (“D&D 3e — We Finally Notice What’s Been Happening In Game Design Over The Past Twenty Years”).

The editors/archivists are Steve Perrin, a man well known to gamers and still quite active today, and Jeff Pimper, who… isn’t. At least, I don’t know who he is, and, like most people, I believe anything I don’t know can’t possibly be important. Perhaps in some distant future time we’ll have a Star Trek like computer system where I can just enter someone’s name and find out things about them, but that’s not going to happen soon.

For no good reason, here’s the back cover: 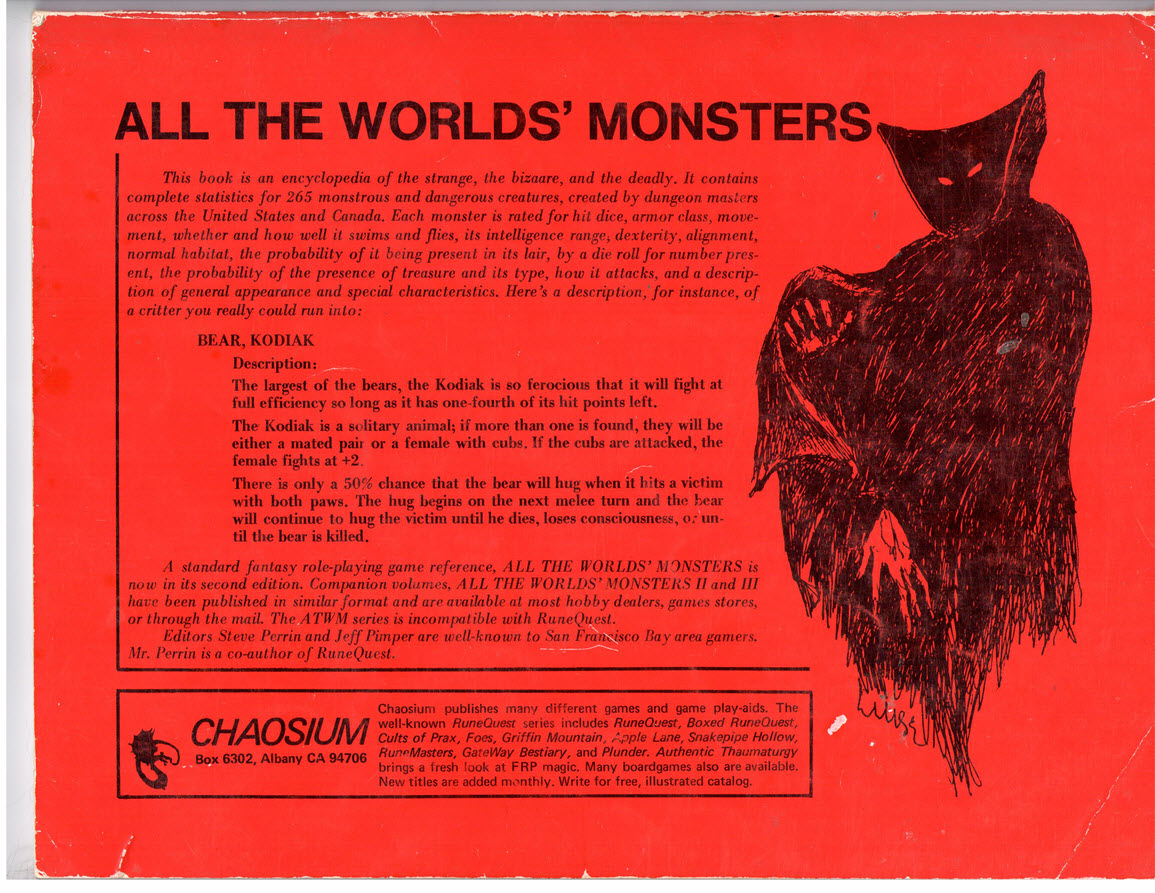 So, my plan here is not to do the kind of insane, line-by-line, “close reading” I did of Arduin, because, well, there’s only one Arduin. I’m going to do what I did w/Booty And The Beasts and Necromican… kind of skim it and highlight a few favorite bits. That might take several articles, or not; it depends on how much strikes me as worth noting, depending on my mood at the exact moment I hit a given page. Mrlizard.com: Where you pay nothing and get your money’s worth!

(If I ever get off my lazy ass and set up a Patreon, I’ll need to change my slogan.)

Ant Man: An unexpected commercial and artistic success that blended humor with “heist movie” tropes, this… no, wait. This is an 8 foot tall, four armed (two have stingers, two have hands) insectoid which is immune to mental spells and “is the dominant life form on it’s (sic) home planet”.

Ape Snake: Sadly, this is not an ape-lamia or the like; it’s an ape with octopus tentacles, included in Arduin as an octorilla. I find the use of “Ape Snake” to be false advertising.  I am going to stat out a proper ape snake, just see if I don’t! Harrumph!

Bagda And Fallowman: While this sounds like a one-season detective show on USA Network, what it actually is are two “Einheriar of the Herlathing”, whose fathers are Toll and Melimbor, respectively. I like knowing who people’s fathers are, don’t you? They seem to be drawn from this book… a lot of things in ATWM (and in early gaming in general) were lifted directly and without acknowledgment from all kind and manner of pulp, books, movies, and comics. We’ll be seeing a lot of that in this article.

Behinder: It sneaks up behind you and… no, not that, you pervert! It paralyzes you and drags you off. It always target the “last in line” by using the mental command “fall behind”.

Bloodbouncer: A combination of stirge, tribble, and superball. Seriously. That’s what it says. When was the last time you encountered a stirge, anyway? They used to be really commonplace, but no one uses them anymore. Go figure.

Carniverous (sic) Typo: Damn, I hope the spelling of the name is intentional. That would be meta. 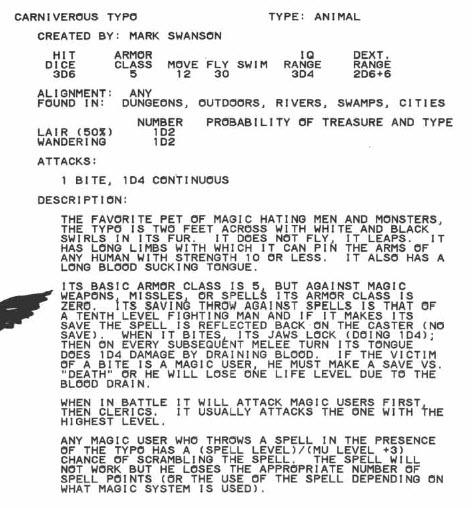 A Classic “Screw The MU” Critter

I have to hope the formula for spell failure is, itself, a typo. As written, it doesn’t make a lot of sense, but change it to “*” instead of “/” and it does.

Cloud, Silver: A weird mix of power levels in one creature. It has 6 HD but attacks as a 30th level Lord (fighter). It does 1d4 attacks for 2d8+6 each, and when it’s defeated, it simply goes away and leaves behind 1d4 ounces of Dust Of Disappearance.

Corrabus: What has the head of a cobra, the body of a horse, the lower legs of an eagle, and the wings of a dragon? I don’t know, but it’s attacking. Roll for initiative. It can also mate with humans to produce were-corrabi.

Culverin: An animated stovepipe. It spits rocks at you. There is a 25% chance the rock will hit your head and knock you unconscious. No, you don’t get a saving throw. No, it doesn’t matter how many hit points you have. Dude, trust me… if you’re in the kind of game where you are going to be attacked by an animated stovepipe, you are so much better off being unconscious it’s not funny. I had assumed this was something from actual folklore, because no gamer ever came up with anything as weird as the stuff you find in genuine folk tales and legends, but if it is, google is failing to find anything close to it. (Edit: Maybe it’s something from the Silver John stories? Damn, those are awesome. It bugs me because it seems oddly familiar. Of course, that might be because I’ve had this book since 1984 or so, and I might have forgotten I read about it here originally.)

Well, that gets us through “C”. I will either continue this, or take a break and look at “Starchildren”, the game of alien rock stars in the dystopian future of 2073. No, I’m not “making it up”! I have a copy that I probably bought close to when it first came out, around 2002 or so.

1 Hmm, I’ve got a setting idea now… “Steampunk 1999”, where we see the world 150 years after the Analytical Engine revolution…