Revenge Of The Moltov(sic) Cocktail

Well, here we are again. For Part I of this, please look here. I am not responsible for any loss of sanity that may result. Just remember this: You only have to read what I wrote, and only once. I had to read much more of it, many times over.

I need to name my character, I suppose. With a total lack of originality, I’m going with Angry Al.

So when last we left Angry Al, he (or me) was trying to figure out how to buy skills. After a lot of time pondering the rules… I still don’t know, 100%. I even gently removed the taped-in errata, surveys, and notes from the inside back cover in the hopes it would be there. Nope. (In the survey, though, the author asks “How do you think [Road Rebels] should be improved (Besides art, correct grammar, riffles (sic), and correct tab settings)?” There’s a level of self awareness there, at least.

I think you primarily get your starting skills via spending generation points (of which I have but 50) on “acquired knowledge”, each of which is… uhm… well, they’re kind of different. Some are cheap and simply grant a generically described ability, such as Street Wise (sic), which provides “good knowledge of gangs, people, where they live, where people go”, etc., for 2 points. On the other hand, there’s “Hand Weapons”, which gives +75 to four hand weapon classes, as well as +75 to all three (left, right and two-handed) parry skills, for 50 points.

The skill system is d100 based, so a +75 is pretty damn impressive, though I haven’t studied combat yet. There may be an “opposed roll” mechanic there, as the “parry” skill implies.

That leaves me 8 points. Two go to Street Wise.

I’m kind of tempted to put 3 into Musical Instrument, which will make me, and I quote, “totally awesome at an instrument of the character’s choice”. Sure, why not? Instrument of choice has to be electric guitar, never mind the general lack of outlets.

So, 3 left. Well, might as well go for Hot Wiring, which lets me steal a car in 2d10 rounds, unless it has an alarm. In which case, evidently, I just can’t even try. It strikes me as odd, given the detail of many other areas, that Hot Wiring is simply a “spend the time and you’re done” skill; you’d expect a lot of modifiers for kind of car, quality of tools, and so forth.

As near as I can tell, that’s it for the attributes/skills portion of chargen. Now I guess I buy equipment? There’s no real “step by step guide”. Anyway, I have 1d10 dollars.

The only thing I can buy is a candle. A can of beer is 2 dollars. A cigarette lighter, 5. I’m going to hold on to my money. I mean, not really sure what I could do with a candle.

You may remember I was curious about Condition Levels 4 and 5. They do exist; there’s a notation in one of the paragraphs that, as I speculated, they go into effect as a result of multiple concurrent factors, such as being both heavily encumbered (CL 3) and badly wounded. A perfectly reasonable system. High crunch, but I don’t mind that, and the target audience for the game is self-evidently people who like crunch. The character sheet only shows the modifiers for 1-3, which isn’t too bad, because you can do very little at 4 and nothing at 5 but look around (use perceptive skills).

The Road Goes Ever On…

That’s pretty much it for character generation. If I wanted to fill out the full sheet and plug in all the numbers, I could, but we’re past most of the interesting bits. Someone with a higher social status than I rolled would have a lot more Generation Points to play with, and more money to spend.

All of this takes us up to about page 27 or so. (I say “about” because the chargen rules and other rules are kind of muddled together.) The book is nearly 200 pages long. So what’s in the rest of it?

Combat, mostly. And vehicles. And combat with, on, around, and under vehicles.

And vehicles. Hoo, boy. The author freely admits the vehicle sheets are complicated, because he “can’t design a simple game”. I feel your pain there, buddy. But “complicated” is less of an issue than “cluttered”. These sheets need a lot more space — probably spreading the same data over 2 or 3 pages would be better. The use of proportional fonts means a lot of the tables don’t line up very clearly. Well, see for yourself… 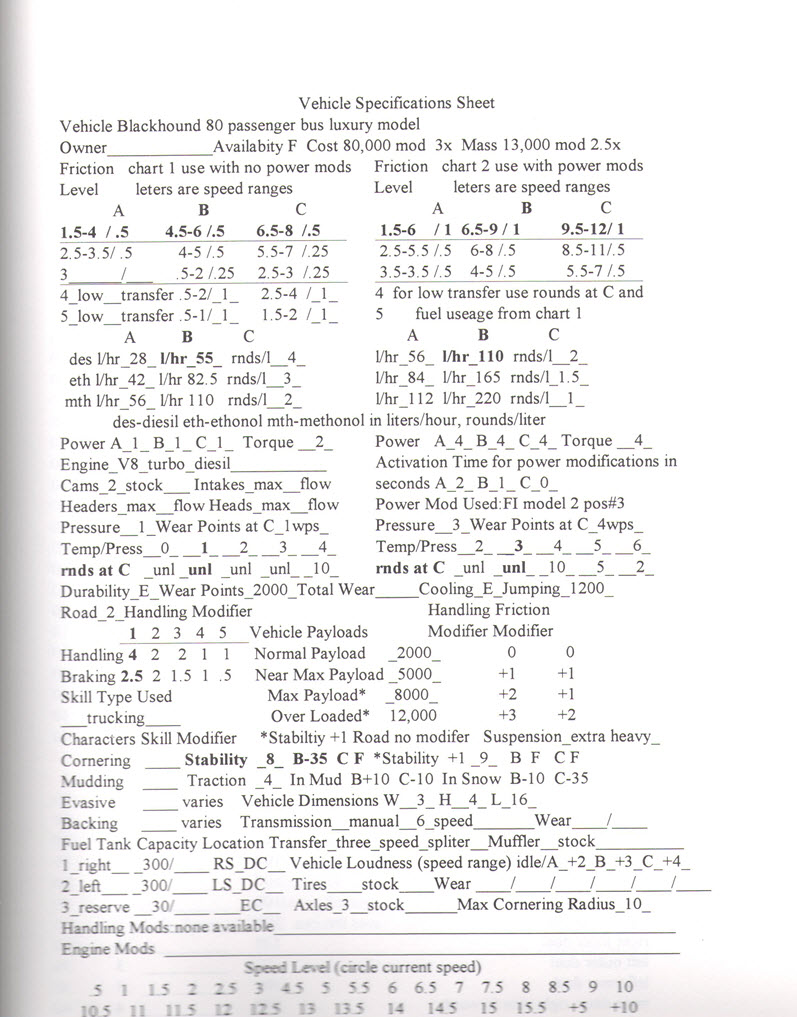 I Regularly Used GURPS 3e VDS, Striker, and Mekton Z. This Is Beyond Any Of Those.

Want more? Armored turrets, oil slicks, smoke screens, nitros (sic) systems, “shitty paint job” (100 dollars), “awesome paint job” (500 dollars), and way, way, more. Rules detail ten levels of road quality and the various factors that allow you to determine them. There are rules for how much damage a vehicle takes when jumping (hitting a bump or ramp, flying through the air, then landing), with the ability to design a vehicle specifically to absorb some of the damage (i.e., a stunt car), and charts that consider both the height of the jump and the type of road surface you land on. There are rules here for all sorts of things I never considered, most of which interact with the design and modification systems. (That’s a compliment, by the way.)

Within the scope of the design space, Road Rebels really tries to include damn near everything. How well do the systems work in play? I have no idea, and no time to start learning them all well enough to test even a basic combat, but there’s little doubt that Mr. Gordon was passionate about his interests and was determined to cover as many setting-appropriate situations as possible.

And all of it is buried under so many basic structural errors that it’s virtually impossible to drag the game framework out of the mire, clean it off, and make it run.

So I’m looking at the creatures section and I notice that the hit location charts include “Four Legged Creatures with 2 heads”. This table is used only for “Zargonites”, which is “a wolf like creature except it has two heads and is much larger”.

Also included is the Kriton, which are large humans with upward pointing noses, and are “hired assassin’s bounty hunters or businessmen”(sic). It seems to me that a hired assassin employing a bounty hunter is taking outsourcing too far. I mean, if I hire an assassin, I expect them to do their own hunting, not get a kriton to do it! Sheesh.

Then there’s the Labotimizers (sic) who kidnap people, pour acid in their ears to destroy their brains, then send them out to repeat the process.

End Of The Road

That about sums it up. Overall, I’d say Road Rebels is a perfect example of a creator’s reach exceeding their grasp. Given a decent editor and a decent (for the era) desktop publishing/layout program, it might have found some niche success. As is, it vanished without nary a trace… at least, I can find few, if any, references to it. When I google “Road Rebels RPG”, the first part of this article is the third hit, and the second… something I wrote back in 2002(!) on RPG,net. And I even used the same line: “Well, uhm, no one can deny that this game has ‘personality’.” Wow. I totally forgot I wrote that… it was 14 years ago… but given identical inputs (the text of the game) I seem to produce nearly identical outputs. Go figure. Perhaps I have failed the Turing Test.

Next time… who knows? Maybe I’ll go to my pile of weird-ass “indie” games and see what strikes my fancy… (Yeah, I keep threatening). Or I might do “All The World’s Monsters” or this game I’ve got around here somewhere about luchadors.