Because This Covers the Archeologist Class and the Third Indiana Jones Movie Was… Oh, Never Mind

Welcome back, after several week’s delay, because I wrote this and then didn’t post it, to Part III of my readthrough/analysis/springboard to digression/etc. of The Delian (not Dragontree) Book Of The Dead, which you can read more about here in Part I and then go on to Part II. Done? Wait, you read some of my other stuff and came back? Well, I guess if you’re a masochist on a budget, this is the place.

Without further ado (or a don’t, to steal from the Muppet Show), the archeologist!

Wow, That Masochism Joke Was More Appropriate Than I Thought…

You might note that we already had a new character class, the Phantom, back in Part I. And then we got some spells, for all classes, in Part II. And now we’re back to a new class. Yeah. Y’see, back in the Olde School Dayse, we didn’t care about “organization” or “layout” and since this was published a few years before desktop publishing really took off, rearranging pages wasn’t easy. Or, maybe, the organization made total sense to them. Look, the Dragon Tree stuff is a perfect example of the “West Coast” style of gaming, and if you’ve ever lived on the west coast (I did, for more than a decade), you’ll know that being a little orthogonal to reality is pretty par for the course. Who am I to judge? 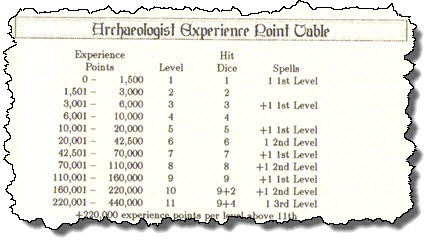 Hit Dice Are As Per Rogue, In Case You Were Wondering

Anyway, the archeologist class in the Delos[1] setting was founded – I am not making this up – by a Frenchman named Belloc[2] who appeared there via some sort of dimensional portal one day. Really. I know that’s the kind of joke I’m inclined to make when trying to punch up these articles, but in this case, the authors beat me to it. Anyway, he escaped the trap-filled tomb he found himself in, and promptly got in trouble with the thieves’ guild, which felt grave robbing was their business. After some finagling, he ended up joining the guild and teaching them the ways of archeology, making Archeologist a “recognized subclass” of thief. (I am unduly fond of the idea of a “recognized subclass”, like there’s a Ministry Of Classes which authorizes and categorizes them.)

One special ability for Archeologists is that after 10 minutes digging in a rubble heap, they have a 5% chance per century of the rubble’s age to think they’ve found an item of great worth, and a 10% chance per century of being right, which leads to a 20% chance a museum/collector will pay 1d3 (gold, I assume) per year of the item’s age.

There is a 5% chance per century of age that the archeologist will become engrossed in the study of the object for a turn (which was 10 minutes back then, remember) and become oblivious unless attacked or otherwise disturbed.

If forced to destroy an ancient relic or artifact (which, let’s face it, is done perennially by D&D type characters – especially if a scholarly mosaic on the wall is standing between them and a secret room filled with loot), there’s a 5% chance they will become permanently insane, and a 30% chance they’ll just go violently berserk.

They also share some thief abilities as a thief of their level, with a few modifications and so on. A nice variant is that they can Turn Undead as a cleric four levels lower, due to studies of assorted ancient religions and lost gods.

As noted, they are trained in “flagellistics”, which is, of course, the use of a whip.

And lastly, they gain a handful of spells from Magic User, Cleric, and Illusionist lists, but only “non-combat” spells, leading inevitably to arguments over what counts. See the discussion of the Phantom in Part I.

But there is a downside. There’s a flat 5% chance per level of gaining a minor insanity due to all that mucking about in forgotten tombs and reading scrolls of ancient lore. Insanity rules are in the Handbook Of Tricks And Traps. (I am 99% sure I own that. I just need to find it.)

Since archeologists spend a lot of time in tombs, it makes a kind of sense to follow up with “The Notable Tombs Of Delos”. It is stated that, like all civilized worlds in the multiverse, Delos is “underlain by numerous great labyrynthine (sic) caverns”, of which few are inhabited by “Arachne Magnissimous and Termite Pseudoarchetectonis”. So, that’s, uhm, good to know?

(This section, by the way, is presented as the transcript of a lecture by Prof. R. J. Raffle of the Guild of Thieves. I, for one, love the over-the-top vocabulary and pseudo-academic style that was endemic in these kinds of supplements. Back in my day, the publishers of gaming books didn’t worry about scaring people off with too many big words. You could learn a lot of vocabulary from Gygax, Hargrave, and their ilk.)

The good Professor follows a format of discussing a concept and then providing an example. So we start with “fresh” tombs, those recently abandoned, and then discuss The Plague City Of … uhm… I think it’s “Thero Wathyllia”? The text is small, blurred, and in a pseudo-medieval font. I’m doing my best, here. The Plague City began as the underground store-rooms and “emergency palace” of some king during a plague, which they tried, but failed, to keep out of their secure hideaway. Thus, it’s filled with traps and the remains of the disease, which, as I am starting to find familiar, causes those exposed to roll on the insanity tables in the Dragon Tree Handbook of Tricks and Traps. I am beginning to suspect at least one of the writers was a psych major who wanted to put their education to good use.

Another source of “fresh ruins” are cities ravaged by invasion, such as “Hu Yan De”, whose inhabitants, facing a barbarian horde, turned their city into a collection of death traps, where every place from the temples to the weaver’s shop was set with the means of beyond-the-grave vengeance.

Further, we discuss “long forgotten ruins” and reasons why someone might construct a place intended to outlive its makers. This is the kind of generic “world building” advice that is always welcome, as having a reason for some adventure location to exist makes creating it easier. This goes on for several pages, which I’m not going to transcribe paragraph by paragraph, and offers rationales (and some tongue in cheek examples) for a wide range of typical dungeon settings and how they might be maintained or still deadly after centuries have passed.

Another few pages is spent discussing funeral rites in the Delos setting, both cultural/regional and guild. This is the sort of thing a lot of GMs don’t really think about, but they can add a lot of color to the world, as well as providing plot hooks.

Next time: Jewels! (We’re about 1/3rd through at this point, but there’s no real ratio of pages to articles.)

[1] I am 99.99% sure that the setting name is not related to the Delos corporation of Westworld. The 1973 movie was a genre favorite by the mid-80s, when this was published, and it’s likely the authors had seen it (it was rerun on TV endlessly), but there’s no real hints of anything that would make it relevant. They probably just liked the sound of the syllables. It’s very, very, easy for multiple people to make up the same word independently and use it in different contexts. But if anyone somehow ended up here because they were looking for Westworld info, well, firstly, welcome, fellow confused fan, and second, here’s the one actually Westworld-related article on the site. Have fun!

[2] Good lord, that’s a lot of backstory for a guy who appeared in one movie.