Of Ghu-Knows How Many Parts

Remember Our Motto: “Free, And Worth It!”

Firstly, while I called this The Dragon Tree Book Of The Dead in Part I, it is actually the Delian Book Of The Dead, from Dragon Tree Press. Since I throw “I hope someone got fired for that blunder” fits about similar trivial errors of detail, it’s only proper I call myself out for it and correct it. I’m not editing the original post, though. Let it stand, throughout all time, as a burning beacon of my shame.

Secondly, in preparation for this and future parts, I scanned a bunch of random pages up to roughly mid-book. In so doing, as feared, the spine was damaged, so I hope all my non-existent readers appreciate what was sacrificed for them.

Thirdly, there’s a lot of interesting stuff in this book. That may sound odd – why review it otherwise? – but despite owning this for… I have no idea, certainly since before I moved to Indiana, which means, more than 15 years, I really haven’t looked at it in depth. I have, literally, over 3,000 RPG items, not counting magazines like Dragon and Space Gamer. I am collector/archivist, which sounds better than pack rat/hoarder. A lot of my collection is lightly skimmed, at best. So unlike my Arduin, Booty And The Beast, or Necromicon series, which were close re-examinations of things I read to death back in High School (when I couldn’t exactly afford to buy everything that struck my fancy, so the things I did acquire were particularly precious, yesss, preciousss) , this is more of a voyage of discovery, for both myself, the author, and you, the non-existent reader.

So let’s discover, shall we?

Phantom Of The Dungeon

Back in Part I, I started looking at the Phantom class. Surprisingly, this did not involve dressing up in purple tights and starring in a movie I liked but which everyone else has forgotten. To continue from there, we will skim over the various primary and secondary phantasmal abilities which a character might choose as they level up.

Or, “Materialization And Others”

Phantoms normally communicate with telepathy, which has a limited range of 100′ + 50’/level. They cannot hear normally, but can choose “Clairaudience” as a Primary Ability, which lets them hear all sounds within 100’/level. I suspect if these rules are used in actual play, enforcing the “No, you didn’t hear that” rule for every gods-damned sound would very quickly grate on the players and it would be houseruled out pretty quickly. Given how few Primary Abilities you get, blowing one on Clairaudience (while it does allow you to ‘hear through doors’, as it were) would be a waste, especially since you could get the far more useful Clairvoyance.

Materialization, though, is probably the first ability anyone will actually take. This lets you take on corporal form, with some limits – your physical abilities and hit points are down to 1/3rd of their pre-death values, among other things. There are also strict limits on the length of time you can manifest.

As a side note, casters will benefit a lot more from being a phantom than non-casters, yet another aspect of the BMX Bandit and Angel Summoner problem endemic to D&D-styled games (but this is also part of what defines D&D, and removing it, even with the best of intentions, leads to massive blowback from the player base.) Casters who materialize can cast spells if someone hands them the material components (and can cast spells without said components when not materialized). Non-casters might be able to fight, but with 1/3rd stats? And needing to put on armor and weapons in the limited time they’re materialized? Yeah, no.

Mortal Shadow sounds cool, but all it lets you do is appear as you did before death, even in full daylight! Are you excited? I’m excited! Yeah, pick that one or, say, Turn Living, which, obviously, lets you Turn Undead, except, for the un-un-dead? Oooo…. that’s tough. I’m thinking.

You get a total of 5 Primary Abilities by 9th level, +1 per any additional levels.

Since phantoms are supposed to be bound to the mortal realms only until they complete some goal that kept them from moving on, I doubt anyone will make it to higher levels if the GM is enforcing the thematic rules, unless the players conspire to avoid achieving their goals. “Yeah, yeah, we’re going to the Icethorn Glacier to kill the Frozen Overlord. We’re just… buying supplies. On a tropical island. Two years journey in the opposite direction.”

You get fewer of these, and they come later in leveling up, which seems kind odd… except these are more powerful and useful than “Primary Abilities”. I dunno, I’d have called them “Lesser” and “Greater” powers, or perhaps “Basic” and “Advanced”, but I wasn’t consulted. I was learning Pascal at the time. And living on the other side of the country.

Cause Fright: Allows you to selectively terrify beings within 100′. Hippie potheads and their talking dog save at -4.

Telekinesis allows you to move objects around, useful as a non-materialized phantom otherwise can’t.

Other abilities include Vapor Control, Mirage (create an illusion), and Variable Image, which allows you to manifest as something other than yourself.

In general, the abilities (other than perhaps Involuntary Possession) don’t have obvious direct combat benefits (which fits the entire theme of the class), but can be useful in the hands of a clever player. If the player is too clever, there will be endless arguments with the GM over exactly what can and can’t be done. (As a for-instance, Telekinesis gives the weight you can lift, and the range, but is silent on how fast you can move an object, or how much control you have. Does it let you swing a sword effectively? Or move a rock fast enough to do damage? But these kinds of debates were endemic to all games of this era; I’m not singling out Book Of The Dead.)

The introduction to the Phantom Magicks section directs you to the Dragon Tree Spell Book, where various magic… er… magick systems are discussed. You can use these spells with whichever of those systems you prefer.

Your phantom will get 1 “magick” per level up to fifth, and two thereafter, and must choose “magicks” of their level or lower. Limitations on uses/day, etc., are determined by the “magick” system you are using.

A few of the possible spells are:

Insanity: Causes temporary insanity, of a type determined by referring to “The Handbook of Tricks And Traps”, also published by Dragon Tree Press. You can’t fault their marketing acumen.

Gremlin: Causes malfunctions in technological artifacts and devices, with “effectiveness proportional to the complexity of the device (GM adjudicated)”. I have no idea if that means it’s more effective against more complex devices, or less. I’m inclined to “more”. And in case you were wondering, mixing high tech into high fantasy was totally part of the assumed setting in older games.

Project Aura: Allows the phantom to create a false aura around a person or object. Between this and the several abilities relating to detecting, masking, or viewing auras, I suspect a lot of the gameplay of the authors involved detection spells and ways to foil them, forming an “arms race” of ability/counter-ability that was, again, very much a defining factor of this era. 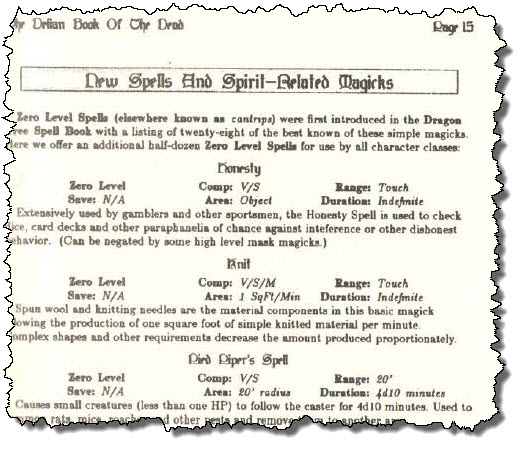 Some Random Cantrips That Have Nothing To Do With The Book’s Theme. Forget It, Jake. It’s Old School. (And It’s Glorious)

So, after discussing how a character might resist the tug of the Unknown Country, and detailing how their incorporeal form might aid their living compatriots in the completion of their goal, we get to spells for knitting.

But, believe me, I understand. This was long before PDF publishing, web forums, or even newsgroups. If you published something cool, like cantrips in the Dragon Tree Spell Book, and came up with a few more, what would you do? Wait around for years to publish Dragon Tree Spell Book II: The Legend Continues? No! You stick your new cool stuff in the next book you print, because you can.

I am a fan of low-level utility spells and have been a bit disappointed that the dozens of specific trivial spells from classic AD&D 1e (and derived works, like this) were replaced by the generic “Prestidigitation” spell. Sure, from a game-design and “actual play” perspective, it makes perfect sense, especially given the greater utility of “0-Level” spells in 3e and onwards. No one will choose “Salt” over “Detect Magic” when selecting cantrips/orisons, but an all-purpose utility spell is slot-competitive. Nonetheless, there’s a bit of charm lost, at least for me.

Granted, the Delian Book Of The Dead (And Other Things), may take specialization to a level not seen since some of the later supplements of Rolemaster Second Edition, which had, well, this:

This Want To Level 50. “Resist Perspiration” Was a Level 15 Spell. You Need To Know This.

Among the spells listed are Knit, which is distinct from Seam, and Honesty, which checks dice, decks of cards, and so forth for tampering. This strikes me as a useful spell, and one which deserves to be updated to modern-day standards of cantrips. Maybe I’ll do that.

This section of spells can be used by any casting class, unless you’re playing one of those inferior systems (in other words, not using the Dragon Tree Spell Book), in which case, they’re Magic-User spells.

Commune With Spirits: This spell allows you to talk to your whiskey bottle, as it’s the only thing that understands you, anyway. Or, it can let you talk to “any who have Passed Over”, provided you know the spirit in question. It, like several of the spells here, has a duration of “immediate”. This is, to say the least, unclear: Does this mean the spell takes effect immediately but lasts until you’re done chatting?

Dispel Relative: This may be one of the most useful spells ever scribed. If you are haunted by the ghosts of your family (the spell was first developed by a mage whose dead mother kept manifesting to tell him to clean his room), this dweomer will remove the ghosts of those who are blood relatives of the caster. (In-laws, it notes, require a cleric and Banish Spirits.) It occurs to me that a GM could have a lot of fun by having the player fail to affect the ghost of their father, while the spirit of the stableboy is sent fleeing back to the outer realms…)

Oh, this is a “3th (sic) Level” spell. Overall, the grammar/spelling error level is pretty low, compared to older small-press supplements (and a few newer small-press books) , but I have to get my digs in where I can.

Transfer Ectoplasm: By spending some of their own hit points, the caster can allow a spirit which is “ectoplasmically exhausted”, if you know what I mean, wink wink, to materialize. Said hit points can only be restored by time and rest, so you can’t keep a spirit manifested for an excessive period by a cunning application of clerical magic.

Arrow of Anger: A single-target, third (not 3th) level spell that does 1d4/level points of “psychic” damage to both spirits and mortals, attacking Armor Class 10. This is much less than fireball or lightning bolt (1d6/level, both affecting multiple targets), which were the go-to spells once you got to cast them (and represented a significant jump in the effectiveness of casters in classic games), but it affects spirits, and, in a nice touch of balancing, isn’t useless against non-spirits, just somewhat weaker. One reason that lots and lots of cool spells never saw actual play is that a cool spell with limited utility would always lose to a less-cool spell of more general applicability when your total loadout of spells was limited.

That’s enough for one day, methinks. Next time, we plow through clerical spells, and then, the archeologist class!