In Which We Start With A Killer Carpet, And Move On From There

Also Contains Scorpion Men, Who Do Anything A Scorpion Ken. Er, Can.

I’m also using the new “Gutenberg” editor for WordPress, which is utterly confusing. Why can’t anyone make a truly WYSIWYG WP editor that lets me do things like set any text to any font I have installed, format some text visually, right-click it, and save the settings as a style that will show up in a “Style” menu from then on, etc? It’s utterly ridiculous, in this Year of Our Ford 2018, that I need to hand-edit CSS to do anything the “template” doesn’t want me to do.

Ochizauma: Look at the picture. It’s one of the unending parade of “things that look like other things” in classic D&D, because apparently everyone forgets a mimic can look like anything, not just a chest. (A GM of mine had a very nasty encounter with a templated mimic that was disguised as the bed in a fancy inn. I mean, he ran that encounter for us. I don’t think he had that encounter. But I’m not making assumptions.)

This thing will paralyze you and fly you back to its lair, where it feeds you to its kids. Presumably, they look like doilies or hand towels or little decorative throw rugs or something. I’ll bet there’s a good market in breeding them for color and style, then killing them, skinning them, and selling them.

By the way, it was at this point I gave up on the “Gutenberg” editor, which would not even allow me to do what I just did above, put a little top and bottom border over a letter. Why the farking fark does everything “new” need to be simplified, feature-stripped, dumbed-down, simplified, I said simplified already but I’m too pissed to go think of another word, and otherwise bowdlerized to constantly lower the common denominator until you’re dividing by zero????

Plaguebringer: An infectious ape. Basically, it’s a generic sack of hit points with weak melee attacks. When it dies (which will be a tedious affair, as it has 10 HD but does nothing interesting while you whittle it down), everyone within 2″ will make a save vs. poison or become diseased. What disease? Hey, you expect us to do all the work for you? Disease, you know! The kind you get sick from! Sheesh, bloody whiners have no imagination or creativity, expecting us to specify “what disease”. The nerve of some people!

(The writeup rather oddly spells out “inches” instead of using the symbol “. I am sure this led to at least one argument, despite the use of “inches” to mean “10 feet” (or 10 yards outdoors, in earlier editions),or “5 feet” in post-2000 editions, someone will try to claim that by writing it as “inches” instead of “, the author meant literal inches, not game-inches.)

Purifier: A seven-meter grey ooze that has no attacks unless you enter its body. If you do, you take 1d6 damage and are cured of all poisons and “impurities”. There are, naturally, no real mechanics for how or if you can escape its body once “enveloped”. (It is worth remembering that, at the time, most poisons were simple “save or die” with no extended duration. So, while this creature sounds like a useful encounter, or a puzzle to be solved to remove a lingering effect, it didn’t really mesh with how poisons worked in the game back then.) 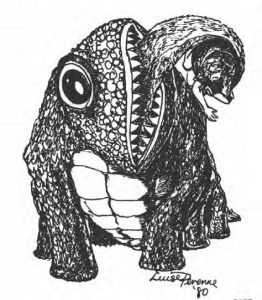 It Makes A Quarang-Quarang Sound When It Smashes Its Jaws Together. Really. That’s How It Got Its Name.

Reforcer: A hairy hill giant which can only be hit by non-magical weapons, and is immune to spells. Sure hope your party of munchkins has an ordinary longsword somewhere in their golf bag of magic items.

Robotic Vulture: A robotic vulture. Eight foot wingspan, made of iridium, and a 70th level… yes, I said, “70th”… “seventieth”…  yes, that’s right… Techno can reprogram it. (Hopefully, that link goes to the article that discussed the Arduin Techno class.)

Sacnoth: A 40(!!!) HD dragon which is invulnerable except for its nose. Exactly zero words are spent describing how to target the nose, or if it dies instantly if you hit it on the nose or if you have to somehow wear it down with interminable nostril-aimed attacks. It’s immune to all magic of 10th level or less (remember, officially, spells didn’t go over 9th level, 7th if you were a cleric, druid, or illusionist), and has a 50% change of turning (as per the ring of spell turning) any spell of higher level, because 11th level and higher spells were totally a thing. It exists primarily to be turned into magic shields and a sword, and the bulk of the descriptive text is spent detailing the properties of the magic items you can make from it if you somehow figure out how to kill it. Now, go read some Old School Revisionist stuff about how “old school” was all gritty, low-power, scrounging for copper pieces, “fantasy fucking Vietnam”, and laugh. Laugh hard.

Thank you, folks, I’ll be here all week.

Skorpadillo: When an armadillo and a scorpion love each other very much, they give me an excuse to use the same tired gag I’ve used before when one of these random hybrids comes up.

Sluggoc: A giant (24 to 40) HD slug, which is easily found because it leaves a trail of slime behind it, just like $POLITICIAN. Hah! Cutting edge political commentary here, folks! I know a lot of people support $POLITICIAN, but I don’t care, I’m going to courageously sound off against $POLITICIAN, as they are a bane on the nation. It’s immune to fire and blunt weapons. The sluggoc. Not $POLITICIAN. Probably.

Smik Lat: Despite sounding like the “real name” of a Legion of Superheroes member (Given Rokk Krin, Garth Ranzz, and Tenzil Kem, it fits right in.) , this is a flying eyeball with arms, a sucker mouth, 19 Hit Dice, and… Nineteen? Really? OK, those of you who are used to post 3.0 D&D may not think a 19HD monster is at all odd, but at the time ATWM came out, the standard bearer, AD&D, tended to top out at 11 HD for huge, ancient red dragons. Greater gods, which you allegedly weren’t suppose to fight[1] had 300 HP… not HD. Asmodeus had 199 hit points. The barrage of critters will 15, 20, or more HD in ATWM tells you a lot about the kind of campaigns they were running back then… how the game was really being played by people there at the time. (Which includes me, I wish to note.) See my rant on the sacnoth. And, yeah, the same rant scattered hither and yon throughout this series of articles, the Arduin articles, the Booty And The Beasts articles, and all my other articles on what I call the “Burgess Shale” era of D&D history. I know I repeat myself on this topic, but I figure few people are going to read every article I write (hell, I figure few people read any article I write) and so, I will drag my favorite dead horses with me from one page to the next, delivering them a fresh beating each time. (And, yes, I have repeated my rant about why I repeat my rants. Rantception!)

Oh, you can make shields from the Smik Lat’s corpse. Oddly, it’s not by the same person who made the Sacnoth. Oh, the Quarang Slasher also has text on what kind of magic items you can make from its hide. Three different people (maybe more, I don’t feel like going back to reread every entry) included “this monster is raw materials” text. This tells me that, for some groups, for some period “making stuff out of monsters” was, like, a thing.

Still have a lot “S” to go and I’d rather post something after a long break than wait for more free time to magically arise, so, that’ll have to do for this week.

[1] A lot of people considered Deities & Demigods to be “the high level monster manual”. If it has hit points, we can kill it, and if we can kill it, we should kill it. And take its stuff. That’s D&D in a nutshell. And that’s just fine with me.