What Do You Mean? Nine’s As High As Spells Go

Nope, These Go To Twelve 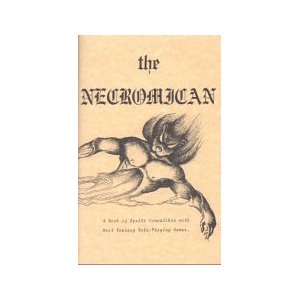 This booklet shows off one of the best parts of Old School Gaming — sheer over-the-topness, for when Power Word Kill and Wish just aren’t good enough. If you’re fighting galactic dragons, after all, they’re not! Forget all that Fantasy Fucking Vietnam and “let’s pour water on the floor and see how it pools” crap. In this kind of Old School play, if you wanted to find a pit trap… nah, you never wanted to find a pit trap. You were too busy casting Summoning Of The Black Hole. Not a euphemism.

As usual, this will be a selected subset of the wonderment that lies within, not an exhaustive repetition of the contents.

This spell creates 1-4 duplicates of the caster, without his magic items. It’s not clear if this means that if he’s wearing a magic wizard robe, and nothing underneath it, his duplicates appear with a non-magic version of the same robe, or naked. I suppose it depends on the emotional maturity of the DM and his fellow players. Given the state of gaming culture at the time…

The spell also notes, wisely, that duplicates cannot duplicate themselves. Hey, it was the first thing I thought of, and I guarantee you that line was added after the first time the spell was used in play to create Infinite Magic Users, presumably with infinite warty thingies. (Would “Infinite Warty Thingies” be a good name for a band? Probably not.)

This spell create a 10′ by 10′ by 10′ cube around the caster. Each face of the cube is a “portal into deepest outer space”. So, someone shoots an arrow into the cube, it goes into space, and possibly hits a small space-worm, who just says “Oh no, not again.”  Anyone charges at the caster, they’re tossed into space. It’s a one-way trip; the cube can’t be re-entered from the space side. It’s not clear, from the description, if the caster can fire out of the cube or not, which is kind of key. If they can, they can sit there like an artillery unit and blast the crap out of things. If they can’t, this is mostly defensive. 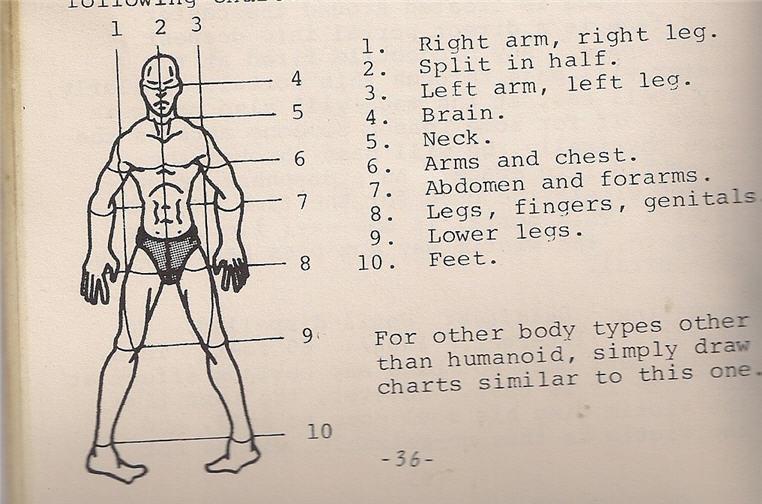 Roll To See What Drop Off

Why should Gary Gygax be the only one to rip off Jack Vance? This spell is actually closer to the one in the Dying Earth novels than the AD&D spell of nearly the same name. Perhaps that’s why this one is the Excellent Prismatic Spray. (Coming soon: Enterprise Edition Prismatic Spray, Prismatic Spray Lite, Prismatic Spray for Workgroups…) Anyway, you cast this spell at a single target, and it dices him into 1-10 pieces, and you roll on the accompanying chart to see which pieces they are. For non-humanoids, you are instructed to “simply draw charts similar to this one”.

It’s kind of worth noting that there’s no specific rules for the damage done by any part being lopped off, or any other effects. “OK, you’re dead.” “Why?” “You got both your legs chopped off! And your thingie!” “So, I didn’t take any damage.” “Yeah, but you’re totally bleeding everywhere!” “Since when? You never bleed from wounds in D&D. I just have to crawl!” “No, you’re dead!” “Are you still mad about that pizza thing? I told you, I thought you’d taken your slice. Give it a rest, man.” Also, does a roll of 8 mean you lose your fingers? What if you were holding your hands in a different position, because, like, I totally was. My hands were nowhere near that ray.

When this spell is cast, the players stop seizing every opportunity to make lame double-entendres and try to reasonably evaluate rules conflicts without rancor or hostility. I seem to have constantly saved against it.

The Jaws Of Set

OK, so, this is awesome. Giant invisible snake jaws appear, biting your enemies for 1-100 points of damage. 100 hit points (remember, this was an era when the largest red dragons had only 88 hit points), moves at double speed, teleports without error, and has AC 2+2, which is AC 0, not AC 4. If you don’t understand why, you’re not Old School. N00b! The summoned jaws last until destroyed, which means, you’ve got invisible jaws that do 1-100 damage and can teleport to any point you wish and go chomp. I wouldn’t memorize any other 10th level spell. Seriously, can you imagine having… wait, how many 10th level spells do you get, anyway? There’s no rules for magic-users in this book, and none of the official D&D books gave you more than 9th level spells, no matter how high level your character was. Sigh. Yet another example of where the local house rules were so internalized the authors forgot to include them.

I can only imagine this spell was created by DMs for use against players. It targets a magic item, and de-magics it. To restore the item, you need three simultaneous wishes, each cast by a magic-user, not from a scroll or item. This reeks of the got-you-last one-upmanship that most Monty Haul games reached in their final stages. It was very rare for monsters to have magic items in those days, so this is either DM vs. player or player vs. player magic. As is…

Simply nullifies all magic items, weapons, armor, power, and abilities for 1-6 rounds, save for half duration. Again, the main focus here seems to be to let the DM kill a player… I mean, a character… who is wrapped in so many magic items they can’t be easily thwarted.

Call Of The Comet

You call a comet. You designate a landing zone within 240′ of you when you cast it, then skedaddle. 1d6 days later, a comet appears. Based on the roll, it can be anything from pea-sized, doing 1d6, to 100′ feet in diameter, doing 100d6 and leaving a mile-wide crater. (Presumably, it does the damage to everyone within a half mile of the impact point.)

Probably really sucks if you wait six days then get a comet that’s about as impressive as a slingshot pellet.

For the mid-range effects, a standard issue fireball does about as much damage and doesn’t take days to show up. This spell is one of those “But.. but… it’s a comet!” things, where the sheer awesomeness of the concept distracted the designers from the utility of the spell itself.

This spell causes 10 x the caster’s level people within a one mile area to go insane, rolling on a chart to determine Paranoia, Schizophrenia, Sexual Perversion (what? No detailed subchart for that? Son, I am disappoint), etc. The description notes that it’s useful for livening up dull little hamlets. (And possibly dull little MacBeths, I suppose. Badum BUM!) 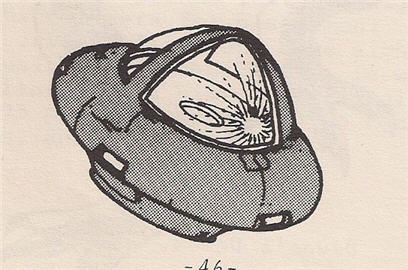 So, how do you get into space to fight Galactic Dragons? With this, of course, which makes this an amazingly stupid spell to cast. Why give the DM any excuse to throw one of those TPK nightmares at you? Anyway, conjures spaceship, magically controlled flying saucer, top deck is good for cocktail parties which are things the typical D&D player of 1978 may have heard of but would never be invited to, speed is 10 million MPH, which pretty much means it’s limited to in-system travel (kind of surprising, really, you’d think there’d be an FTL drive. Maybe the designers thought that wouldn’t be realistic. You laugh, but I’ve seen far sillier debates).

Ah, now we’re getting somewhere! Uhm… no we’re not. This spell kills 10 times the caster’s level in humans. (Only humans? What if I want to destroy the Elven Menace, before they destroy us?) Assuming that casting 12th level spells requires being 24th or 25th level, that’s still only about 250 people. That’s not “genocide”, that’s “a typical summer in Chicago”. There are many less powerful spells that will kill many more people. The spell also notes that “a save results in no effect”. Does this mean each target saves individually? Damn, that’s a lot of rolling.

This spell conjures ham, pickles, assorted mustards, and… no, wait. This spell creates a square mile of Evil Forest, which is exactly what you need to surround your Evil Wizard Tower. It springs up overnight, and also gives you 1-100 giant spiders, 1-100 evil ents, and 1-100 orcs, all under your control. Nothing in the spell description says it can only be cast in specific locations, so I’d cast it in the heart of a major city. In one night, the entire city is destroyed by the magical trees, and the survivors are hunted down by my spiders, ents, and orcs. Bwahahah! I’ll bet I kill a lot more people than that “genocide” spell does. Oooh, what a misnomer! I’m still pissed at that. Nearly as pissed as I was that time I went into the “Virgin Megastore”. Talk about false advertising! Where was I?

This spell lets you pick someone else to be the target of any soul-draining effect cast on you. There’s no indication they need to be willing, or get a saving throw. The possibilities for amusement should be self-evident.

Summoning Of The Black Hole

A black hole is summoned. All in the area are sucked into it, and deposited into deep space, requiring three simultaneously cast wishes to bring them back. Presumably, they also get killed in the process of going through the singularity, though that’s not spelled out. (Argument time!) Those who do make their save are merely compressed to a piece of matter about a millimeter in size. I’d guess you only need a single Wish, or even a bog-standard Resurrection spell, to restore them to life.

And So, It Ends

Thus, we come to the end of the Necromican walkthrough. I really wish Fantasy Art Enterprises had made more books. There are rumors some of them went on to real jobs, or might have met girls, or otherwise were distracted from producing works of singular awesometude. Sic transit gloria mundi.  (“Gloria is ill on the subway on Monday.”)

Oh, and this is for an earlier spell, and I think I may have included it anyway, but, just in case I haven’t, here it is: 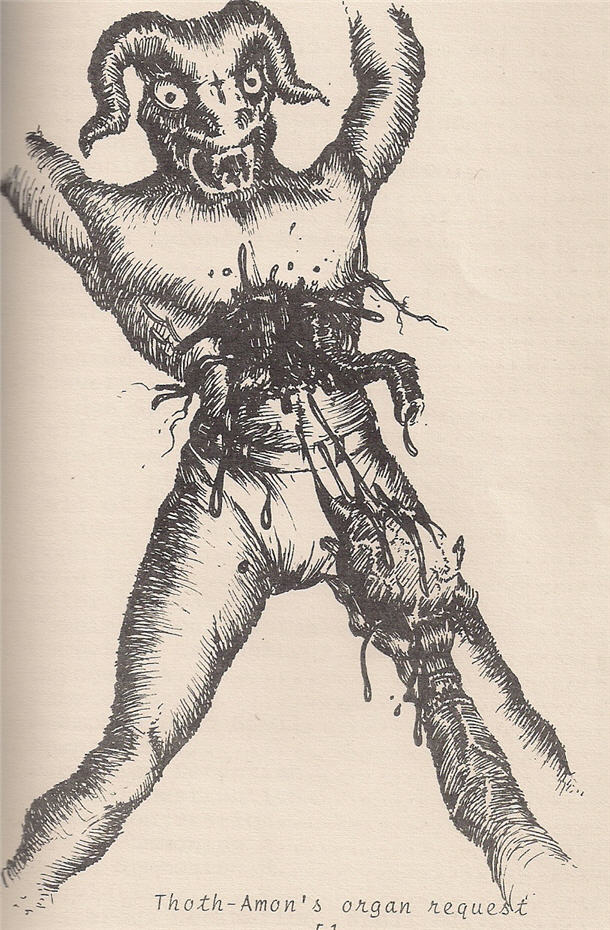