Booty And The Beasts, Part III: Creatures Of The Air

What’s Not To Love?

Welcome back to the third installment of my walkthrough/review/look at “Booty And The Beasts”, a classic unofficial Dungeons & Dragons supplement from the late 1970s. The earliest days of roleplaying games were filled with serious high weirdness, unfettered by such shibboleths (I think the shibboleth is a 12 hit die monster that lurks on the astral plane, but don’t quote me) as “balance”, “playability”, or “common sense”. In short — they were totally freaking awesome, dude!I somehow managed to be a teenage Dungeons & Dragons player throughout the 1970s and early 1980s without smoking pot or listening to heavy metal, but books like “Booty And The Beasts” provide a sort of psychic contact high (and, I guess, contact deafness).

Finally got Ye Olde Scannyr working, so I can provide some excerpts. This is important, as one of the greatest things about this book is the Erol Otus artwork. Erol’s art practically defined the zeitgeist (that’s a type of lesser demon, usually found on the 19th and 20th levels of the Abyss, treasure type Q) of the era, and I think you can pin the point at which D&D started to “grow up” at the time when TSR decided his services were no longer required.

Since I know the short-attention span types of the web don’t read much unless they see pictures to break up the text, here’s an Egg Person from Venus: 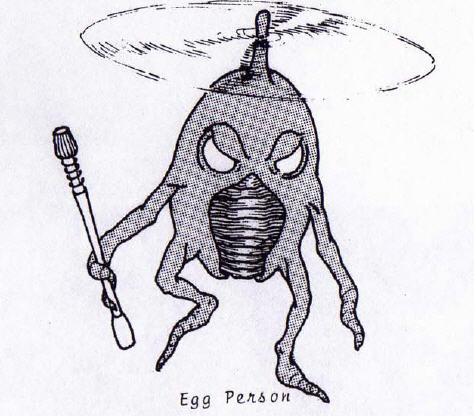 Red on to learn more about him! Her! It! Whatever!

Creatures Of The Air (And Space) (No Museum)

(As a reminder, I am not listing each and every critter, just a selection to provide a sense of just what’s so amazingly cool about this book.)

Pretty much “What it says on the tin”. They’re egg shaped people. From Venus. They have propeller heads. They are the “epitomy (sic) of inconspicuousness”, who want to avoid all other beings, but they are also imperialistic, and it’s hard to conquer people if you’re hiding from them, so, they build androids or send out agents to do their bidding. This is, by the way, a completely useful and viable trope and you could build a pretty good campagin around some hidden race that was equipping minions with high-tech gadgets and conquering lands, and the players would slowly uncover the truth and work their way to the secret lair of the strange invaders, and then, at the climax, you’d show them the picture above, and then they’d all fall over laughing and strangle you. Hey, it would be a better ending than most of my campaigns.

You would think that D&D’s 10 color-coded dragon types, each with 8 life stages, plus two dragon gods, would keep adventurers busy for a long time, but one of the most active industries in the early days was churning out new types of dragons, and anyone who thought too hard about what kind of ecosystem would be needed to support such beasties probably stopped playing D&D and moved on to Traveller or Chivalry & Sorcery. So we had purple dragons and spotted dragons and lime green dragons, and I’ll bet if there were more female gamers in the era, we’d have eggshell dragons, pearl dragons, snowfall dragons, and feathery lilac dragons instead of just white dragons. (Y’see, those are all the names of colors found under “White” at the Sherwin Williams site, and there’s this old joke that women see a lot more colors than men, so if there were more female gamers we’d have seen… yeah. Fine. Moving on.) The Radium Dragon is a 20 hit die critter with glowing white (or perhaps corona, or snowberry) scales, and anyone within 30 feet must make a saving throw (against what, not specified, but I’ll guess dragon breath or maybe poison?) or suffer radiation sickness, the effects of which are detailed over the next several lines. Four times a day, it breathes superheated radioactive fallout, and normal weapons melt when they hit it, and when it claws you, you get instant cancer, and you roll on the random body part table to find out what just dropped off. For real fun, I recommend swapping in the justly infamous hit location chart from Aftermath — location twelve, anyone? Heh heh heh.

The best thing is… this isn’t even close to being the most over-the-top critter in this section. 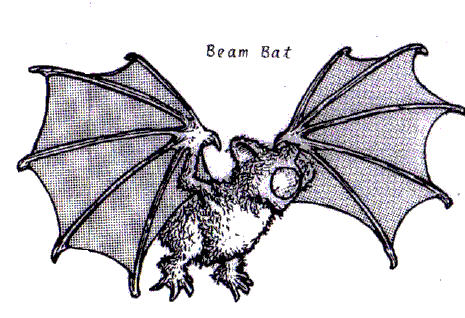 The beam bat is not over the top. Not really. It’s a measly 6 hit die critter, and all it does when it hits you is halve your Constitution for a week. That’s all. Oh wait,I misread something. It halves your Constitution if you make your save. If you don’t make your save, it drains all the blood from your body, presumably killing you instantly. And people whined about how D&D 3.x was all “save or die”!

A merry prankster, it likes to swoop down on you, grab you, and drop you from 100 feet. (10d6 falling damage back then). With 5 hit dice, it presumably mostly went after low-mid level characters, who would be lucky to have 25-30 hit points. Average damage from 10d6 is 35, so, pretty much, this was another variant on “save or die” — the gargoyle has a 4 in 6 chance of surprise, and, if he gets it, attacks with a +3 probability. Sucks to be you… but not for long. How long? Well, 32 meters per second per second… you do the math. And then start rolling up a new character while your “friends” go through Sir Splats-a-lot’s body seeing if his magic items made their save against falling damage (AD&D First Edition Dungeon Master’s Guide, page 80.)

Speaking of whimsical, some people might be wondering what the frak kind of order I’m plucking these monsters in, and the answer is “the order they were written”. They are not sorted by name or hit dice within a given section. Another sign of the times.

They wield magical items and do 2-12 damage with their legs. Other than they, they’re only here ’cause of the picture. 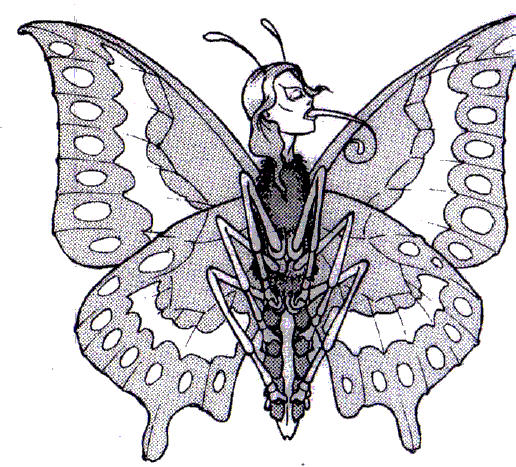 Butterfly Person. No stats given for caterpillar person.

Ok, someone rolled a critical failure on the “Imaginative Name” chart. These creatures have 1 to 4 hit dice and… oh, smeg it. Here. Picture. Moving on. 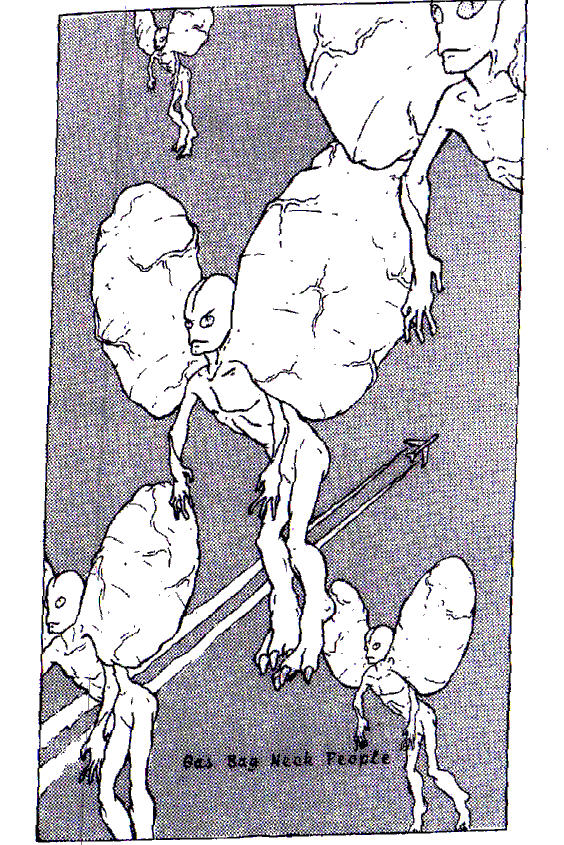 Please note the jet plane in the background.

It’s an eagle. With the head of a bee. If anyone had any doubts where my “muse” comes from, especially for Earth Delta (plug plug plug) , you now know. And knowing is half the battle. GI Joe!

Just to be clear, here.

BTW, the blue wash was an accident of how I captured the image, but I thought it was cool, so, I kept it.

Anyway, the galactic dragon (singular, like Bahamat and Tiamat, though Bahamat and Tiamat are like little cuddly dragon kittens next to this guy) is “feared even by the gods” but cannot enter planetary atmospheres. It has 200 hit dice, Armor Class 0 (which really isn’t that impressive, then again, it’s not like you could miss it). Three times a day, it breathes a blob of anti-matter that expands to one mile diameter at five miles of distance. Anything caught within the blob must save, with no plusses, or be utterly annihilated, requiring one to ten simultaneously cast wishes to revive him. Yeah, old school gaming was “heroic, not superheroic” and I’m 6’8″ tall with washboard abs and a bevy of supermodels at my beck and call. Monsters like this were created because players had characters who could deal with them (or the DMs were desperate to kill off the uber munchkins who had already worked their way through “Gods, Demigods, and Heroes” from Apollo to Zeus. Sure, there were low-power, gritty, realistic games with rare and mysterious magic, heroes who mostly fought “common” mythical creatures like ogres and goblins, and a clearly defined pseudo-medieval setting only slightly touched by high fantasy. We had a word for such games back in my high school: BORING! Dammit, if I can’t play a phraint techno with a lightsaber fighting cyborg centaurs, then what’s the point?

If you are fortunate enough to save against the anti-matter cloud, you may be teleported 1-10 light years, merely be disintegrated (much easier to raise), or “become antimatter”, the exact effects of which are up to the delightful sadism of the DM. It is a simple fact that the DM in this case will be a sadist, because, if you’re fighting the galactic dragon, you have clearly driven the poor man to the brink.

And this brings us to the end of “Creatures Of The Air”, but by no means the end of “Booty Any The Beasts”. Tune in when I get around to it for Demons! Including the Queen Of Lust! Warning: There will be nipples! Lorraine Williams can bite me.