Being A Gen Con Purchase

That Was 30 Bucks For A Small Pamphlet, When I Was Also Scoring 256 Page Hardcovers In Full Color For That Much

But It’s One Of The Few Quasi-Arduin Books I Didn’t Have Already, So, It Was (Probably) Worth It

I say “probably” because I haven’t cracked it open yet; it’s just been removed from its ziplock bag. Will it be filled with wonders beyond imagining, the brilliantly nonsensical stuff of what I pretentiously call gaming’s Burgess Shale era, or will it be tedious and flat, filled with square roots and fractional exponents? (Yes, kiddies, at least one game — KABAL — used fractional exponents in its calculations. I’ll get to that one eventually.)

But first, something of an apology. I hadn’t meant to let quite so long go between updates. I have been doing quite a bit of work on Earth Delta, but not enough to justify posting another “alpha”. And I’ve been thinking about other things to post, so much so I seem to have convinced myself I must have posted during the interim, at least as much as a post-Gencon boast, but, evidently, I did not. So to my imaginary readers, I apologize.

Those who enjoy this might also enjoy my walkthrough of a similar, but more gonzo (so far) work, the Necromican (not Necronomicon) 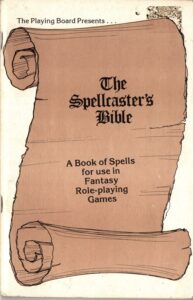 “For Use in Fantasy Role-playing Games” Means “For Use In D&D And Games That Might As Well Be D&D”.

We begin with some fluff text about how this book was originally the creation of an evil wizard named Parlan Blackstone, who was so evil he died… erm.. saving another wizard’s soul from Lucifer. That’s, uhm, sort of the opposite of evil, I mean, unless you were trying to get the soul for your own purposes and Lucifer would have treated it better. (I suppose, in an abstract way, that if the other mage’s soul was legitimately destined for Hell, and you prevented it from getting there, you’d be interfering with justice, like helping a lawfully and justly convicted criminal break out of prison, so they can crime some more. Usually, though, “he died saving someone else’s soul from hell” is not the mark of an “evil wizard”. But I digress.

Anyhoo, this work, originally known as Parlan’s Bible, was passed from one high-level caster to another, until it became known as “The Spellcaster’s Bible”, whereupon it reached “The Terrestrial Warlock”, who decided it should be published for all to see. Except (and I am not making this up), for anyone not a pure mage, such as a Fighter-Mage or an elf or other “mixed classes”, who would be damaged by reading it. This attitude is a little problematic these days. But, hey, I’m sure some of his best friends were elves.

Then follows a list of the various mages who contributed, such as “Menedor Frealof” and “Lucanor the Ringwearer” (who is not to be confused with “Ganturath the Ringwearer”) (also listed), and an invitation for other wizards to send their name for inclusion in future volumes.

This section promises to answer the questions of “How often can a mage throw a spell?” and “When does a mage get tired?”, which certainly had answers in existing “fantasy role playing games”, but which a lot of players didn’t like, and like irksome children or the customers I dealt with when I worked retail, simply ask the question again in hopes of getting a different answer. (By the way, anyone upset at whatever “lore changes” WOTC is pushing this week, let me remind you: The WOTC Ninjas will not sneak into your home and steal your books, then erase all your hard drives to wipe your homebrew information. You can just run your games as you like, replacing both setting and rules decisions you don’t enjoy with ones you do. And screaming at the people who do like them, as if they’ve inflicted some grievous harm upon you, is imbecilic in the extreme. Just make sure your female dwarves have beards. That cannot be modified. But I digress again.) 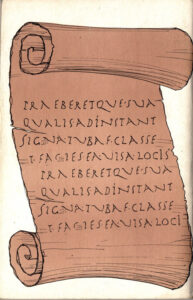 Where was I? Spell points, right, spell points. You “simply” add Strength, Dexterity, and Intelligence, and divide by 3, which is your “spell point increment”, which is how many spell points you recover per day. Then you multiply this by half your level (round up), and that’s your total spell points. This differs somewhat from most systems, in that a wizard can cast a fuck-ton of spells in one day but then take several days to fully recover. Most systems have full daily recover. I suspect that in actual play, this made the “Angel Summoner and BMX Bandit” problem even more pronounced, as it was usually fairly simple for a party to hide out somewhere for days, because murderhobos never get bored and frustrated holed up in a cave while the wizard studies for a week.

Now cometh the “simplest” part of the system, where the cost of a spell is the level, squared. So lemme get this straight. A pretty mediocre first level magic-user (Let’s say, Strength and Dex both 10, Intelligence 15), has a “spell point increment” of 8 (25/3). So they start off casting 8 spells a day (vs. the usual one). Being first level, they recover all of this each day. On the other hand, a high level wizard (10th level), with the same stats, has 40 points total, still recovers 8 a day, so a single 5th level spell (25 pts) costs him over half his allotment, and until he rests, he won’t be able to cast any spell higher than third level. A wizard with an 18 intelligence (but still 10 Str and Dex) will have an increment of 12 and a total of 114, so they can just barely manage one 9th level spell (81 points). Huh. This actually seems to reverse the typical progression, in that a high-level magic user is notably underpowered compared to the AD&D standard. (Of course, there were still a handful of low level spells that scaled with level in some ways, even more in third party books, so a clever player would find a lot of ways to exploit this. Magic Missile, for example, produced 9 missiles at 18th level, for 9d4 + 9 total damage per casting (remember, Lolth only had 66 hit points!), and under this system, such a wizard could cast that 114 times! (But recover “only” 12 points per day, for a total of 108d4+108 damage (12 casts). If they spend all their points on magic missile, that’s, lemme see, 114*9 = one thousand and twenty six d4, plus 1026, in that one day. Sure, it’ll take almost two hours — one minute combat rounds back then — but still. That’s a lot of total damage.

Page three features saving throw adjustments for higher level spells, so that 7th level spells impose a -2, 8th level a -4, and so on, up to 13th(!) level spells which get a -14, and then a note that you keep adding penalties for each level above thirteen, and so, not for the first time, and surely not for the last time, I give a well-earned eye-roll to Old School Revisionists who insist modern (by which they mean, now, over 20 years old!) versions of D&D are “video games”, and real (manly grunt) Old School Games were all kobolds & copper pieces where you tiptoed through the dungeons in terror like you were in, as one now-forgotten poster put it “fantasy fucking Vietnam”.

(Oh, to figure out spell range, you average your Strength and Intelligence and consult a chart. Figured I’d mention that.)

About time, right? Hey, it’s not my fault I ramble on incessantly dissecting every nuance of a 41 year old third party supplement. Oh, wait. Yeah, I guess it kinda is. Whatever. Let’s see what we got here….

Oh, on the page just prior to the start of the spells, there’s a chart for high level mages that goes up Caster Level 50 and spell level 25. This is when you send galactic dragons at them.

As usual, I’ll be picking a random handful of items I find interesting out of the lists.

Probably The Tracking Spell, Which I’m Not Describing

Body Spasm: If the target fails their save, they’re paralyzed by muscle spasms for one round. This is pretty fair for a first level spell, except for the part where it’s one target/caster level, but still keeps costing one spell point no matter how high level you are.

Control Body Temperature: Allows you to raise or lower your body temperature by 40 degrees plus 10 degrees per level. I guess this could provide protection from environmental heat or cold, if the GM was actually using such rules and you could convince them it would? Again, though, due to level scaling, you could make yourself hot enough to boil or freeze water pretty quickly. (At third level, your body temp. would be below freezing if you wished; at 7th level, it could be above boiling.)

Miscellaneous Detect Spells: (Seriously, that’s what it says!) An assortment of different spells (meaning they must all be learned individually) that all detect different things, such as Altitude, Poison, Traps, and… Walls. (“if blind”, it notes).

Magic Detection: This has a lower duration than “Miscellaneous Detect Spells”, and allows you to know “1-100%” of a magical item’s powers. (It does not detect “curses or ‘crocks'”, however.) Exactly what knowing, say, 47% of a Wand of Fireball’s powers means is anyone’s guess.

Spell of Bad Taste: Causes people to greenlight “Cats” as a movie in 2019. Or makes you taste good or bad to flesh-eating monsters, so they have a 10% chance per caster level to chase or ignore the target, as appropriate.

That’s All For Now

1600 words is a good breaking point. Tune in whenever I get around to it for the rest!