That Means Part III Would Be, I Dunno, Book of Mormon? Part IV Would Be, What, Dianetics or Something?

I’ll Burn That Bridge When I Come To It

Two weeks ago, which is less time ago than I’ve been doing lately, so that’s good, we covered Spellcaster’s Bible, Part I, consisting of random digressions about Old School Gaming and a smidgen of actually relevant content. You can expect the same today. Go read that article for background. I’ll wait.

OK? Now, let us begin! Or continue! Something.

The Bland Spell: This turns any ethnic cuisine, from Indian to Sichuan (apparently, that’s the new transliterated spelling) to Thai, into dull, flavorless, mush via the verbal component “Let’s move to Kentucky!” I speak from experience here. No, actually, it makes the caster look dull and boring, so that monsters will attack anyone else rather than you. You can’t move or do anything else while concentrating on this spell.

Plane Gazing: A favorite spell of contractors, this magically repairs broken window glass and… no, wait, that’s “Pane Glazing”. My bad. This lets the caster see on any one plane of life (emphasis in original). Generally extraplanar stuff doesn’t happen until much higher level, so maybe this is a way to provide low level spells with utility at higher levels (as many of them become useless, but you’ve still got a zillion memorized). It’s a bit confusing, too. Does it mean “The magic-user sees the astral plane around them as they stand on the material plane” or does it mean “If the caster is on the astral plane, they can see”? Since I’m not familiar with a general rule saying you can’t see if you’re on another plane (individual planes, of course, may hinder vision due to their nature), I’m going with the former. 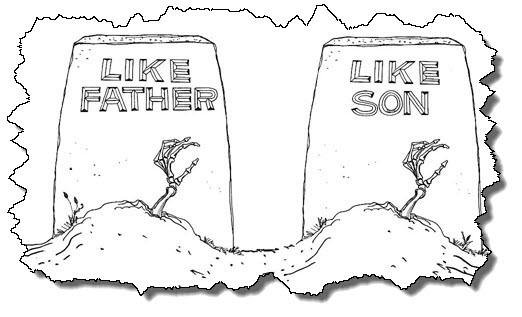 Sleeper’s Spell: A rare case where a third party spell is notably less powerful than an equivalent “official” spell — it puts 1 HD worth of monsters to sleep per caster level. Compare to the AD&D 1e Sleep. On the other hand, that spell simply didn’t affect anything with more than 4HD or so, while this can impact very high level creatures. Hold on a sec. Something’s weird. The first sentence says “This spell affects double the level of the caster…” (emphasis added) then as an example says a 10th level caster could put 10 (not 20) levels of monster to sleep. Old School, man. Who needs clear rules? I’m sure reasonable people can just talk it out and reach a mutually satisfactory conclusion.

(BTW, the image has no bearing on any text near it in the book. Just thought you’d like to know.)

Acid Spell, Alkalai(sic) Spell, Blind Spell: These all have area “as Cold Spell”. See below. The first two are the usual d6/level, save for half. The third blinds for “1 melee” (I assume this means “round”) per caster level, or save for half the time period, which is generally less useful. Being blinded for 5 rounds instead of 10 is nice in theory, but since you’d only use this spell if the GM loaded on penalties for being blind, it probably won’t help.

(So, digression (shocking!): I was curious as to what the official 1e-era rules for blindness were. I finally found them in the DMG, buried in the part discussing details of some spells that probably should have been in the PHB, but weren’t, so they were in the DMG as “special DM advice” not “stuff an actual person living in the game world and depending on magic for their life would know”. Anyway, the rules for blindness are found in the “Special Commentary For Referees” section for the spell “Light”. Not, y’know, under “Cause Blindness” or “Power Word Blind” or the illusionist spell “Blindness”. Why would you think otherwise? You fool! You foolish fool! The upshot of this long and pointless digression is that my posts are full of long and pointless digressions, but also, the effect of blindness is -4 to AC, “to-hit”, and saving throws. And to vaguely circle back to what I started with, that penalty for “half as long” is notably less of a “reward’ for making your save than half damage is. (And it further occurs to me that most offensive spells of the era didn’t require any “to hit” roll, just a saving throw from the victim, so technically, a blinded spellcaster is almost as effective as a sighted one going rules-as-written, but naturally, “reasonable people” would quickly find “reasonable solutions” and not spend hours screaming at each other.)

BTW, my solutions?
a) Saving against Blind Spell reduces all penalties to -1, rather than -4, as you’re merely dazzled a little.
b) Casting any spell other than one affecting yourself or a target that willingly lets you touch them requires an attack roll — using the attack tables for your class, with the -4 modifier, to get the right target. Failure places the target point somewhere random. “An empty space” has a base AC of 9, +1 (which means, -1, since lower is better) for every ten feet from the caster.

Oh, and a PS: The use of “alkali” as well as “acid” was an odd quirk I’ve seen in a few other supplements from this era, possibly because the writers had at least one chemistry major among them. It didn’t seem to last long, as mechanically, they ended up kind of the same way, and while most people have an intuitive grasp of “acids are dangerous”, deadly bases are less well known. “We shall dissolve the body in lye!” is about it, trope-wise.

Cauterize: Stops bleeding wounds, which really wasn’t a common mechanic back then (the bleeding, that is). I’ve just realized these spells aren’t broken down by class; there’s a default assumption it’s a magic-user, but cauterize is really more of a cleric spell, IMO.

Cold Spell: This does cold damage, 1d6 per level, etc. I’m calling it out because it’s the location of the area chart, which helpfully has graphs of the fixed-size areas the other spells noted may affect. Which is theoretically fine, except, they’re, uh, kind of useless. Unlike the various templates for spell effects scaled to a battlemat, these are just… well… 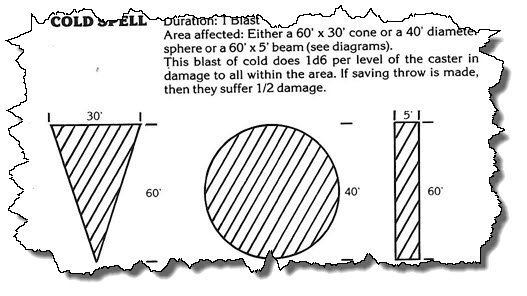 I mean, not to put too fine a point on it, you don’t really need a picture of a very simple geometric shape. If anything, it raises some questions — where’s the point of origin for the circle? Typically, but not universally, cones and lines start with the caster, circles start at a point farther away. But the spells give no “range”, just “area”. (Blah blah reasonable people blah blah.)

Empathic Aid: A healing spell which allows the caster to take some or all of someone else’s damage onto themselves. This is a classic effect that seems fair and fun at first, until you get some “clever” person who has a ring of regeneration (especially a fast one) or some other means of very rapidly removing damage, so they can heal the party to full after each fight (well, at least for this, you’d need to be able to cast it fairly often to pull that off). At the time, it was generally difficult to fully recover from combat; resource management was everything, natural healing was slow, and a cleric’s daily healing output often trailed the hit points a higher-level fighter-type could have, meaning, a full day’s spells might not restore a single PC to peak condition.

Lightening (sic) Spell: This spell does not reduce the weight of things (though there is a “Levitate Others” spell) but instead produces a “blast of lightening(sic)” that does, wait for it, 1d6 damage per caster level, save for half. Ayla Ranzz is bit irked.

Rope Work: Aka “Shibari spell” (My words, not theirs.) In addition to the obvious utility for bards, IYKWIM, wink wink, nudge nudge, say no more, this spell binds the target in a magical rope which can only be broken by “a strength equal to twice the caster’s level”. So, a 5th level caster’s rope can only be broken by a Strength of… ten. Color me unimpressed. While few monsters in those days had formal attribute scores, it’s likely most of the things a 5th level caster will encounter will at least arguably have a Strength over 10, even if not explicitly noted as such. I’m sure no one ever argued about that, either, what with all the reasonable people playing reasonably back then.

Sonic Spell: I never got into those games, or the increasingly voluminous lore (and the even more voluminous amount of fetish artwork, not that I’m judging), so I can’t make an appropriate joke here.

I’d hoped to do three levels, but two is all I have time for, and no matter how much I promise myself “I’ll just finish it up tomorrow”, the truth is, I never get to work on personal stuff except on weekends, so it’d be next week before I posted, except my Saturday has been ripped away by familial obligations, so even that is dubious, and therefore, I’m just gonna post now.