Well, Not Quite Weekly, But Less Than Two Weeks!

Let’s See How This Goes

Beyond The Fields Levels We Know

Welcome, both of you, to the next part of my review/walkthrough/rant on “The Spellcaster’s Bible”, an unofficial, Arduin-esque 1979 supplement for D&D fantasy roleplaying games. You may or may not wish to peruse Part I, Part II, Part III, and Part IV, but if you don’t, your enjoyment of this article will be only slightly reduced. (I mean, there’s not much room to reduce it, really.)

We now move on the Ninth Level spells… and beyond! Despite Gygax’s fulminations (ironically, I probably learned that word from Gary, along with ‘phylactery’, ‘milieu’, ‘antithesis of weal’, and ‘no, you can’t play a pixie/storm giant hybrid’), much of the ‘unofficial’ (or as he put it in The Dragon, Issue 26 ‘a plethora of trash’) material went far beyond those limits. Far, far, beyond. (Note to self: Insert boilerplate rant on how ‘old school D&D’ was not all ‘kobolds and copper pieces’ in ‘fantasy fucking Vietnam’, as some Old School Revisionists like to claim, but was, in actual play, based on my Lived Experiences, a cosmic (and sometimes, comic (in both the ‘funny’ and ‘superhero’ senses of the word)) phantasmagoria full of galactic dragons and wacky robots.) 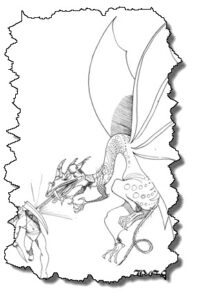 Conjuration Spell This spell allows the caster to conjure “any of the monsters in this book”, and by “any”, they mean “one of the three”. This requires specific ingredients per monster, as noted in their descriptions. For example, the “Astral Eye Beast” requires ingredients 1, 8, 14, 19, and 26 (a.k.a black lotus, a hexagram, medusa blood, pine, and silver). There are 32 ingredients, and the three monsters included do not use anywhere near all of them. Hmm. Come to think of it, the three monsters are the Astral Eye Beast, Bes (Caller of Nightmares), and the Blue Star. Given that short but alphabetical list, I am convinced that there were supposed to be more of them. Some notes on the trio:

“Twice per melee it fires a ‘shooting star’ which hits all ACs as AC 9 and does 1 – 100 points of damage. Any weapon hitting the Blue Star must make a saving throw or be totally melted on the spot. When his total hit points are reached, the Blue Star explodes in a 20′ radius and all living things in the area must make their saving throw at -4 or be burnt into nothingness.”

Cure Any Blindness This will cure “any blindness” (uncertain if it cures ‘blindness due to eyeballs exploding per astral eye beast, see above) but takes much longer to cast than the standard third level cleric spell, which may or may not have been known to the authors. (It was in the PHB, published about a year earlier, but given publication lead times and the fact this book was almost surely a compilation of house rules forged over the prior years, it is quite likely it was not a part of the spell balance discussion, which never happened anyway.) Even if the newly official spell was unknown, it seems odd they’d fill that hole with a 9th level spell, when ‘Raise Dead’ was only fifth level! It’s possible that inflicting blindness, in the absence of an explicit cure pre-PHB, was considered a powerful effect, and so, merited an equally powerful counter-measure. (Note: When I started writing this bit, I’d thought Cure Blindness dated back to OD&D, or at least to Greyhawk. But I checked my copies, and, nope, it was an AD&D addition. As I began play in an era when the original MM and PHB had just been published, but the DMG had not been, my earliest game memories were of a hodge-podge of rules from Holmes Basic, the PHB, and the three original supplements, but not the OD&D “core” rules, which I didn’t see until much later.)

Mass Conversion To my great disappointment, this spell does not provide an empirical example of E=MC^2, but instead merely converts a crowd to the caster’s alignment. (It’s an upgrade to a lower-level ‘Conversion’ spell I didn’t comment on.) To anyone who may be thinking “A spell that converts matter to energy would hardly fit with the assumed early medieval milieu of traditional fantasy RPGs!”: You haven’t read a thing I’ve ever written about real old school gaming, have you? Anti-matter was everywhere back then!

Temporary Monster Raise Resurrects a dead non-humanoid monster, which will serve the caster for one turn, +1 over level needed for use. It doesn’t specify if the raised monster retains its assorted abilities. It’s referred to as a zombie (implying, no) but “zombie” is in “quotes” and describes how it will serve (with absolute loyalty), implying “yes”. I’m sure that the reasonable people who played D&D in the 1970s could reasonably agree to a reasonable interpretation and absolutely no D20s were ever hurled in unreasonable rage.

Now we get to the good stuff! Possibly. As noted, sometimes the spell balance is a little off, and by ‘off’, I mean, ‘bordering on non-existent’.

Airless Vacuum As opposed to, I suppose, the air-filled kind of vacuum? This lasts one round per caster level, and creates a cubic region of (guess!), where those within must save or “have their lungs sucked out”. Those who make the save will suffocate in 1-10 rounds, or 1-5 if surprised. OK, two problems here. First, we get another case of “Does the monster need to breathe? Does it even have lungs?” Second, yet more noteworthy, the spell says “the area cannot be left or entered by anything“. (Emphasis added.) This makes it an extremely powerful force field, lungs or no, without any exceptions, level limits, or saves. I’m also inclined to believe “anything” includes breath weapons, spells, arrow, and so on — otherwise, they’d have said anyone, right? See above re:reasonable reasonableness reasoning reasonably.

(On reviewing for edit, this gets weirder. It will last at least 20 rounds (minimum caster level), during which, nothing can enter or leave. Thus, even those who save, and then roll the maximum duration (10 rounds) until suffocation will still die long before the spell expires. How many rounds they have left hardly matters, as they can’t exit, nor can they affect anything outside the area. Only creatures with no need to breathe will survive, and they’ll be completely unaffected – as they can’t be harmed by incoming effects. They may even have a chance to buff, if they can do so without needing to speak to cast spells or activate items. (Hmm. Items. Potions will boil off when uncorked.) Also, even those who don’t breathe must still retain an internal body pressure of some sort, unless they’re homogeneous, like skeletons, most golems, or elementals. Elementals. Hm. This should insta-kill fire, air, and water elementals. No, hang on, wouldn’t the air elemental disperse and provide some level of non-vacuum, based on its size vs. the size of the area affected? Ah well, reasonably reasonable people will reason it out, I guess. Remember, no amount of rules can make bad players good, so, ipso facto e pluribus pro se ad hoc1, no lack of rules can make good players bad! It’s only reasonable!)

Binding Monster Raise A lot like Temporary Monster Raise, except without the ‘temporary’ and any reference to ‘zombie’. Just killed a Type VI Demon (Balor)? Cast spell. You now have a 100% loyal major demon servant, at least until it dies again. Now, finally, we’re in Lollipop Guild2 territory, and we’re just getting started! ( Abyss, never mind the Type VI Demon. Just use it to restore the thing you summoned with conjuration spell, and you don’t need to find another virgin to sacrifice to call it again!

Set’s Boundary Of Evil Supreme That’s not cruelty to the common apostrophe, it’s correct in this context. The spell is indeed “Set’s”, as in “belonging to the god Set”. It creates some shadowy walls which may or may not (caster’s choice) have a flaming cobra3 in each 10 foot section. Evil people ignore them, neutrals take 1-100% of their HP in damage, and goods are disintegrated unless they save. If the cobra is “used” by someone passing through the wall, whoever touches it takes 2-12 more points of damage (kind of gilding the lily here), and must save or have their soul sent to Set. Not sure why a caster wouldn’t include the cobra, but also not sure how dumb someone passing through or near the shadowy wall of ultimate eeeevil would need to be to mess with them.

Temporary Binding Raise Of The Dead Much as Temporary Monster Raise, but for humanoids. It is much more typical for “verb monster” spells to be higher level than verb humanoid spells — I ranted about this in one of the prior articles in this series. It’s possible this was done to prevent controlling high-level casters (back then, very few monsters could cast spells, and they generally were lower level than those a humanoid caster of the same HD would use). It might also have been to keep someone from turning one of their fellow PC’s remains into a corpse puppet, leading to inter-group conflict that could leave the table4, or leave someone under the remains of the table.

Balls of Destruction Heh heh. Balls. Creates a 1″ sphere containing any spell of 11th level or less that the caster can cast (unclear if this means ‘has memorized’ or ‘is in spellbook’ or ‘is on their list of potential spells, even if they don’t have it in their spellbook’5). The sphere remains until the caster decides to set it off. Given even short downtime, they could prepare dozens of such items, storing them in some sort of sack.

Final Touch Target must save or have their molecules scattered over a 60′ area. Not a 55′ area. Nor a 65′ area. Exactly, and precisely, 60 feet. This is very important to remember. Please note that in combination w/the prior spell, you can destroy an enemy with your balls. Heh heh. Balls.

Magical Mutilation This spell allows you to mutilate a target as desired, such as ripping off their… ears. Anyone the victim touches also suffers the same mutilation, but I don’t think they also gain the ‘pass it on’ power. Duration is “as an ultra permanent”, whatever that means. This could be cool for a 3rd or maybe a 4th level spell, but other than the duration and the ‘infection’, it seems notably weak compared to other spells of this level. When you can disintegrate someone and scatter them over a 60 foot area, merely tearing off their… toes… seems kind of ‘meh’.

Set’s Scimitar Does not conjure a scimitar of any sort! Boo! It merely causes the victim to lose all their levels, statistics, and age. So does that kill them? Reduce all stats to 3 and make them an infant? It’s confusing. Only a wish can restore them.

Another Day, Another Ending

Three more levels down, four to go. I should probably get to the rest next time, ending this by Part VI, unless I get very wordy, very lazy, or both.
“Get?”
“Well, more so.”

1 trans. “I don’t speak Latin”.
2 “We wish to welcome you to Munchkin Land.”
3 Cobras are badass. Ask Johnny Lawrence.
4 This happened in Knights of the Dinner Table, because of course it did.
5 I’d go with the middle option.