I’m Gonna Be Really Reaching When This Gets To Parts V And Later, Huh?

And So We Continue

I Swear I Did Part III Just last Week, But It Was Two Weeks Ago. Well, Bi-Weekly Is Still Frequent For Me

Welcome, imaginary readers, to the fourth part of my review/walkthrough/random digressions on “The Spellcaster’s Bible”, published in 1979 by The Playing Board. You can get any further background you might wish from Part I, Part II, or Part III, but don’t worry if you don’t read them first, I’ll probably repeat some random bits here and there anyway.

So Much Not What I Hoped

Armor Rather than granting a bonus to the caster’s AC, this grants a flat AC of 2+2. No, that’s not ‘4’. Nor is it 0 (exactly), which is what an Old School Gamer might intuit… and if you don’t understand how two plus two could equal zero, get offa my cyberlawn, ya damn punk kids. Rather, it hearkens to the Arduin system, where AC never went into negatives… precisely… but after 2 went 2+1, 2+2, up to maximum of 2+7. The reasons for this are arcane and poorly understood, especially by me. I think it has something to do with weapon type vs. AC.Automatic Weapons This spell, sadly, does not summon a Thompson submachine gun. It summons one magical bolt per caster level, which are +2 and do 2-12 “thump” damage to each target. You still have to roll to hit, too. (OK, so at the minimum caster level, that’s 11 bolts, which is pretty nice, but even with a +2, following the rules of the era, you’d need a 14 (12 w/the +2) to hit AC 0, vs. a fighter’s 10 (and they probably had +2 or better weapons).  So, 45% of the bolts would hit, for 7 average damage each, lessee, that’s 34 points. Not too shabby, but a fireball would do almost the same damage, and the spell point system of Spellcaster’s Bible means you could cast a lot more of them. On the other hand, this does have the advantage of not engulfing allies in the area of effect.

Cardiac Arrest Your basic “save or die” spell. Failing the save puts the target in pain for one round, unable to act. Arguments over whether demons, slimes, or golems have hearts incoming. (Flesh golem, yes; all others, no.) Unlike equivalent “official” spells, this has no hit dice limit.

Controlled Radius Spell Another proto-metamagic spell, this works like the “Super Spell Radius” discussed in Part III, but lets the caster set the radius from 5 to 80 feet. Now, that’s useful, while still involving some tactical decisions, as compared to being able to exclude specific targets from within the radius. 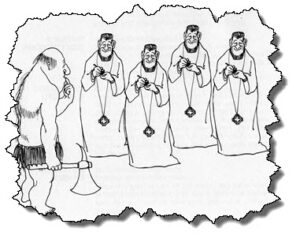 “Screw it, I’ll just fireball them.”

Ged’s Gale Teleports you from black and white to color. No, wait, that’s Dorothy’s Gale. This blows all creatures (regardless of weight/size?) in the area 1-100 miles(!) away, unless they make their save, in which case, it’s 1-100 feet. They take damage if they hit ‘a solid object’, but that seems to be sort of arbitrary unless you’re casting it indoors. Barring a use in Kansas (for example), there’s almost certain something within the range of the caster at ground level they’ll hit, probably much, much closer than the rolled knockback range. So on a practical level, this is ‘smash people into a tree 20 feet away’, with damage determined by whatever means the GM feels is ‘fair’. (I’d have the ‘wind’ blow victims up to arc over most obstacles and land them safely or with minor damage, as that seems more like what the spell was intended to do.

Reflection A sixth level version of a standard second level Mirror Image spell, which doesn’t add enough functionality to justify the level increase. It creates 2-12 images of the caster which don’t vanish when struck, and if the caster is struck, they don’t show signs of damage. The inability to ‘clear out’ the phony images would make this an amazingly frustrating spell to use against players.

Anti-Surprise Spell, The Winner of the “Whizzy the Wizard Uncreative Spell Name Award”, this spell paints all in the area with a pallor of dull ennui normally only experienced by the super-rich, so that anything that happens to them is met with a dull yawn and a bored “I expected that.” This explicitly includes enemies as well as allies, so it’s a good way to screw over the party thief, Stabby McBackstabber, just as they’ve finally gotten into position. That’ll teach the bastard to pickpocket the Magic-User!

Area of Hell This spell simply returns the answer “nine infinite levels”, which is weirdly useless. OK, fine. It creates a 5′ square (plus 5′ for each level of the caster over the minimum) with the environment of “a random plane of Hell”. As this was well before there were ‘official’ descriptions of the specific planes (they came in Dragon a bit later), exactly what that meant was up to the game master. It is possible it referred to the Arduin planes of Hell. Anyway, it would generally be Bad for any creature in the area, and as there is also a 1-in-6 chance, per square, for an appropriate demon to show up. and atta-… wait. Demons are from the Abyss. Devils are from Hell! Boy, I hope someone got fired for that blunder! (Yes, I know, everything was a ‘demon’ until the Monster Manual added devils and the planar cosmology was locked down more firmly, and that these booklets were mostly pre-AD&D in origin, if not necessarily print date. That’s the joke.)

Collision Induced I think this should be “Collision, Induced” or “Induced Collision”.  It affects one target plus one for each level over the minimum required for use, and as it slams the targets into each other, it is seemingly useless if you’re at the minimum caster level — you can’t slam someone into themselves, unless you’re in the Doctor Strange movie. The speed is also based on “levels over minimum”, to the tune of 10MPH per, and damage is number of targets x MPH/10 in d6, to each, save for half. (So a caster three levels over the minimum can slam 4 targets into each other for 4d6 damage apiece, which really isn’t much for a seventh level spell, but it sure would be funny to see.)

Flamboyant Teleportation Teleportation (except through lead!) with no failure chance, and you disappear in a puff of smoke. Whee. Gamma Teleportation, as discussed in Part III, removes the lead restriction but has a “10% crock factor”. I’m not sure the puff of smoke and lead penetration is worth two more spell levels. Maybe one. But only if you can also make the smoke any color you want. And add some sparkler effects. And an assistant to gesture at where you used to be.

Conjuration of the Wind Beasts Conjures one (1) wind beast. Not beasts. Beast, singular. (Basically, an air elemental thingy.) This spell is also known as “The Deceptive Advertising Spell”.

The Last Word Not “Last Word, The”, despite how “Anti-Surprise Spell, The” did it. A round after the caster dies, they may cast one spell, with nothing indicating it needed to be selected while pre-deceased. It has an “until used” duration, which, combined with the ability to choose the spell post-demise, makes it quite useful. Fall off a ladder? Cast a ‘message’ type spell to your friend the cleric. Die in battle? Teleport your corpse to your favorite temple, where they know what to do with it. If you’ve reached the point where you are casting 8th level spells, trust me, there’s a revolving door on the afterlife and you’ll be back on your feet in no time.

Radioactive Mutation Hey, another chance to plug Earth Delta! But, sadly, this does not grant you cool mutant powers, nor does it turn you into a superhero, but merely makes you sterile, withers your limbs, causes your skin to fall off in bleeding clumps, etc. On a save, you’re sterile for 1-3 years, which for a lot of adventurers, is a blessing, not a curse. My halfling swashbuckler got forced into a ‘crossbow wedding’ due to a dalliance with a milkmaid.

Wall of Fire and Ice This spell is still being written, but I’m told it will be done “soon”, even though the spell creator is much more interested in writing up the history of how they came up with this spell than they are in writing the damn spell.

Hey, three levels this time! As the book goes to fifteen, I figured I had to pick up the pace. Be here… eventually… for the next part. Unless I go back to my unfinished GI Joe walkthrough. Or do more Earth Delta. Or otherwise get distracted. Because, that’s what I do — not finish things. Unlike a certain author, though, I don’t get paid a lot to not finish things.