Air Sharks and Doomguards, and Hell Stars, Oh My!

As we finally drift towards the end of the first book, we go out on a high note, probably F sharp. (Is that a high note? I don’t actually know anything about music, so my pun might fall flat. Get it? Flat? Sigh. Enjoy the veal, and don’t forget to tip your waiter.)

But seriously, folks: Monsters. Three pages of them, for 16 in all. Yes, you could fit 16 monsters onto three (half size) pages back then, because we didn’t need a lot of ‘background’ or ‘details’, we had imagination! Also, very small type.

Key points on the general layout:

Here’s others of interest:

We now have a page of rules about demons, numbered with roman numerals, because why not, and with many underlines to show emphasis.

Here’s a Rock Demon vs. a Storm Demon. You’re welcome. 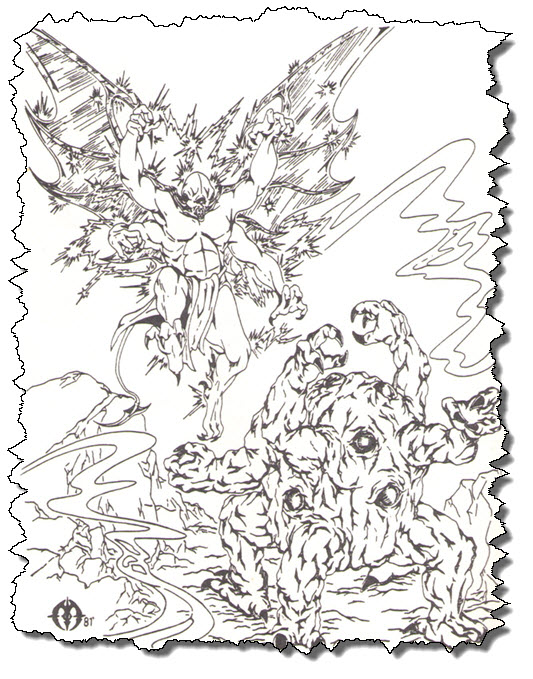 It May Be Possible To Create A More Awesome Image Than This, But I Doubt It

The Planes Of Hell

Not To Be Confused With The Plains Of Hell, Which Are Called “Nebraska”

Seriously, Have You Ever Driven Through Nebraska?

Now we have a listing of Planes of Hell, which feature the usual medieval imagery like tidally-locked worlds with superheated argon atmospheres, or dying suns and pools of liquid mercury, or radioactive vacuum worlds dotted with h-bomb craters, or…

The “21 planes of Hell” in the Arduin-verse are, it seems, hellish sci-fi worlds, which is really cool (even if most of them just kill you instantly) but totally way out in… it’s not even left field, it’s out of the ballpark, down the street, and eating pizza at a hole in the wall pizzeria. Other than the fact the inhabitants are listed as various sorts of demons (which might as well be mutants or aliens, really), there’s virtually no connection between any conception of “hell” I’ve ever heard of. I mean, did Dante ever cover a planet “burned with energy weapons in an interstellar war”?

The 21st level of hell, home to the greater demons (which are noted as mutations, BTW) is filled with bombed-out cities and “dark red mutated seas”, also, kaleidoscope skies and an evilly blue glowing moon.

We now get an assortment of “lesser” demons. I’m just going to include one typical example. I shudder to imagine what “greater” demon stats might have looked like; I’m not 100% sure, but I don’t think they were ever included in the other books.

I also like how it can leap 33′ in a round… again, a number perfectly suited to no mapping system ever used.

Dave ends by saying “The overland and dungeon maps on the next two pages are provided for your interest and enjoyment”, which is nice… but there’s only a dungeon map. As I commented regarding a similar omission in the Princecon III handbook, it’s hard to find a more perfectly zen summary of the essence of old-school supplements. How many days of game time does it take to cross a missing map, grasshopper?

We delve into “Welcome to Skull Tower”. A lot of people have covered/reviewed/dissected the Arduin Grimoire, but far less attention has been paid to the later volumes of the trilogy. This should be fun…