Our Prismatic Walls Go Up To Lavender

Now, we get to one of my very favorite pages in gaming history, possibly second only to the picture of Loviatar in the original Deities and Demigods. (GIS it. Sure, it doesn’t look like much now, but trust me, in the days before the Internet, we adolescent boys had a lot fewer options.)

However, the page I’m discussing has no nipples. What it does have is prismatic walls.

As you might have noticed, Mr. Hargraves had a mad genius for taking existing chunks of Dunother gaming systemons rules and expanding them dramatically. So it was with the prismatic walls. 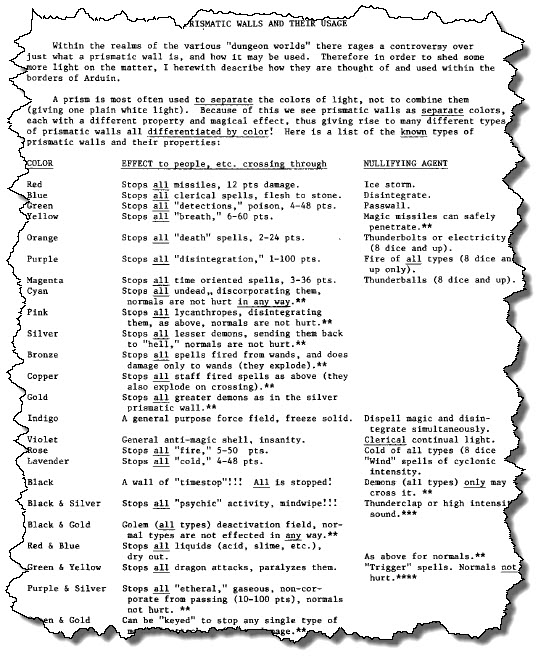 Way back in 1980 or so, I was inspired by this chart to create “Spectral Slimes”, a bunch of oozes, each the color of a wall, with powers/abilities influences by those walls. And I am not one to let an idea go to waste, no matter how much time has passed!

Some of the notations include:

“Prismatic walls, when looked upon, have all the capability to hurt, etc., as outlined in other available gaming systems.” (Yeah, the editing really is that obvious there.)

“**” indicates the only other way to nullify that type of wall is to have a “Dispell(sic) Magic” of equal or greater level than the mage putting the wall up.

Yeah, I gotta include this next one as an image:

You have to love — well, I love — the sadistic glee dripping from this paragraph. More than that, I love the entire style of this, and most of the rest of the writing — the direct, personal, connection, as if you were sitting there listening to Dave explain things to you. The Arduin books (as did the Gygax-authored D&D books) had a strong narrative voice. They were not mere reference books, nor had they been scrubbed and sanitized by a horde of lawyers and marketroids. They were tomes of lore, handed down from wise (and often cranky) masters to the young apprentices.

Then, apropos of nothing in the prior paragraphs, we get a few notes on life level draining. Summary: Sucks to be you.

Many With New And Unusual Spelling

Now, some new spells. First, “Druidical Magik”. The highlights include:

Marlyn’s Mighty Mystical Mouse Spell: This is a 6th level spell that costs 6.5 mana plus 1.5 per mile traveled or 10 minutes, plus an additional 1.5 for every 45 seconds stuck in traffic, and you better tip the driver 20% if you know what’s good for you.  Anyway, it summons a tiny winged mouse to do the druid’s bidding. It can become invisible and passwall at will, its bite causes the target to fall into a deep sleep, and the druid sees and hears all the mouse does — which given the invisibility/passwall powers it has, makes this an incredibly useful spying spell.

Chastarade’s Spell Of The Stone That Weeps In Silence: (Do you love these spell names as much as I do?) Basically, flesh to stone, except a)it turns you into a boulder, not a statue, and b)you retain full consciousness, so you can “forever regret making a druid mad!”.

The Rosy Mist Of Reason: Save vs. magic or become reasonable and discuss things instead of fighting. I suspect that many a DM of the time wanted to cast this spell on their players.

Stephen Le Strange’s Spell Of The Instant Idleness: Targets who fail their save just sit around watching the clouds go by. I’m including this here mostly due to the name. A PC in Dave’s game, or Dave’s own shout-out to the Master Of The Mystic Arts?

Flames Of Doom: Alternatively, ‘Harbag’s Hellfire’: 1d8 damage per turn… and drains one life level per turn! This is only a fourth level spell, and requires a simultaneous Dispel Magic and Cure Disease to end! Damn, they played rough at Hargrave’s table!

Yorgen’s Falling For Forever Spell: Fail a save and “fall” upwards at 100′ per turn. No indication of duration, so, the “falling for forever” is pretty darn literal.

Sulthor’s Blaze Of Glory: This lets you either cast off every spell you have memorized in one turn (including spending any of your unallocated mana to boost them), or select one memorized spell and then pour all your mana into it. You’ll be unconscious for 1-12 hours, either way. But… smeg… every memorized spell? In one turn? I mean… really… that’s pretty… wow. I’d love to be at a game where that happened. I’d hate to be the guy working out all the details and ramifications, if the caster had more than 3-4 spells left. (One thing I’d say is that he or she couldn’t choose targets well — maybe pick a direction for a fireball spell, but not the exact burst point. Any affect that could be randomized, like a polymorph, would be.)

Stafford’s Star Bridge: Creates a rainbow-hued bridge that can support any weight, and can be keyed to let others “fall through selectively“. The “selectively” is underlined in the original. Apparently, this was a dig at Greg Stafford, whom Hargrave, rumor has it, felt was not being sufficiently “supportive”. Or so I’ve pieced together from fragments of stories. If anyone has a more accurate version, with backing beyond “I know this guy who knows this guy who…”, please, let me know.

Transfer Curse: Or “Not Me, God, Him!” (Yes, that’s from the book, not me being snarky. Dave and I have a similar sense of snark, it seems. I wish I could believe in an afterlife, so I could believe I could meet him.) Anyhoo, this spell lets the cleric designate a proxy, and if the cleric reads a cursed scroll/touches a cursed item/etc., the proxy takes the effect. It’s noted this must be used with no evil intent unless “fallen status be your goal”. I’m sort of at a loss as to how transferring a curse to someone else — and curses back in Ye Olden Dayse were nasty — is not a priori evil. Maybe you get the party’s tough guy to agree to be your patsy of his own free will?

Gathering The Sheaves: Brings together all the parts of someone’s body, including those “down to molecular size” but not those “vaporized”, leaving me to wonder how you “vaporize” something without leaving the molecules behind, but, anyway… If you don’t see how damnably useful this spell could be, you do not play real Old School style! (“But Lizard, didn’t you say at the start of this interminable series that telling people there’s a wrong way to be Old School isn’t Old School?” “Yes, I did. I also said I was hypocritical about it, remember?” “Oh, yeah.”) (I have got to get a smarter imaginary peanut gallery.)

Rhyton’s Release: This is a “trigger” spell that causes all college students in the area to write tearful, badly-spelled posts to Tumblr1.No, wait. It “triggers” all magic items in the area (60′ radius+10′ level over that needed to cast the spell), causing them to fire off at least one charge and then discuss their microaggressions. (I made part of that up. Guess which part.) Well, damn. When I think about the kind of magic-item toting characters we used to run back when Arduin was cutting edge instead of nostalgic, I’m glad no one tried casting this. Well, at least now I know what a “save vs. triggers” probably is. (And knowing is half the battle! The other half is finding a safe space where you can recover from your trauma at hearing someone express an idea you don’t agree with.2) The “at least one” is interesting… no rules for determining if it’s more than one charge, but that never stopped a properly sadistic DM, and there’s no other kind worth playing under!

1: Never let it be said I won’t beat a joke into the ground, then keep pounding until it hits the Earth’s molten core. (“Trust me, Lizard, no one has ever said that.”)