Continued from what, you may ask.

From the next page, of course. The ordinary laws of time, space, and page order mean nothing here! Nothing, do you hear me? Nothing!

Anyway… Rune Weaver Spells, or “Webs Of Power”, which is an admittedly awesome term. 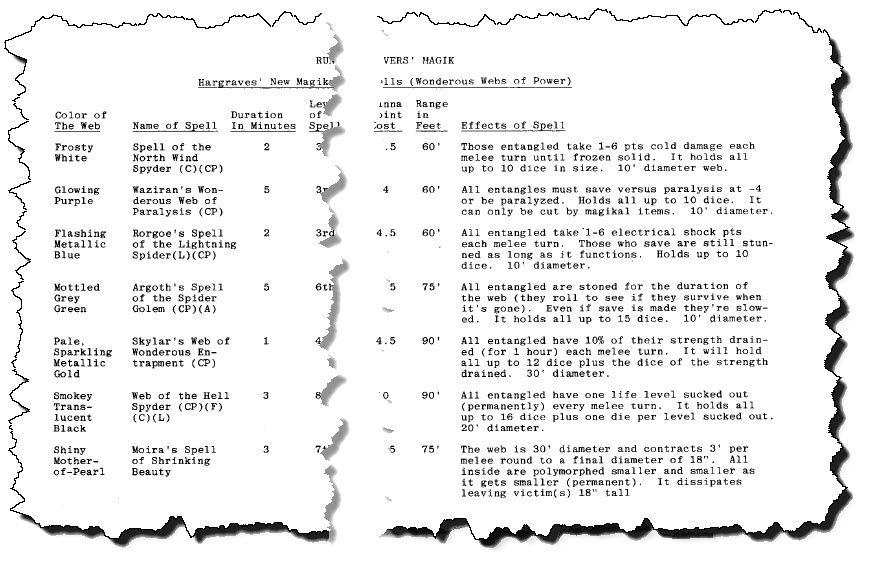 So, this is the first page, which is after the second page… but anyway…

Yeah, This Really IS Awesome. No Sarcasm. Seriously.

This is what RPG spells should sound like! The names are evocative and informative! You have at least a clue what each one does… North Wind? Sounds cold, right? Paralysis? Well, that’s obvious. Etc. Let’s compare, in order to keep (TRIGGER WARNING: ANIMAL CRUELTY1) beating dead horses, “Golden Wyvern Adept”. This was the proposed name for a feat that let a wizard exclude some targets from an AOE spell in Dungeons & Dragons Fourth Edition. It was mocked to death, rightly so. Style and flavor are important… but not to the point where they’re meaningless. Arduin, mostly, hit the sweet spot.

And the colors! Dude, look at the colors! Mottled grey-green, sparkling metallic gold, and (on the first page, which is really the second page), “As For Green Slime”. Erm, OK, that one’s not so hot. I mean… green? Or “translucent drippy slimy green”? But there’s also “Whistling Glowing Blue Web On Fire The Blue Flames”, and I don’t care that, technically, “whistling” isn’t a color. It is if Dave Hargrave says it is, damn it!

That’s “the spell of the web that eats men”, which conjures a 10′ web of green slime. It holds “all up to 10 dice” and “attacks at 1 die per turn, then 2, then 4, etc.”, and in the face of such coolness, it would be churlish of me to whine that it doesn’t actually say what size die.. I’m guessing either “D6” or “Whatever die green slime use”. (Not ‘dye’, please note. Green Slime only rarely color themselves black to try to pass for Black Pudding.)

Now, the important stuff: The phat l3wt, though of course, we didn’t call it that back then. You couldn’t have your Monty Haul games without tons of magic.. er… magik… and here’s some new stuff.

Other than the obvious pun… well, obvious if you’ve lived in the Bay Area and used its laughably misnamed Rapid Transit System (OTOH, if you were living in Joisey at the time, you totally didn’t get it)… I posted this mostly to show the format. Value, looks, effect. “Looks” was generally not standard for the time. Greyhawk, for instance, added many of the most iconic items to D&D, but described them almost entirely mechanically. Likewise, the “Value” of magic items, from what I can tell, didn’t become standard until the DMG came out around 1979 or so. Neither Greyhawk nor my LBBs list prices for magic items, at least not in a clear and obvious place — which, I must admit, is no proof they’re not in there, given the nature of the era. (“Well, of course the price tables for magic items are in between ‘Table II-A: Swamp Parasites’ and ‘Table II-B: Sausage Prices’. Where else would they be?”)

A few of the niftier items:

And here’s a picture of a boogie man. This is not from the edition of Arduin I’ve been mostly referencing here, but from the edition I’ve had since I was in High School. Why? Because, even though it pains me to say this, the art from Erol Otus in a lot of that early printing wasn’t that great, compared to his later genius. It might have just been poor reproduction, or something. But this guy? Michio? He was freakin’ amazing, even given the limited printing capacity of the time. Oh, but why a picture of a boogie man? Because that’s what’s at the end of the Magik Items section, of course. Duh. 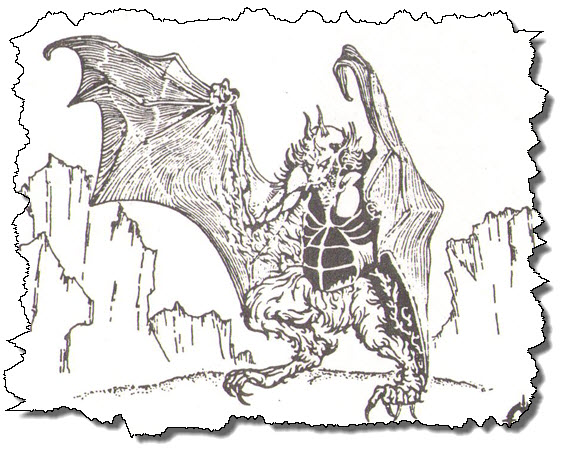 Oddly, He Is Not Wearing Tight Jeans, Nor Does He Have A Coke Spoon. Boogie Man, Get It? Thanks. Don’t Forget To Tip Your Waiter.

And with that, we’re officially at the halfway point in the book! Tune in next time, for Alignment! Also, Combat, and maybe we’ll make it to the Dinosaur Chart.