Alignment, Combat, And Combat About Alignment

There was an “alignment chart” earlier in the book, but now we have an essay about it. It’s very clearly based on the original tripartite scheme, and how often do you get to use ‘tripartite’ in a sentence, anyway? Mr. Hargrave believes the predominance of ‘lawful’ types in games is due to the dunother game systemons treasure distribution rules, where most aligned magic items were lawful. (And he may well have a point, as gamers will exploit any rule that gives them even the smallest advantage, in deference to all other considerations… there was a prolonged Knights Of The Dinner Table strip where the characters concocted an extreme plot to become enslaved by an evil race, win their respect, and be anointed (not, as my spell checker suggests, annotated) members of that race, so they could then pick the race’s god as their patron deity… because they’d get 1d6 extra hit points for worshiping him. That this would take years of game time did not deter them from trying it. Satire, of course, but like all good satire, somewhat grounded in truth… I’ve seen people on MMO boards complaining that they “had” to complete some long, tedious, series of quests, because the reward was a +1% bonus to something-or-other, and they were “forced” to do them because otherwise, why, they wouldn’t have the 1% bonus! But I digress.)

However, I must suspect that a bigger reason for the predominance of “lawful” characters is revealed by Dave Hargrave’s paean to the joys of chaotics:

A party of fishmalks didn’t work even two decades before anyone even knew what a fishmalk was.

We next learn the following about combat in Arduin, over several pages of teeny-tiny type, in no particular order… just Dave’s jotted notes, sometimes brilliant, sometimes mind-boggling, always entertaining, one after the other. Like I keep saying, reading this is like having Dave in your living room, guzzling your Mountain Dew and nomming your Cheetohs, while he tells you what he thinks and how to play his kind of game.

In general, all the rules in this section make it clear play was with “paper and pencil and miniature figures”. I got your “theater of the mind” right here, buddy. As the dead horse beatathon continues, it’s really fascinating to see this slice of history from smack-dab right in the middle of the transition from “D&D as a new wargame” to “D&D as the first of a new genre”. To keep up with my evolutionary analogies, let’s call it the Archeopteryx Moment of the culture… the point where something is mid-range between two things. This is where “RPG Culture” really began to distinguish itself from “Wargame Culture”, where you started getting more and more players who didn’t have a wargaming background at all, but came in from SF, fantasy, and comic fandom.

Now, we head into more specific, detailed, combat rules. I’m just going to include a few snippets that are typical of the level of detail. These help show that, at the time, the response from most of D&D’s audience to its simple, abstract, system (which was derived from wargame-style CRTs (Combat Result Tables, not Cathode Ray Tubes, ya idjit!) was not “This is a gem of pure perfection, needing no further details, that frees our imagination to soar on wings of fancy to realms of pure storytelling bliss”, but was, rather, “M0AR R00LZ NA0W!!!!”, except, better spelled, because back then, you couldn’t get away with  being an illiterate moron as easily as you can today.

But What If Two Of Them Are Halflings And Is An Ogre?

Too Simplistic. I Want Modifiers For Bucklers, Round Shields, Kite Shields, and Different Kinds Of Shield Material. OK, That’s Pathfinder. But I Digress.

Hargrave Invented The Six-Second Round AND The Armor Check Penalty 23 Years Before D&D 3.0!

Oh, I Think The Turkey will Get The Message The First Time

(You’ll note, BTW, there’s none of this namby-pamby molly-coddling of idiots who do idiotic things. They’re called out for being idiots. Back then, it was understood the only way to get someone to stop being stupid was to tell them that they were being stupid.)

And here’s a Stalking Vroat (from the later edition): 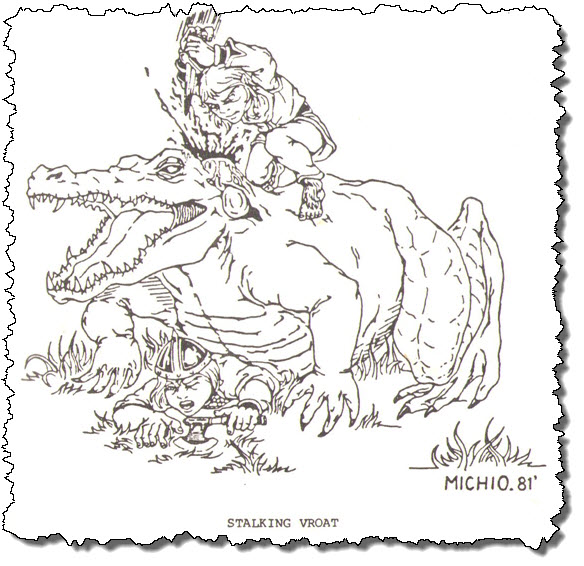 Damn, I love this guy’s art.

Anyway, there’s five more pages of combat tables, weapon vs. AC modifiers, hex facing rules, and so on. I think I’ve covered the style and tone well enough for now. They mostly replicate, with minor changes, “that other game system”.

Ah, but then… but then…
The critical charts!
And I just found out to get this damn editor to not insert huge white spaces between paragraphs. Cool.

While not as hilariously gory and sarcastic as the Rolemaster charts… no tripping over imaginary turtles… this did add an element of blood-soaked fun to the mundane massacres of monsters. In one game we played, a halfling rolled a “100” critical on a centaur. I ruled the halfling had actually stabbed the centaur in the foot, but the creature reared up and smashed his head on the ceiling. So it goes. 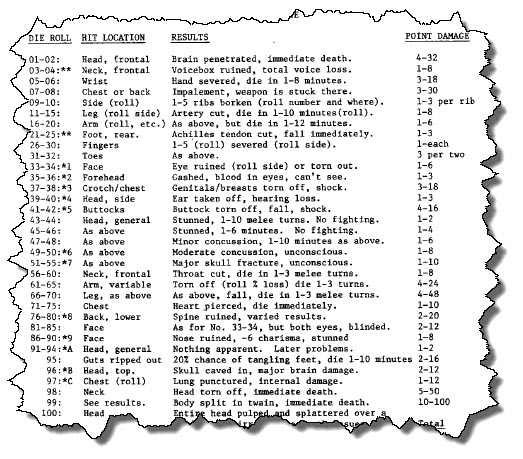 One Point Per Finger. Something About That Really Appeals To Me

For a roll of 100, it says, “irrevocable death results”. This seems a bit odd in the context of the time, when everyone was walking around with wishing rings, and there was even a spell in this very book, “Gathering the Sheaves“, which would bring together all the parts of the body for a quick raise dead. It’s telling, though, that even at this early stage of the game’s evolution, the “revolving door afterlife” was starting to irk people. 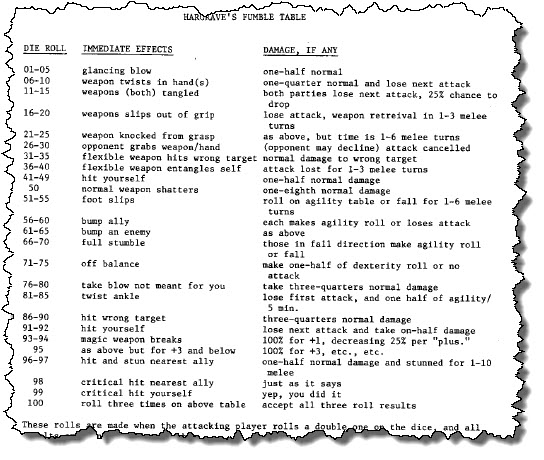 Criticaling Yourself Was Rare, But You Never Forgot It When It Happened

I am not sure what’s meant by “rolls a double one on the dice” — does that mean, rolls a 1, then, rolls again, and if it’s a 1, it’s a critical fumble? There are no actual rules I can find in the Grimoire for when something’s a critical hit, either… we just assumed a roll of ’20’ meant a critical when we played.

Next, we have a “Brawl chart”, that looks like it would work better for unarmed combat than the AD&D DMG rules (not that much would work worse, come to think of it), where you have a cross-index of attacks like “Right Cross” and “Uppercut” against defenses like “Duck Right” and “Jump Back”, and each participant in the brawl wrote down, secretly, their attack and defense, and then various formulas involving strength and dexterity were applied to see who hit first and what the odds were, and so on. It’s basically a separate combat module. I’ve seen a few games, even relatively modern ones, decide that a one-size-fits-all combat system doesn’t work for all the different ways people can kill each other, and so, have a ‘gunfighting’ system and a ‘fencing’ system and so on, which is one of those “looks good until you try it in actual play” ideas — because someone’s going to try to punch the armed orc, or shoot the brawler, and then integrating the mechanics on the fly becomes a mad dash of hastily improvised rules based on whatever points are in common. (Hell, a very similar problem occurred with White Wolf’s OWOD games, where the various magic and special ability rules were relatively well-balanced and tested within each splatbook, but the interactions between them became insanely complex when you tried to mix-and-match.)

You almost never saw this level of detail for melee fighting, though. Combat systems for D&D (and its close evolutionary kin) where you picked a specific attack and a specific defense were not common. I won’t say there were none, because the mad surge of creativity that defined this era produced so much, so fast, that no one, not even an obsessive collector like myself, could hope to see it all, but they weren’t widespread and none seemed to rise to even local prominence.

(I wonder if it would ever be possible to trace back the origins of various aspects of early variant rules. I have a theory (it could be bunnies) that a lot of the “m0ar stuph!” — the new monsters, magic items, classes, spells, etc — came from the sci-fi fandom crowd, drawn into D&D from a non-wargame background, who saw RPGs as their way to have Mr. Spock fight the Balrog, and the “m0ar r00lz!” — the uber-detailed combat modifiers and detailed tactical positioning systems — came from SCAdians and history buffs who wanted a game that simulated their concept of medieval combat on a personal level. (Prior wargames, with their focus on units, abstracted away the “He’s got a round wooden shield and he’s using it left-handed, while he’s holding a war axe with a 2′ handle, and I’ve got a 4′ longsword but no shield, and it’s muddy, and I’m running downhill at him, and I had porridge for breakfast, but he hasn’t eaten yet…” details.)

Well, that’s it for now… next time… were-centipedes and dinosaurs.