Without Which, It’s Not An RPG, It’s Just People Making Up Stories

Also, I Roll Up Three Magic Weapons, Just Because I Can

Now, we proceed to a large collection of charts and tables, things which used to be heavily in vogue (or possibly in Elle) in RPGs. Nowadays, the trend is towards simple formulas, such as “3+1/2 level+your class spellcasting attribute bonus+2/3 of your level in a related class except for an alternate base adjusted optional class, +12% of the total amount you spent on giving the DM Chinese food”, instead of complex charts. Progress!1

Oddly, most of these charts replicate in function, if not form, the same charts in That Game Dave Won’t Mention Anymore. (A careful reading of the rules shows many places where the font is suspiciously different from the surrounding text, indicating something, most likely the name “other roleplaying gam“, has been whited-out and replaced.) They don’t seem to offer a dramatic improvement, they just offer a slightly different take on things, perhaps with a few more options or details.

We start with the Clerical Turn-Away Chart, presenting a set of ‘roll this number or higher’ values cross-indexed with level and undead type. The level ranges go up by two for a bit, then four, then five, then ten, while the target number slowly drops by 1. Turning didn’t happen a lot in Dave’s games, I’m guessing. If you roll double the needed number, you destroy, rather than turn, the undead… but there’s no chance of this happening until a 20th level Cleric tries to turn a measly skeleton… and what’s a skeleton doing facing a 20th level cleric, anyway?

The chart also highlights a more general problem with the original D&D design, one not solved for a while: By using specific undead types, instead of “hit dice” or “level”, you ran into problems with new undead, and the designer always had to remember to add things like “Turned as a wight”. (Hell, this problem of failing to prepare for expansion hits a lot of things… how many different systems in Star Fleet Battles are ‘destroyed on photon torpedo hits’, for example?)

One oddity worth noting is that the number is reduced by 1 if the Cleric is trying his “final try”… I have no idea what that means. Perhaps it will be addressed later. Perhaps monkeys will fly out of my butt.

Next, we have what looks to be a unique mechanic: A chart showing “Detect Ability” by source (such as Mage, Cleric, Amulet, etc.) and target (such as Magic, Treasure, Weather). it’s a way to consolidate all of the various “Detection” abilities in a single universal mechanic — so if you have a Magic User spell that Detects Weather, this chart — not the spell description — is supposed to be used to let you know the odds of it working. 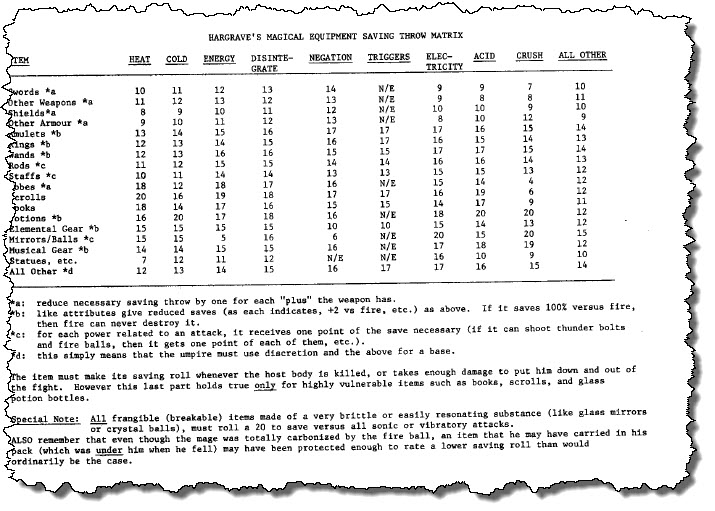 Saving throws for items was one of those rules that tended to only get remembered when the rememberer thought it could be of use. This includes DMs who really regretted letting a player get the +5 Sword Of Hellacious Disemboweling, or players who wanted an ‘out’ when the DM said something like, “No, your +1 leather armor doesn’t protect you against falling 100′ into an active volcano.”

I am utterly at a loss as to what “Triggers” mean. Presumably, the magic item had to save against any exposure to any concept, idea, or word that offended its delicate Millennial sensibilities, or it would go curl up in a fetal ball and whimper about how it was oppressed.

As was also typical of the time, the intensity (level) of the effect was never considered — a wyrmling’s dragon breath and an elder wyrm’s dragon breath were just as likely to boil your potion, and that’s not a euphemism. (Maybe…  I mean, maybe just as likely, not maybe it’s not a euphemism. There were a lot of microrules associated with dragons, so this might be an exception, but I’m too lazy to go look it up right now, and this article is two weeks late as it is. Remember this site’s motto: “Free, and worth it!”. Hm. I might need to change that if I make up a Patreon.) Magic weapons and armor, though, got a bonus for each “plus”.

You’ll note the use of “umpire” instead of “DM”. Little-known fact: The term “Dungeon Master” did not appear in the “little brown books”. I’m not sure when it was first used, but during the earliest years… the Terrenuvian phase of Cambrian-era gaming… there were a lot of terms used, drawn from wargaming, mostly, such as “Referee”, “Judge”, and “Umpire”. “Dungeon Master” and “Game Master” emerged a few years later, and things “Storyteller”, “Gameplay Happiness Facilitator”, and “Directed Probability Consciousness Counselor” weren’t even imagined, thank Cthulhu.

Then there’s a set of charts for normal character saving throws, interesting in only a few respects: 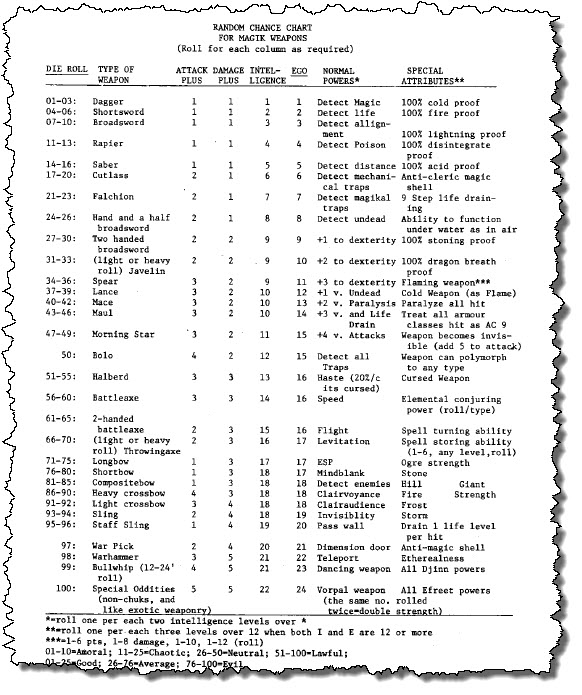 Not sure what “Roll one per each two intelligence levels over *” means, I’m guessing *=8, on the grounds that it’s over the ‘8’ key and that would be an easy typo to make.

(I just opened up my dice bag to discover it contained several packets of soy sauce and duck sauce from a game about three weeks ago. Huh. Anyway….)

37 (Lance), 73 (+1 attack),31 (+2 damage),01 (Int 1), 70 (Ego 17), no special powers. Alignment: 38, 24=Neutral Good. Hm. The Lance Of The Worthy. While possessing no awareness, this lance nonetheless has a powerful, instinctual, desire to be wielded only by those dedicated to a life of good and heroic deeds. It will struggle against anyone not so inclined.

43(Maul),71(+1 attack),90(+3 damage),74 (Int 17),16(Ego 5), 3 Normal powers: 100 (Holy CRAP, it’s a vorpal…. maul?),13 (detect poison),92 (Clairaudience). Alignment: 64, 30=Lawful… Average? Hm. The Crusher Of Heretics. This self-aware, but somewhat pliable, weapon is known for its obsession with small details and points of order, and will lecture its wielder at length about the need for proper decorum in all things. It is especially eager to kill those who hold to religious teachings that deviate from what it considers “proper”, and uses its clairaudience to listen in on the conversations of scholars and priests, hoping to catch them in heresy. The ability to detect poison has saved the life of more than one bearer of this powerful weapon, as such bearers tend to breed enemies. While it cannot actually sever heads, on a roll of 20, it knocks the head clean off, causing it roll 1d10+4 feet.

1:”But Lizard! You whine all the time about how much you hate simplistic, dumbed-down systems and freeform this and abstracted that, so how come you’re whining about rules being too complex? What side are you on?” I’ve already answered this: The side that lets me make the most snide remarks at any given juncture.