I’m Chad. I’ll Be Your Waiter This Evening

Would You Like To Try Our New Unicorn Bites Appetizer?

Welcome To Skull Tower has, as far as I know (which is about as far as a crippled kobbit can throw an ibathene) a much less complex publishing history than the Grimoire. I’ve only ever seen one edition, though there may well have been multiple printings… no alternate covers, etc. (There is a much more recent set of reprints through, I think, Emperor’s Choice, but that’s not the same thing.) The art is mostly by “Morno”, aka Brad Schenk, with “a few late entries by our original artist, Erol Otus”. (I’d still love to hear the details of what kind of falling out led to all of Erol’s art being replaced between editions of the Grimoire…) Morno’s art is… good. It’s not Michio good. Michio is, like, the absolute god of old-school gaming art. Seriously, I’ve got to track down what happened to him/her. But it’s good enough, evocative, clean, and far above the usual art of this era, drawn by This Guy I Know.

Wait, I Already Said That

Erm… Welcome To The First Subsection Of The First Part Of The Walkthrough Of The Second Book In The Arduin Triology!

Hang On, Wouldn’t The Part Above This Be The First Subsection, So This Is Really The Second Subsection? 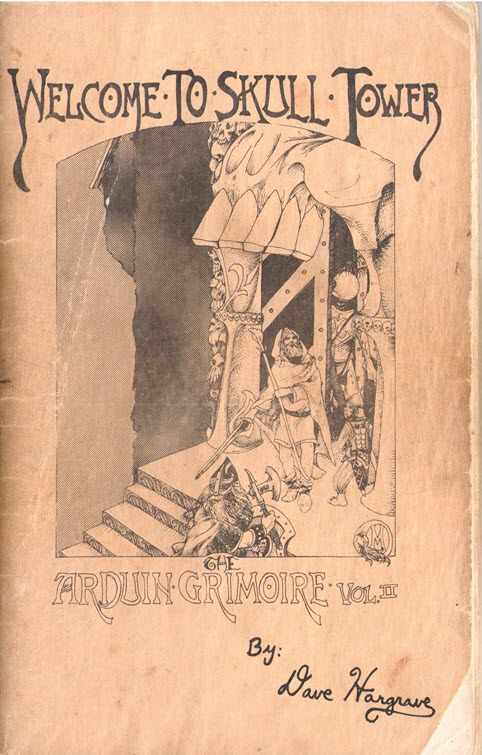 You Just Know The Jaws Are Going To Close On Them, Doing 4-48 Damage, Right?

I totally want someone to do the title lettering as a font. You’d need to curl the really long extended tails on the letters down and under or something, but still, it’s awesome.

As you can see, this book has had a lot of life. I’ve got books about as old in my collection that are in much better shape, because they weren’t being continuously dragged out, referenced, paged through, read while eating chicken strips dripping with duck sauce, etc. My Arduin books are well-used and always have an honored place in my “ready to hand” pile of references, regardless of what game system I was currently working with. They are profoundly inspirational. Some people open the Bible to a random page; I open an Arduin book. This explains why many of my solutions to life’s problems are “Cast ‘Mindan’s Mind Mask’ spell”. 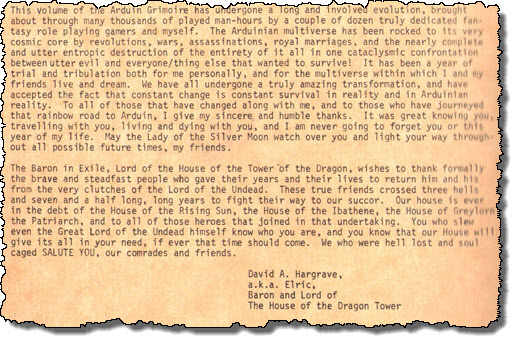 “House Of The Ibathene”… Eat Your Heart Out, House Targaryen!

Rocked to the cosmic core! Entropic destruction! This is what old-school gaming was all about (to me)… glorious over-the-topness, if topness is a word. A seven-and-a-half year (one presumes, in game time, as D&D was barely 4 years old when this was published) quest across three hells (See here for an idea what those hells might have been like…) to rescue the Baron in Exile from the Lord of the Undead! God damn that sounds awesome!

And there was so much more to come…

All Those Monsters And Magic Items Lost In Time, Like Tears In The Rain….

There was indeed a third volume, and more besides, but the total published work never came close to what’s described here. Dave Hargrave died far too soon. In a just world, he would lived to receive the honors bestowed on Gygax, and Arneson, and Bledsoe in the past few years, but we do not live in a just world. If you doubt this, go open a news page. Doesn’t matter when you read this, or what’s happening at the time… I guarantee you, check whatever news there is when you encounter this at some vague future date, and you shall see injustice. But I digress.

We jump right into detailed rules in teeny-tiny type.

In Dave’s world, Constitution granted bonus hit points… but only up to your normal rolled maximum! So if you had a Con of 18 (+4 hit points per level), and you rolled a d6 for hit points, that +4 could bring you up to 6, but not higher than 6! When you combine this with the obvious deadliness of the spells and monsters Dave came up with, I repeat my wonder anyone ever survived past first level.

Then we have this:

We Have An Italic Font And We’re Not Afraid To Use It!

Wait, Oxen Only Have A Strength Of 14?

Hang On, I Need To Go Write A 15 Page Set Of Rules And Stats For Domestic Animals, This Is All Wrong!

Having dealt with Constitution, we move on to Strength. 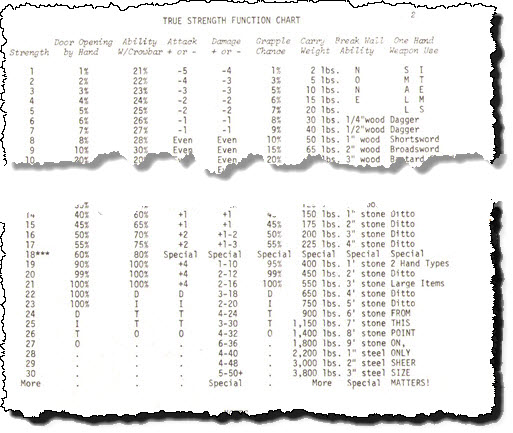 As always, a few observations, which may or may not end up being actually relevant to the text, as anything can send me spiraling off into a long and pointless digression. We’ll see. I have no more idea about where this will end up as I’m writing it than you have reading it, though the fact we’re going there in a handbasket along a road labeled “Good Intentions” does provide a clue.

We’ll continue this sojourn with a type of chart that was fairly common in Ye Olden Dayse, the “female attributes” chart. (Outside of That Game That Must Not Be Named, I do not know of any RPG that included a similar chart for the pertinent anatomical features of male characters.) 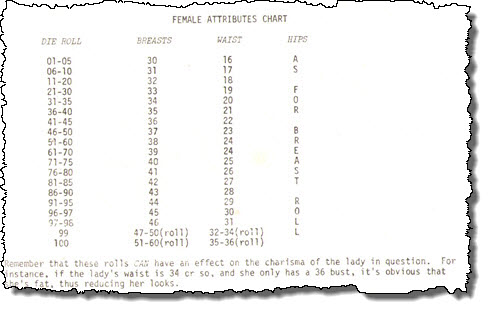 As Is Typical Of Games Of The Era, There Are Detailed Charts And Tables For Wholly Mythical Beings Never Encountered In Real Life

Oddly, given the predilections of the era, there’s no extensive modifiers based on Strength, Constitution, etc., just a flat-out roll, which might then affect Charisma in some undefined way, presumably based on what the DM felt was “hot”. I’m assuming that “As For Breast Roll” means “Roll again”, not “identical top and bottom”.

And Then There’s This…

So, here’s the very next paragraph:

We go from Strength and Constitution, to breast size, to “If you morons don’t understand the combat rules, go read my other book!” It might be tempting to draw a connection between the “How Fat Are You?” chart and the reference to combat rules, but I think it’s just an aspect of the “lay it out as you go along” style of the time… especially when the next page covers Charisma, which fits with the “attribute” theme… so we have Strength, Constitution, Giggity, “Read my other book!”, Charisma. Makes sense to me.

Not That False Charisma You See Elsewhere!

The next chart is labelled “True Charisma”, while the Strength chart, you may have noticed, was labelled “True Strength”. Perhaps this indicates these are the “True” rules, as opposed to the inferior and error-ridden rules found in dunother roleplaying gamesons? 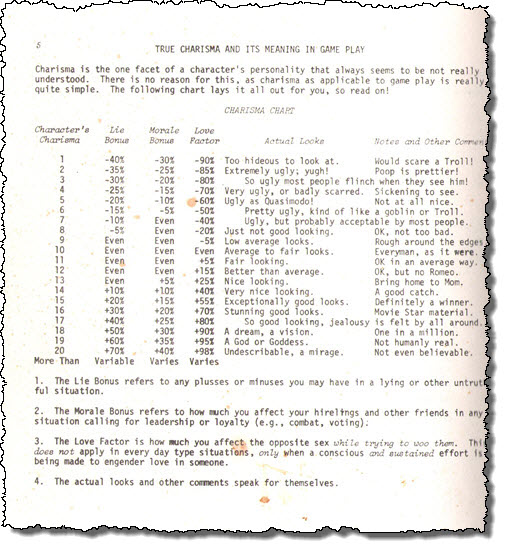 Beauty And Leadership Are The Same Thing. Just Ask Rasputin.

I am guessing the “Lie Bonus” here interacts with the various bonuses to the same presented in The Arduin Grimoire, and it all works out to the flat percentage, without regard to the target’s abilities? To be fair, these kinds of unopposed checks were very common in this era, as it was unusual for monsters to have the full range of abilities that PCs did, making it very difficult to build systems that relied on everyone involved having the same statistics. (One of Runequest’s major innovations was making sure everything had similar stats, so you could easily design rules that worked well when a Duck was trying to con a Scorpion-Man.)

The “tiny bit of fluff text in a column” style of chart becomes more and more common throughout the trilogy; we’ll be encountering it a lot. I like it. It provides that tiny spark of inspiration or explanation which adds color and flavor to dull numbers, without being so expansive as to remove interpretation and personalization.

A Dwarf Fighting A Boogie Man

Probably, they’re doing battle over the +2 Coke Spoon Of Getting Down.

Yeah, I made a similar joke the last time “boogie man” came up.

Since this is the twentieth article in this series, you ought to have come to realize I recycle jokes the way SF hippies recycle soda cans.

(“You toss your jokes onto the sidewalk and wait for a homeless guy to pick them up and turn them in for cash?”
“Mostly, yeah. Why?”
“No reason.”)