Thus it was, that there came the eighteenth segment of the second chronicle of the three tomes, wherein A’pos’tro’phe The Sl’augh’ter’but’cher did battle Vwlss The Bldyfstd[1] on the Fields Of Fauxtolkienia, or, in other words, we reach the section on the history of Arduin, the world and the nation. After we cover some other things.

But First! The Mystery Of Jim(!) Resolved!

Back a few weeks, I noted that Greyhawk included an odd little shout-out in the description of the meteor swarm spell, and wondered what it meant. Well, thanks to Yancy (and the fact I checked my spam folder, where his post was crudely and maliciously exiled for no good reason), we have an answer. Yes, it was Jim Ward, and yes, there was a story behind it, and a damn good one that points, once more, to the very personal and connected nature of those earliest days of gaming. (See my PrinceCon walkthrough for more.)

So, we need a brief digression here (shocking, I know, at least as shocking as my parenthetical asides where I repeat the same ‘I bet you’re shocked there’s a digression’ joke I’ve used a dozen times before… and now my digression from my digression to discuss my digression has digressed. I am Laurence Steme, reborn!) to discuss the early history of RPGs. First, wargames were purely episodic… you set up your miniatures for the Battle of Waterloo, you played through each turn (as described way back in the beginning of this series), you removed your figures from your opponent’s nostrils, and you packed up. Then came larger campaigns, where multiple battles would be fought in a sequence. This then mutated to the idea of specific figures on the battlefield representing individuals, not units, and gaining in power from one scenario to the next. And then came the idea of each player controlling one individual while another player controlled the rest of the world, and at some point, an impossible-to-define line was crossed and we had role playing games. (Important to note: Neither “role playing game” nor “dungeon master” appeared in the “three brown books” version of D&D. ‘struth!)

Where am I going with all this? OK. See, at some point in this evolution, it became understood or implied that the characters, and the world, actually had a kind of existence even when not being actively played. No one wondered, or cared, what their Napoleonic figures might be doing between battles; they didn’t unpack them and then roll on the ‘Consequences Of Being At Liberty’ tables before each fight.  When continuity between games started to matter, when you had acquired loot to sell and could engage in activities like making magic items or researching spells, there needed to be a place to do this, and then something clicked and people realized you could explore a town as you could a dungeon or a wilderness, that it could be a place as well, and then a kind of cognitive dissonance hit, as players noticed that while heedless slaughter and pillage made a kind of sense where no one else was portrayed as an actual person, just as sacks of hit points that bled gold and XP when you stabbed them, but, when put in a context of taverns and brothels (and, eventually, other, less important, buildings), it seemed a bit… odd. So it came to pass that as actual settings and worlds grew out of the primordial fog of wargaming abstraction, there would be codes of law that might be applied to errant PCs, and, eventually, such things began to be used to help define different cultures and nations in a world, continuing the transition from wargaming’s “every battle is unique in itself” to “a single world can hold uncounted adventures, with multiple campaigns occurring in the same, shared, setting”. Sort of how games like Wizardry I evolved, over time, into World of Warcraft.

After all that, we come to this: 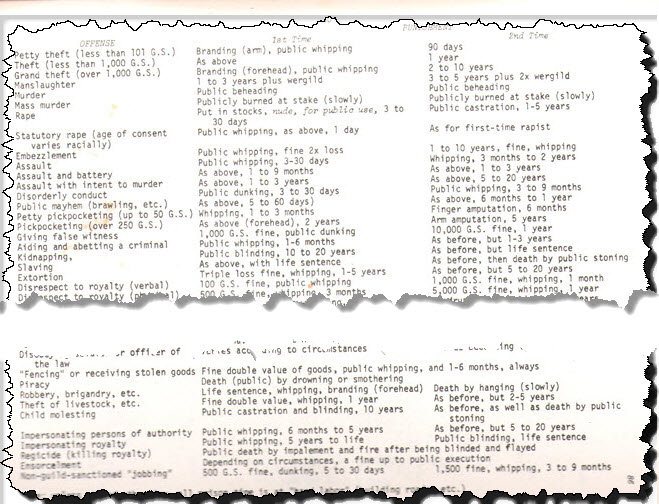 Beheading Someone For Both The First And Second Offense Makes Sense In This Setting, Trust Me

A footnote to the chart notes that all prison time is at hard labor, which is proper… the idea of a prisoner just sitting in his cell, costing money but doing nothing, is a fairly modern invention. Most medieval punishments were harsh and physical because you couldn’t keep someone around for a long period of time; you punished them and then let them go, presumably to either sin no more, or to sin so egregiously you could justify killing them.

(Because History Tends To Be Cycles Of Such, And Because It’s A Hilarious[2] Callback To The Prior Section Heading)

And now, after inns, timekeeping, holidays, guilds, and religious sects… we get to the actual history of Arduin.

We start with this introduction:

So, About A Five Percent Survival Rate…

For context, D&D was published in 1974. Welcome To Skull Tower was published in 1978. That works out to about 120 characters killed per real-world year of actual gameplay. I assume Dave ran games more frequently than the traditional once a week. (He did… see below.)

The history itself is many pages of dense text. I’m loathe to just scan and upload it in full, but I’m also disinclined to type out long excerpts. So I’ll write out a bullet-pointed list of highlights and asides, my usual lazy solution to problems of this nature. (Until it hit the point where the awesome-o-meter just exploded, then I gave in and did some scanning. Some stuff is just too cool to paraphrase or condense. See below.)

(Alternatively, “The War Of Elven Aggression” or “The War Against Human Imperialism”)

No, That’s Not A Typo

The phrase “Twice the iron grey cataphracts of Viruelandia surged up from the south” appears in the text I am about to summarize. If that alone is not justification for the existence of the Arduin trilogy, what could be? Please note, I saved y’all some googling by linking to the definition of ‘cataphract’. I hope you appreciate that.

Mostly ‘Cause My Sunday Shadowrun Game Got Cancelled

Anyway… when last we left our intrepid heroes, about five lines above, the deodanth army had almost conquered Arduin. And then…

This needs a scan, sorry. It’s too awesome to bullet point. 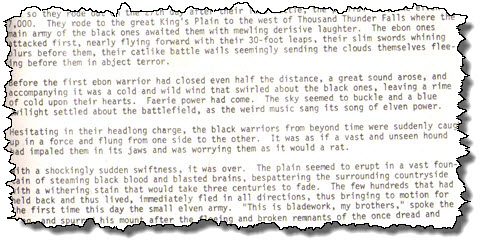 “Bespattered” Is A Perfectly Cromulent Word

“…sending the clouds themselves fleeing before them in abject terror.”
“…as the weird music sang its song of elven power.”
“…a withering stain that would take three centuries to fade.”
“This is bladework, my brothers!” Aw, hell yes! (Imagine a heavy metal power chord right here. BWAAANG!)

See what I mean? When I write histories and backstories and the like for my own settings, unless constrained by editorial fiat (well, given the budgets of most game companies, more like editorial Used 1992 Honda), I write in this style. This is pure purple pulp, perfect for RPGs and alliteration.

“…the road to gods and demons, the trail of tears and danger.” So. Freakin’. Awesome.

“…screamed to the high winds of hell…”

Yeah! This needs to be animated, Heavy Metal style. Seriously. Why hasn’t it been? Get a Kickstarter going, or something.

Well, the Wars Of When went won… went on … for another 10,000 years after that, until the aforementioned Accord of Arduin. And we learn something of the nature of play in those long-lost glory days of gaming…

The Inns And Roadhouses (Again) Of Arduin

So, now that we’ve finished the epic history of the world, stretching back a million years or more, what next?

A list of inns and roadhouses, of course! Only 14 pages past where they were discussed originally. Old school, dude. What can you do?

This table goes on for four full pages. This says a lot about the detail Dave put into his world, or maybe he just liked making up bar names. We will (probably) never know if they were each written up specifically, or if nothing but a name and a rating were ever defined.

There’s a footnote on one page…

Three Out Of Four Alehouses In Arduin Are Alliterative

The list of inns is followed by a small table explaining the attacks of various undead — how much damage they do, and additional effects such as paralysis or drain. And this note:

Another classic example of Dave in his best “All you of Earth are idiots!” mode. Of course the time required is based on the attacking monster’s hit dice level! Note the use of italics to emphasize the obviousness of the answer. Why are you people bothering Dave with these stupid questions? He’s got awesome things to write about the iron-grey cataphracts of Viruelandia. (Damn, but I love that phrase. I’m going to have to work it into my next project. If I stick to my plan to write the next Rogue Planet novel, it will fit well, come to think of it.)

First, Dave wisely and correctly (and I mean that without sarcasm) dismisses those who would insist on “purity” in their world where Howard’s barbarians, Vance’s wizards, and Tolkien’s elves battle Poul Anderson’s troll and Van Vogt’s displacer beast. (To be clear, that bit after ‘world’ is my boilerplate example of the ‘purity’ of D&D, not Dave’s, though I’m sure, were he here, he’d concur with my description.) He points out that an alien with a blaster is no stranger than a dragon which breathes fire, and the inhabitants of a fantasy city, exposed to phraints and centaurs and rune weavers and the like, would consider aliens just one more species, the blaster merely an exotic magic item. He goes on to write:

“Whittle ‘Till It Fits” Is A Good Motto For Any DM

I have a love, in my own games, of pan-dimensional, alternate-reality, genre mashup themes. I like vast canvases I can paint on, usually in broad strokes, but sometimes drilling down to ridiculously fine details… like covering a million years of history in one long paragraph and then having four pages of inns. I’ve mentioned the “variable detail” aspect of old school before; this is just another example. 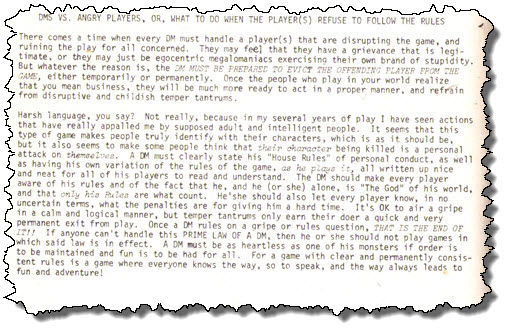 Boy, You’d Almost Think RPGs Tend To Draw People With Poor Social Skills Into Highly Social Situations For The First Time In Their Lives, Or Something

Well said, Mr. Hargrave. There are times to not only say “No”, but “Hell, no!”, and “Hell, no, and never darken my doorway again! Begone, foul spawn of the pits!”

We reach nearly the end of Welcome To Skull Tower. What’s at the very end? The Table of Contents, of course. Seriously. It’s on the inside back cover. Perhaps Dave should not have asked Bizarro Number One to help with the layout.

Next time… maybe next week, maybe not, I might decide to take a brief break for other projects, or I might keep on with this… weekly content is good, and knowing what I’m going to write about each week really helps me produce something… we will get to the third book, The Runes Of Doom!

[1]Or Bldfstd, according to some scholars.

[2]For sufficiently small values of ‘hilarious’.

[3]”Nobody told me we were in a universe with magic space wizards!“