The Runes Of Doom, Part I

Huh. Sounds Kind Of Like The Title Of Some Overpriced Textbook For Some College Course

Probably One Of The Ones Where The Answer To Every Question Is ‘Privilege!’

And we — the editorial ‘we’1  — are back. The editorial cat is trying to sleep on the keyboard, so this article may be more typo-laden than usual, or, in other words, indistinguishable from PERL code. Here begins coverage of the third book in the Arduin Trilogy, so, there’s only six more books to go (if I so choose and if there’s even the tiniest hint of interest from my hypothetical fans). It’s like a Piers Anthony trilogy, but with fewer2 creepy pedophile overtones.

Erol Otus is one of the all-time greats for old-school art, though his work in the original, first-printing, Grimoire was not up to what he’d be producing just a few years later. And Morno brought a clean, distinctive, style, esp. when you consider he was only 17 at the time. But, for my money… and I paid something like 15 bucks for my Trilogy, back when I was 16, when there was a Compleat Strategist in New Jersey… the defining artist for Arduin, and indeed for the spirit, style, and soul of all that is old-school and awesome, is Greg Espinoza. If I win the lottery, I’ll hire him for my own game line (“Lose-A-Fortune Games”), if he’s alive and working. If he’s not alive, I’ll hire a necromancer. If he’s not doing fantasy art anymore, I’ll hire Dick Cheney to convince him. But I digress. 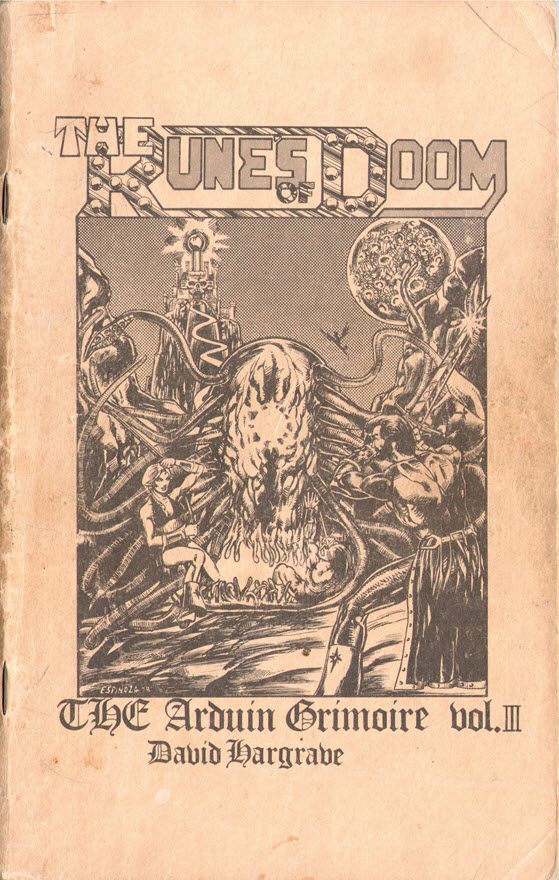 I Know That Thing Was Identified Somewhere, But Damned If I Recall

A bit of googling showed that Greg Espinoza moved on to comic book work, foreshadowed here in the virtually skin-tight armor the guy with the sword is wearing. This scene is simply filled with visual signifiers that define the kind of old-school experience that Arduin exemplified. The monster isn’t any kind of dragon, ogre, or other thing drawn from sanitized Arthurian myth — it’s a Lovecraftian monstrosity, pure pulp sword & sorcery. The low-hanging, giant moon sets the stage as a place not part of any historical era (unless so far in distant and forgotten ages that the moon was much closer). In the background stands a castle with a skull entrance — possibly Skull Tower, for which the prior volume was named. And not only does it have a giant skull door, it also has a giant glowing magic… something… sticking out of the top. The title font isn’t some pseudo-medieval thing, but bolted metal, evoking a science-fiction flare, while the subtitle at the bottom is in a “Ye Olde Dayse” font, subtly hinting at the scope of play.

Something distressing I’d never noticed before: There appears to be an apostrophe between the ‘e’ and the ‘s’ in “Runes”. I suppose it could be a mere design element, but… but…

We start off with an inside cover introduction, wherein we are informed this is the most-information packed of the trilogy, with a hundred monsters, a hundred spells, a hundred idiosyncratic spellings, and an assortment of greater demons. Killing gods, you see, is just unrealistic… so, instead, kill some of these. (I recall them being very nasty indeed… they’re pretty far along in the book, so it will be a while before we get there.)

Next is the table of contents. This might not seem worth noting, but, well, it is. The former editor, Bizarro Number One, who placed the Table of Contents at the end of Skull Tower, has clearly been fired, which am great honor for Bizarro! 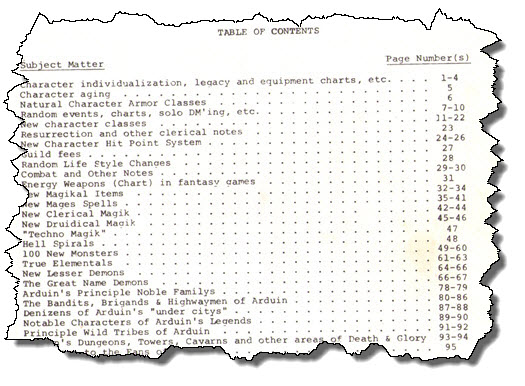 A Preview Of What’s Coming… It’s Going To Be A Wild Ride!

This is a series of charts and tables to add individuality and reality to your half-hobbit/half-kobold psionic ninja. While there were similar charts in Welcome to Skull Tower, those focused on cool things like weird scars, purple hair, and glowing eyes, while these charts are about your social class in a generically medieval setting. I’ve mentioned one of the many defining tensions in early gaming was between the historical wargamers/SCA types on one side, and the sci-fi/comic book types on the other. These charts cater to the former group. The Arduin Trilogy, the product of one man’s mad genius, nonetheless reflects a multitude of interests. The Trilogy veers continuously between the heights of cosmic madness and the picayune details of mundane life.

Nowhere is that more evident than in the chart itself… which lists the usual generic social classes based on a synthesis of hundreds of years of history and dozens of nations into a vague sense of “Ye Olden Dayse“… cross-indexed against Kobbits, Knoblins, and Phraints. (Oh my!)

(I blurred the actual chart because I try to avoid posting too-complete excerpts, but I also wanted the ranges visible.)

Later in the book, saurigs, phraints, and deodanths are covered in more detail… they have very different cultures than Generic Humans, but, hey, they’re all on the same chart. We also see the “I’ve got one page for this chart and three hundred races in my notebooks, screw it, use ‘All Others'” problem return from the Arduin Grimoire.

Taking up a full page, even though it hardly needs to, is the wealth chart, which gives a character their starting gold. It is possible to be a wealthy orphan (which gives you 12 gold) or a poor Close Nobility (which gives you 35 gold).

The next page offers starting gear. This can give you some picks of arms and armor (with a cautionary note that a shield is one piece of armor, a helmet another, and so on), and if you’re really lucky (or from a good background) some additional items. The interesting bit, though, is the note at the bottom.

Gygax editorialized incessantly about the lack of a need for non-combat skills; NPCs made horseshoes, PCs killed them and took the horseshoes, and that was that. Despite this, he was standing against a tide that began rising from the earliest days of D&D — people wanted to not only have more information about their characters non-murderhobo abilities, they wanted mechanics to support them. Dave Hargrave meets the tide halfway…ish… which in this increasingly muddled metaphor, means he got his feet wet? Anyway, this is another one of those “negotiate with the DM” mechanisms which always work so well, and I am wholly unsure what the skill rating of 1-10 means. It provides a number that a motivated DM can use as input into some kind of success/fail formula, but there’s no real framework beyond that. Still, it’s an important piece of evidence towards the ubiquity of the push for some kind of skill system to be bolted on to D&D. (We had three different “proficiency” systems in AD&D1, another one in AD&D 2, and finally a working skill system in D&D3.)

“No thought is usually given to player characters aging during prolonged or campaign game play. In Arduin, however, we believe in reality and…”

“In Arduin, however, we believe in reality and…”

Bwahahahah! OK. OK. I’ve got this.

“In Arduin, however, we believe…”

To hell with it.

OK, some notes: First, Traveller (possibly others, but Traveller is the one I know best) had character aging from the get-go. It was one of the defining traits of the game, along with using trigonometry for space battles. (I am not making that up.) Second, the AD&D DMG was coming out about a year after Runes Of Doom was published, and it did include aging rules. So, as with skills, there was a clear push in the zeitgeist for something like this.,. but unlike skill systems, it was pretty much a dead end in the evolutionary tree of game mechanics. Characters rarely lasted long enough for it to matter — how many PCs die of old age not resulting from a curse/spell/etc? The converged on mechanic, over time, was age categories, used primarily when creating/balancing NPCs, and occasionally for PCs under odd circumstances, but not to really track a PCs age on a scale finer than such categories.

As I keep saying, though — this is the Burgess Shale era of gaming. A thousand different rules concepts and design patterns were tried, and slowly winnowed. Dave’s system tried to reconcile the long lifespans of fantasy races and the differing lifestyles of various classes.

Gack! Dave, I can forgive so many sins, but the lose/loose error really annoys me… wow, I can’t believe I wrote that page seven years ago… like this one, it was inspired by my time on the Warhammer Online forums… it figures the only PVP MMORPG I ever liked died a slow, terrible, death.

That’s a good start… next time, “downtime” event charts, long before “downtime” was a thing, much less “blue booking”.

1 There is no editorial Wii, I have an X-Box.
2 I’d like to thank my wife, and Stannis Baratheon, for drilling that into my head.