In Which We Actually Open The Book

Just reading the PC’s names makes you want to play!

Sorry about the blurry edges; if you think I’m going to press my 37-year-old copy flat just to get a clean scan for the benefit of the three or four people who might read this, you’re nuts. Anyhoo, just look at the PC names of his campaign, and imagine all the cool shit they did, and remember this book was published in 1977, when D&D had only been out for about three years! That’s a LOT of amazing gaming crammed into a very short period of time! I am deeply, profoundly, bitterly envious of the people who got to sit at Dave’s table.

We start with “How To Play The Game”, which notes people are unsure about the “sequence of play” in a fantasy game, so “here is a rundown of most play situations”.

The next line? “Overland Travel”.

Dave goes on to explain that you travel an hour, roll for random encounters, Then follows a bunch of stuff about line of sight, distance to the encounter, chances of an encounter, if the encounter is close, what kind of close encounter it is (OK, I made up those last two), if the monster is frightened or not, if it’s charging, how to determine initiative, and so on. This includes numerous die tables, of the “1-2 this, 3-4 that” type. Oh, wait, did I say “tables”? Bwahahaha! No, the entire “sequence of play”, including odds of random encounters (with modifiers for terrain type and time of day), and all the other folderol I mentioned, are all in one immense paragraph.

Following the rules for rolling random encounters come the rules for experience points, because, why not? In Arduin, you don’t get XP for gold. “It is the act of robbery, not the amount stolen, that gives the thief his experience.” says Dave, and I concur.

This table is, at least, a table. You get 400 XP for dying (and being resurrected), 375 for being the sole survivor of an expedition (oh, that couldn’t possibly go wrong!) or for retrieving the most powerful of artifacts, all the way down to 50 XP for figuring out traps and casting “lesser” spells such as “locks and winds”.

To put these numbers in perspective, here’s the XP chart… (Please note the ‘Saint’ class isn’t actually in this book. Or the Courtesan. 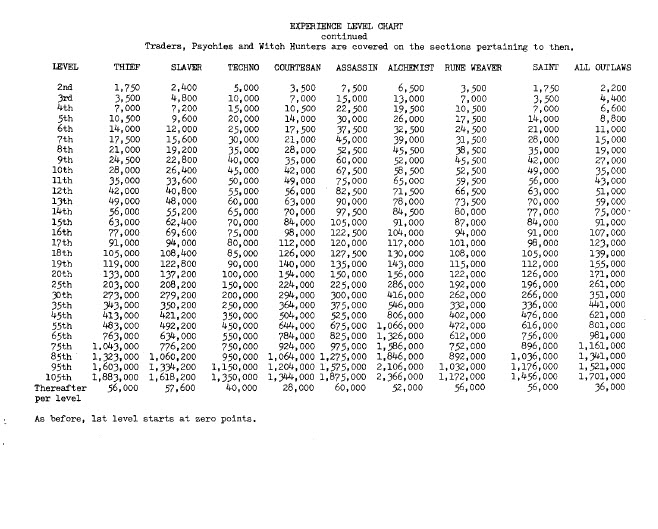 The “Slaver” class isn’t in here, either.

Yes, levels went up to 105. I assume you figured out the “missing” levels by extrapolating from the points given.

I’m just gonna let that “levels go up to 105” thing sink in. First, remember this was published only three years after D&D came out. Second, next time some wannabe “old school Renaissance” type who wasn’t even born when AD&D Second Edition was published tries to tell you that in the Old Days (which he wasn’t around for, but which he heard about from this guy who knows this guy…) it was all fantasy fucking Vietnam and scrabbling for copper pieces and PCs were weak and no one had cool powers and everything now is all WoWMMORPGVideoGameSuperMarioCrap, you just point him this way. I’ll straighten him out. (Or her. One mustn’t be sexist. There’s just as many women repeating tired platitudes they’ve picked up from online forums as there are men. )

Following is another page of XP charts, and then, the Character Limitation Chart. And, hey, y’know what? Posting small articles frequently is probably better than long articles never, so, smeg it, this goes up now.