A Man (Hobgoblin, Nixie, Cave Man) Has Got To Know His Limitations

Now, we turn to character racial class, level, and attribute limits. You damn punk kids might not know this, but time was, there were no half-orc paladins, dwarf archmages, or gnome druids. (Leeky Windstaff is annoyed!) Well, unless you played pretty much any game other than D&D, because racial class/level limits were one of the first “D&Disms” to be flung out as the RPG industry moved past the Cambrian era and into the… damn it, I used to know what came next. Devonian? Anyway, time was (and by “time was”, I mean, it took TSR going belly-up and WOTC taking over in 2000 to finally shed this bit of nonsensical anti-design), races were “balanced” by front-loading them with all sorts of k3wl p0w3rz (such as the power to invoke arguments over if you could read with infravision or not)1, and then, in the off-chance the game lasted long enough, screwing them over by paralyzing them at relatively low levels, so that only humans could advance high enough to kill Thor. (That was, erm, the ultimate goal of D&D, right? To use Deities And Demigods as a monster manual?)

Anyhoo, Arduin of course needed to have such a table, which served to partially replace the old D&D table, due to the many new races supported, not mention the new classes, which… uhm… well, you see, there’s only so much space on the page, and so… erm…

Well, first, of the countless new classes Arduin introduced (to be dealt with soon), only the Psychic is on this chart. As for the rest, erm, “All Others”… Trolls, you see, are just as good as being Slavers as they are Saints.

Seriously. They just ran out of room on the page and said “Fuck it!”.

That’s how we all rolled back then, and it was glorious.

(Oh, the big white blob  is me deliberately whiting out part of the scan, because it turns out this walkthrough requires a lot more illustration than mine usually do, or maybe I just want to share the immense joy2 reading each part of this book still brings to me in a more visceral way, but I also want to stay within the bounds of fair use.

Anyway, I’ve been talking a bit about wonders, strange visions, exotic realms, and that hasn’t been too evident yet. Here’s where it starts. What’s a gnorc? A kobbit? You can play a Fury? A spider can be a fifth level mage? WTF? Felines? Canines?

OK. First, a “*” means “Cannot take this class.” So, there are no Spider Clerics. “**” means “Unlimited”, so a Kobbit can be a 105th level thief. And a number means… y’know, if I have to explain that, how the hell did you end up reading this article? G’wan, shoo!

On the spider thing (From What If #451, “What If Ben Grimm Was Bitten By A Spider That Was Radioactive Due To Cosmic Rays?”)…it was noted:”Normal insects and animals are not smart enough to do much of anything, but there are were-creatures and other types that will fit the bill”, so, there you are.

Only at page 5, and we’re talking about the possibility of 12th level Mermaid Psychics. Meanwhile, in Wisconsin, EGG was starting on his first draft of a rant about how ridiculous pixie-storm giant hybrids were. (But drow cavaliers dual-wielding lances? EGG was totally cool with that.) Battle lines were being drawn, lines which extend to this day, between the dour advocates of low-power, low-magic, low-fun, play, and the liberated, free, and joyous advocates of cyborg ninjas battling dragon/beholder crossbreeds through the corridors of the Death Star. If you can’t tell where my bias lies, check my choice of adjectives. It’s a dead giveaway.

(Acting on the odd assumption anyone reading one of my rants is masochistic enough to read a second, or even a third (if you’re that into pain, I have a good friend who can help you find a skilled professional in that area… not kidding…), they might note there’s some dead horses I beat, again and again, as if they were trolls and I can’t stop them regenerating. There’s two reasons: First, I write this stuff extemporaneously, so, if something inspires me to write a rant once, a similar stimulation will inspire a similar rant. Two, there’s no way to know who is reading this (if anyone is) or in what order, so there’s no reason to assume that any point I made 50-odd posts ago has been already seen, or ever will be seen, so it’s often essential to reiterate the same themes. So it goes.)

Though, to be fair, “race” here (mostly) means “a genuinely different species”, as opposed to “a bunch of made up, arbitrary, and totally random divisions” as it is when it comes to humans. (Though, not sure if “Amazons” are a different species, rather than simply a different culture… )

A few things to note:

Here’s part of page two of the chart, just to show the range of Mr. Hargrave’s vision of D&D… 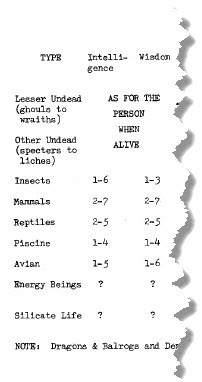 Energy beings, silicate life (hortas), undead… this section, in the rules, is entitled “Character Limitation Chart”, but it, like most of the trilogy, is about transcending limits, about including anything you can imagine, no matter how outre or inconsistent.

Back when I paid attention to RPG.net, there would be continual queries from people trying to play “old school” styles games, regarding if they should include this or that, add thus-and-such a rule, or invoke some particular mechanic, if adding in these things would dilute the purity of the old school experience and corrupt its precious bodily fluids. That they felt they needed to ask such questions told me, instantly, that the idea of what “old school” gaming was all about was being communicated to them wretchedly, to the point of actually teaching the opposite lesson.

The canonical 1970s-era DM had a dozen three-ring binders full of his house rules. Everyone was a game designer, and no one had any idea of “simplicity” as a design aesthetic in and of itself. Older games had far fewer (not necessarily “simpler”, mind you) rules than newer ones, but that had more to do with the cost of paper and the rush to publish in an exploding market than it did any conscious, deliberate, design choice. Hell, the idea of a “design philosophy” for RPGs was still decades away. The genre was too new, too vibrant, too full of potential to be tied down with boundaries and limits. It was the Wyld, all boundless creativity and change, as yet untamed by the Weaver, and far from being corrupted by the Wyrm, otherwise known as Lorraine Williams, and by using 1990s White Wolf terms to describe 1970s D&D gaming, I just made RPGPundit’s head explode. 🙂 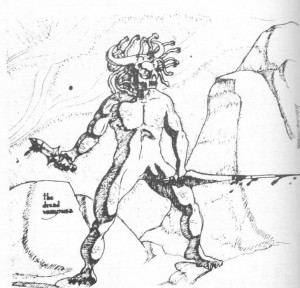 That’s a lance it’s holding, by the way.

1:”Dude, in this issue of Daredevil, he could totally read with his fingers because the letters were cooler than the paper, so I can read with infravision!”

2:Not being sarcastic. I’m allowed to not be once per post.