No, I Have No Idea Why That Struck Me As So Funny. It Just Did, OK?

Sheesh, The Way You People In My Imagination Whine About These Things, You’d Think You Were Paying For Them, Or Something

Alright. Part I of this digression (y’know, I really hated Tristam Shandy in college, but evidently it had an influence on me), discussed the variant rules to be used at the PrinceCon 3 gaming convention in Princeton. Since most of the jokes in this one probably are going to be lame attempts at recurring humor, you’d probably better read that one first.

You’re done? And you came back? Wow, you must run up quite a tab at Madame Wu’s House Of Pain. Anyway, today, we’re discussing magic items, a rather long list of them, in fact… mostly based on the OD&D+Greyhawk lists, but with original concepts and variants mixed in.

We start, as always, with a random table. Most of the stuff on the table is what you’d expect, but there’s a few new things; Magical gems, “medallions” (I assume this means “amulets”) and “crosses”, with quotes in the original — basically, clerical items.

The “Swords” table is pretty standard… the usual mix of “+1, +3 vs left-handed lizard-men with leprosy” sort of thing. A few items stand out… a “Matrix/Mage” sword, for instance, and “Holy/Sacred” swords get their own subtable on the next base, to allow for a wide variety of them. Actually, it looks like “holy” and “sacred” are different types, each going from +2 to +5. At this point, not sure what the difference is.

There’s also a nice long table of “sword abilities”, followed by “extraordinary abilities”, but damned if I can figure out how to determine if a sword has such in the first place. It might be case of “Any place we don’t have a rule, use the D&D rule”, which makes sense under the circumstances. There’s a lot of “*” marks next to the entry, but you have to flip waaaaay ahead to find out what they mean… and they mean different things based on what kind of sword they’re next to.

The random tables go from 34 to 52, and the rest of the book is explaining them. It seems best to skip on to the explanation, as otherwise, this whole article will consist of alternating between “This looks pretty baseline” and “I have no idea what this means”. 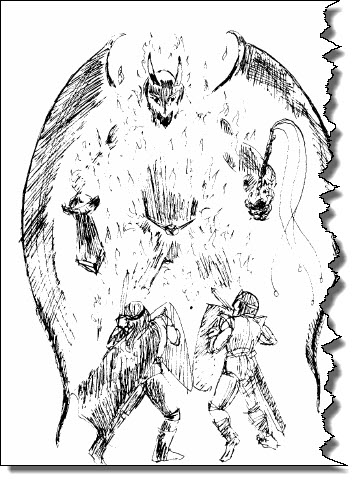 Shouldn’t Gandalf be doing this?

Oh, and because this was in the days before it was easy to set text in columns, and because the charts were pretty narrow, most of the section consists of a series of tables on the left and art on the right. Like you’re seeing now, if this displays on your browser the way it looks in my text editor.

On my way to the description section, I did notice a few things on the charts… like “Military Pick +1, +3 vs. Giant Beetles”, which is the sort of thing that’s so specialized I feel there has to be a story behind it. Also, a category under miscellaneous magic called “Tie Clips and Spices”, two great tastes that go great together, I suppose. Also, “Balls of Bravery”, and both a “Reducing Girdle” and a “Girdle of Reduction”.

Something vaguely Ditko-esque about this one…

Then, a few pages of gems, including “Fighter Gems”, and finally, the descriptions.

“Resistance” gives +10% on saving throws and -1 per die of damage to the appropriate type of attack, with all the usual suspects represented, along with demons and scrying. (You can tell the pre-AD&D fan stuff from the AD&D-era fan stuff by the fact it’s only “demons”, never “demons and devils”. (If it’s “baatezu” or whatever, I don’t wanna hear about it.)

A “*” for most items means “Roll on the appropriate table”. I rather like that for swords of the type “+1, +3 vs. dragons*”, you roll on a random table to see what kind of dragon you get a bonus against… said table to be set up based on the relative population of different species of dragons in the region where the sword was forged, which is simultaneously perfectly logical — people living in the Dismal Dripping Mire Of Sodden Sogginess are unlikely to forge a Sword +1, +3 vs. blue dragons, and if you don’t know why, how the hell did you even find this page?– and perfectly ridiculous, because some DM rolling up a random treasure for a random encounter isn’t going to know or care where a magic sword was made. I think someone coined the phrase “Gygaxian naturalism” for this sort of thinking, and I like it.

BTW, they spell “wielder” as “weilder” everywhere. I’ve been less whiny about spelling errors in this one than I usually am, because it’s not even pretending to be a commercial product, and because, as I noted in Part I, I greatly suspect the authors weren’t English majors, but seriously, didn’t they know the “i before e except after c” song from the Peanuts movie? (Actually, I don’t even know if that movie was out when this was published, and I’m too damn lazy to go look it up on IMDB, which is a particularly special kind of lazy.)

Let’s look at some of the cooler swords:

OK, time to digress once more. As I noted in my Arduin articles, this kind of “+1 vs. Hamsters, -2 vs. Gerbils” mechanic was really, really, common back in Ye Olden Dayse, and I have no frakking idea why. This is, or was, my era. I was 14 when I started playing in 1978. I ought to know the culture well enough to understand it, but in this case, I am fertummelt. I didn’t question it at the time, because it was all new enough that I just took it all at face value. I didn’t even really think much about it until, well, now, writing these articles where I’m doing a careful, close, reading of the text, not so much for scholarly understanding but in the hopes of finding something I can hang a feeble attempt at humor on. At best, I can say it seems like the first pass at what eventually became “Of Slaying”, where a sword had a nice little bonus for general purposes and a larger bonus against a given enemy, but without the understanding of that rule, so it was perceived as a kind of arbitrary thing and simply imitated. (A lot of Burgess shale era stuff showed elements of what’s called cargo cult programming when you see it in code, and the parallels between RPG design and program design become ever more apparent the more of these things I write. In essence, people copied D&D without understanding the ‘why’.)

I could retrofit an explanation… fanwanking it… though. Clearly, magic is random and chaotic. The endless lists of “Hand-axe +2, +3 vs. Frost Giants and Phase Spiders” items are the result of magic being more art than science, that weaving the enchantments was often plagued by strange effects and unforeseen circumstances. Only when the item was complete could the smith be sure what he’d actually made.

Still a lot of ground to cover, and not much time to cover it in. I don’t care what Howard says, 1300 or so words is a good length for an article. So, tune in next week (probably) for Part III of who knows how many, at this point.