Running Naked Through The Wuids

(Which Turns Out To Be New Monsters)

Hey, I actually got comments on my two prior articles, and not of the “I am most expectorantly fumigated with clarity over your postblogs, with much reciprocity will I obviate the contrafibularities” variety. So I look forward to stunned silence in the future, because I can’t have nice things. Anyway, druids.

Druids entered D&D early. They began life as just a “monster” type in Greyhawk (the supplement, not the gazeteer):

BTW, I have both cats helping me write this. Wait, now they’re fighting over the faint traces of chicken grease left from breakfast. And Rocket, despite his negative size modifier to CMD vs. Toaster, emerges victorious. See, reading these articles is just like watching me on Twitch. A constant stream of useless extemporanea that fluffs my word count so that I… wait, I don’t get paid by the word for these… I don’t get paid at all! Back to druids.

By the time of Eldritch Wizardry, druids became a core PC class, whose power levels have fluctuated wildly over the years. Druids were the first official class to be strongly tied to a cultural archetype1. This intrigues me. They weren’t really a part of the common cultural gestalt (I love using fancy academic words I don’t really understand) of the game’s formative era. Could The Wicker Man have been an influence? Or maybe they were a part of the cultural morass surrounding the origin of D&D, just not a part that reached me, a young teen in the rural wastes of New Jersey. (And by “rural wastes”, I mean “densely populated middle class suburbs”.)

The actual Arduin incarnation of the druid was discussed earlier. Despite Dave’s proclamations to the contrary, the earliest Arduin books were clearly intended as supplements to other roleplaying games, and so, druid spells were included from the start… and to the finish, at least of the original trilogy, which brings us to…

May The Blessings Of Dramamine Be Upon Ye

This is a good example of something I’ve discussed at tedious length before, and will now discuss again: Ability delivery mechanisms. What we’ve got here, boils and ghouls, is something that isn’t actually a spell… but there was no other mechanic to use to give this ability to some druids, but not all. There weren’t feats, skills, ‘talent picks’, or any other such things, so, spells would have to do.

Milnahr’s Minor Ritual For Detecting All That Which Lives: Outlines all living things with pale green “St. Elmo’s Fire”. (I am not sure if this includes invisible creatures; if so, it’s a cheap and effective way to nullify that ability.) If used on a single, targeted, creature, the druid rolls percentage dice to find out how “aware” they are of it (“what it eats, etc.”). The problems of figuring out what being 38% “aware” of a creature vs. 61% “aware” are left as an exercise for the reader.

Yalnwyn’s Spell Of The Mystik Moons (Lesser): Awesome name, right? What the spell does is summon three spheres (red, white, and blue, for some reason) which bump, trip, and otherwise “harass” the target. So..

The spell description actually says “balls”, not “orbs”, “spheres”, or “immature and painfully obvious double entendre”. There’s no actual mechanics, the target is just “harassed”, leading to many discussions on exactly what are the combat effects of being harassed by a druid’s balls?

Larissa’s Singing Sands Of Time Spell: Summons a whirling dust devil that makes a melodious whistling sounds, and ages the target 10 years (5 if they save). Sucks if you’re a human, but virtually all other races (per The Arduin Grimoire) have ridiculously long lifespans, and no, that’s not a euphemism.

Druach’s Spell Of The Infinite Insect: Causes the nearest insects (1, +1 for every three levels over that required for use) to grow in size to match the caster’s own hit dice. The newly enlarged (but not actually infinite) insect will fight for, carry, etc., the caster, except 5% of the time, when it is “wild” and will, I presume, attack instead. Probably worth the risks. Since both the number of giant insects and the hit dice of each scale with level, this is a damn useful spell, especially since the mana cost does not go up.

Ovore’s Spell Of The Mystik Moons (Greater): “Same as lesser but balls have the density of stone.” G’night everybody!

Never Bring A Wand To A Laser Fight

With spells done, we go on to “techno magik”. No actual rules, per se, just a half-page essay about why technology is totally cool in a fantasy universe… the ignorant peasants will consider a laser pistol to be a wand of fire, and blueprints to be mystic runes. There was, even in those early days, a constant culture clash over genre bounds and what was and wasn’t “realistic” or “believable”, and, just as it is now, and just as it shall ever be, everyone had a completely subjective, personal, and emotional opinion which they were convinced was objectively correct and the only one which any decent human being would espouse. If your female dwarves don’t have beards, you’re not playing D&D!

Here’s a techno fighting a valpyr. 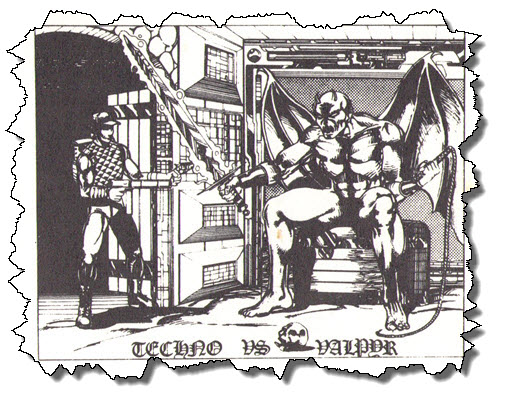 The Sheer Awesome Perfection Of This Image Cannot Be Overstated

I Mean, Seriously, It’s Not Like Anyone’s Going To Make An Amber RPG Or Anything.

The higher level you are, the better the odds of you completing the spiral, albeit with a greater risk of encountering “a denizen of limbo or other such nasty thingy”. Failure may kill you, dump you in a random hell, or cause you to go insane. Being awarded a “You Tried Your Best!” ribbon is not an option. Sorry, millennials.

Blue Gunkies And Crunch Beetles, Part Of This Delicious Breakfast

(Not The Delicious Part)

Argalanthi: 12 to 18 foot long armored bug people from outer space. Not to be confused with phraints, whom they admire, nor with thaelestra, whom they detest. They use flamethrowers, which they hold in the tentacles that surround their jaws.

Black Lion: “Looks: like a giant black lion.” OK, then.

Blue Wind: A “living fog of shadows” that kills you by smothering (1 round per point of Con to do it). It also does 4-24 points of cold damage while you’re inside it (with the new hit point rules, discussed earlier, this will surely kill you long before it it smothers you), and “10 turns after contact all victims become its host”. Even if you’re not dead yet, are feeling much better, and want to go for a walk? And what does “become its host” mean?

Significantly More Deadly Than The Green Gloopy, But Not As Feared As The Red Glorky

Immune to “venom, fear, confusion, stoning, etc.” Et cetera? Uhm… there’s about a gazillion different types of damage in the D&D-esque games, “Et cetera” doesn’t cut it! Level “1 per 50 points”. So a 200 point gunky is considered a fourth level monster… that takes 200 points of damage to kill, attacks twice per turn for 18 points per attack (in addition to draining 12 hit points/round) and drains attributes.  Oh, and it gets stronger as it kills you. I suspect Dave brought this out when a player seriously annoyed him.

Choke Weed: A plant that produces clouds of choking pollen that is particularly nasty for hobbitts (sic), but doesn’t bother orcs. Burning it “doubles its effectiveness”, leading me to think that orcs should grow fields of this around their strongholds, then ignite it when the nassssty hobbitsesss attack them.

“Verticle Crush” Would Be A Good Name For A Band

I enjoy the weird specificity of the “20% chance T-bolts will richochet off its chiten”.

And that’s enough for this week, folks. Next time… more monsters, including seven types of dragons!

Samurai and ninja both showed up early on in Strategic Review and The Dragon, but didn’t become “real” until Oriental Adventures.