Another Product Of The IWFEA 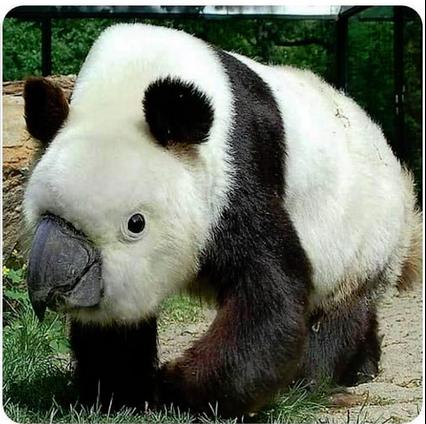 Behold! The majestic parranda, or parrotpanda, or pandaparrot, I suppose. I saw an image on Facebook (unsourced, of course, if the original creator wishes to identify (or indemnify) themselves, I will be happy to credit them), and was immediately inspired by the thought I might manage to get an update in less than a month after the last one! As has become de rigueur (“I surrender”), I will provide stats for AD&D 1e and Pathfinder 2e, and fluff text for both systems and for Earth Delta, Pathfinder 2 edition. 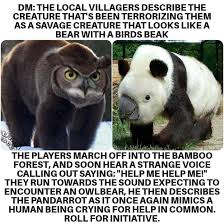 But first, the Facebook post in full, but shrunken, glory, just so no one is confused and thinks I may have had a shred of original thought when creating this.

It is possible the parranda is the product of the same insane wizard who created the owlbear, or an apprentice, or a rival/admirer; it is just as possible it is an entirely independent creation, as wizards (contrary to certain contemptuous assumption) are indeed heavily inclined to ask if they should before trying to find out if they could, and such conversations invariably go like this:

“Should I create this abomination that defies the laws of nature and nature’s gods? Yes, I should, because it will be totally awesome!”

No matter the origin, the parranda has long since escaped the confines of the lab and has become a self-sustaining species, usually found in temperate rainforests, but transportation of the beasts for various purposes means they may be found anywhere, except for deserts, badlands, tundra, and other places with sparse vegetation.

Parrandas are slightly weaker than owlbears, with smaller claws and beaks, and without the powerful hug attack, but with two notable abilities of their own.

First, in combat, they may forego their bite attack to screech, emitting an ear-piercing shriek. All within 6″ of the parranda must save vs. spell or take 2-12 damage and be deafened for the same number of rounds (roll for each separately). Potion bottles, mirrors, and other crystalline or ceramic items must save vs. crushing blow. (To speed play, the DM may have each character roll only once for all items of a given material, that is, all glass items either save or fail, then all ceramic items, etc.)

Second, they can imitate sounds to a truly preternatural degree. They are clever enough to use this to lure prey into ambush. A common tactic is to imitate the sound of a local resident calling for help or screaming in pain — sounds they learn, of course, by killing and eating careless wanderers. This ability goes further; if they are struck by a sound-based attack, such as the shout spell, there is a 50% chance they will be able to imitate the sound and thus duplicate the effects of the spell. Fortunately, this strains their vocal apparatus so that they must be silent for 1-4 rounds, after which, they will have forgotten the sound (unless struck again in that span; then they will then be able to repeat the process once the “time out” ends).

Parrandas are smart enough to make deals to serve as guards, or even occasionally as mounts (in such capacity, they cannot use their claws, lest they unseat their rider). As guards, they can be taught to call out a variety of alerts and warnings.

Whether the result of an alchemist’s vats, a druid’s whimsy (or madness), leaks of energy from chaotic planes, or some other oddity, the creatures known as parrandas (distant cousins of the owlbear) are a rare but not mythical sight in the temperate rainforests of the world, and are sometimes seen elsewhere, in the palaces of indolent nobles who find the creatures amusing, or in other lush, not too cold, regions.

They are notably smarter than their owl/ursine cousins, and use their sound mimicry to lure enemies into an ambush, getting them to race into small clearings or cavern lairs where the parranda’s slow pace is less of an obstacle and it’s harder for prey to escape from their claws and beaks. If foes must be encountered in the open, the screech of the parranda is an effective weapon as well; while it does not fray nerves as the owlbear’s does, it shatters bone, causing painful wounds.

Parrandas live in small family groups, usually a mated couple with a 10% chance of 1-2 nestlings or a 15% chance of 1-2 eggs. An unhatched egg is worth 80-120 gold pieces to the right buyer. While transporting the egg to a buyer, a DC 19 trained Nature check must be made each day to keep it healthy. Three failures means the egg is dead. A critical failure counts as 2 failures, while a critical success negates an existing failure.

Parrandas can be trained as mounts; when ridden, they cannot use their claws, but their rider is immune to their screech. Parrandas trained as guards can call out a variety of signals in response to intruders, and have learned threatening phrases, giving them Intimidation +13 and the ability to attempt demoralize checks.

Parrandas are a typical example of “hybrid” creatures, as distinct from symbiotes like the swarmhound. Nanotechnology (or a genetics company’s marketing division) gone mad produced many different types of beings seemingly sewn together from random germline samples. The bulk of these simply died in their birthing tubes, but a few somehow became stable and fertile. Parrandas, perhaps because they’re still seen as “cute”, have established themselves well in many regions of the Changed Earth. In addition to their previously noted utility as guards or mounts, they are occasionally used as messengers, capable of repeating up to two minutes of speech and returning a reply. That the speech comes in the voice, and with all the emotional intonations, of the original speaker makes them considered more reliable, in some cases, than mere scratches on paper. (Literacy is less common post-Apocalypse than prior, as well.) They can also be used to bypass or control voice-activated systems of the Ancestors, though it may require some work to get the correct phrases in the correct voice. (Most, however, are content to live as wild creatures, not serving as anyone’s watchbeast or living tool.)

Perception +12; low-light vision, scent (imprecise) 30 feet
Skills Athletics +12 , Deception +13 , Stealth +13
Str +6, Dex +2, Con +4, Int -2, Wis +4, Cha +2
Sound Mimicry ◆The parranda can mimic sounds, including speech, which it has heard. It will make a Deception check against the Perception DC of those in range. (If the parranda is clearly visible, the source is obvious and no such check is needed).

AC 21; Fort +15, Ref +12, Will +12
HP 94
Speed 20 feet
Echoing Rebuttal ↻ Trigger The parranda is targeted by a spell or effect that deals sonic damage. Effect The parranda immediately duplicates the sound, targeting the source if it is able (based on the range, etc., of the triggering effect) or nearby enemies if it is not.

Melee ◆ claw +15, Damage 2d8+7 slashing
Melee ◆ beak +11, Damage 2d12+7 piercing
Screech ◆◆ (Auditory, Sonic) The parranda emits a bone-splintering screech. All creatures within a 50 foot emanation must make a basic Fortitude save (DC 20) or take 2d10 sonic damage and be deafened for one minute. The parranda cannot make a beak attack in the same round it uses this power.