And This Was One Of Them 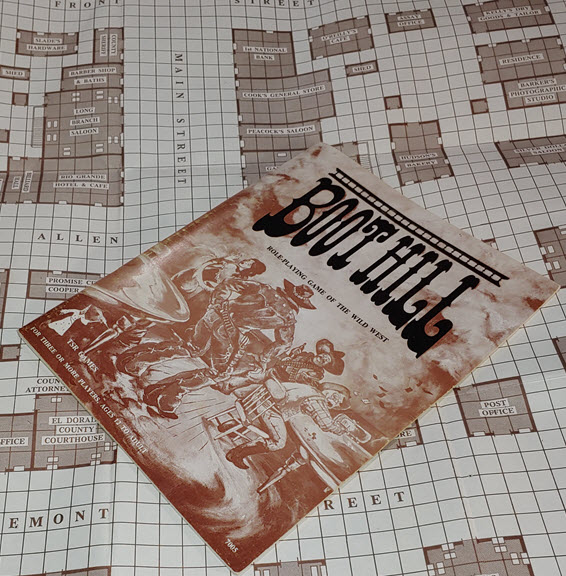 If you look to the right, you’ll see a big wing! Sorry, old joke. Anyroad, there’s the rulebook and a portion of the town map. I suspect every town in any campaign run using this edition looked like this, just like every fight in the Champions game I ran a decade or so ago took place on either the same city street or (flips map) the same abandoned warehouse. Laziness is the wicked stepmother of imagination, or something.

So, let’s get rolling! To do this properly, I would need some pink and white D20s that started off razor-edged but inside of a week had become irregular spheroids. However, I’ll just have to use normal, high-quality dice, instead. I’ll blame that if they don’t roll right.

I am, for the record, working with the first printing (1979) of the Second Edition. The 1st edition, IIRC, was pretty much a character-scale tactical wargame. But this is a full-fledged RPG, meaning it has rules for non-combat actions, inter 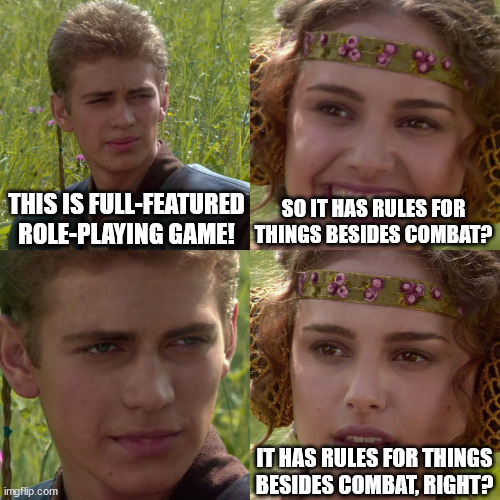 First, let me note the rules state the game can be run with “as few as four players and a referee” (emphasis added), but a campaign might have as many as 20 players. This was a typical aspect of very early RPG design, where it was assumed the “referee” would manage multiple groups with a mix of live “off-stage” (via telephone or hand-written documents, email was barely in existence and hardly an assumed resource) play and in-person games for conflict resolution, by which I mean, “shootouts”, not passing around the talking stick and avoiding “you words”.

As noted above, the rules as written assume old-style “D20s”, where each was number 0-9 twice, and you rolled a “10s” die and a “1s” die, pink and white, respectively. While this was tradition (TRADITION!), I will just use the percentiles I have lying around here somewhere…oh, hey, the bag-o-dice I got at GenCon 2019, never tested in battle! Let’s root through and see what we got, percentile-wise. (I do the “scoop-o-random-dice” thing at the con every time I go.) OK, got some percentiles that almost match. Good enough for government work!

And, uh, that’s it. Well, there’s some additional rules to make sure your character is vaguely competent. For each score I rolled under 25, I add 25, so:

So this means my Speed ends up being +1 and my accuracy is +3.

I think I add the “accuracy Modifier” from Bravery to the two accuracy-related stats “ability scores”  (the bonus numbers), so that means:
Gun Accuracy +13
Throwing Accuracy +10

By the way, record the final modified percentage rolls, not just the modifiers/scores, because experience (defined, quite literally, as “surviving gunfights”) increases the raw percentile score which is then translated into an increased bonus if you cross one of the arbitrary thresholds. Note that you never increase a score that hits 96 or above, so, the only people with 96+ were “born that way”.

I need a name, don’t I? I mean, I’ve been through the desert and my horse has no name, but I’ve got to have a name. A quick trip to an arbitrarily-chosen random-name generator, hit refresh a bit, and I get “Harrison ‘Dust Devil’ Boyle”.

Note that there’s little else but weapons, weapon accessories, and horses on the list. No boots, high, hard, or 10 gallon hats, or even lassos! (Edit: There’s some more non-combat items on a list in the Advanced Rules.)

Here follows the bulk of the book, detailed rules for gunfights and brawls, and never the twain shall meet. No, they’re not. Well, they are. But on a re-read, because I really try to be fair in these things, I see that in the large blocks of text, there’s rules for a “fire phase” every other brawling round, and also how to convert the d20-based brawling modifiers to the %age based shooting modifiers. It’s awkward, and you gotta wonder why they didn’t go for a single system (either d20 or d%), even if they wanted brawling rounds shorter than shooting rounds, but I guess it worked well enough for the time. (Variable “round length” is another weird evolutionary hangover from older wargames, where you might have a “fire phase”, a “move phase”, an “artillery phase”, and so on, each of which might abstract different lengths of time. (For more on phases in wargaming, see Arduin Grimoire, Part II, a few paragraphs down.)

OK, the “Advanced Rules” include quite a hodge-podge of stuff bolted on to turn the original tactical shooter into an RPG, as by 1979, TSR knew that’s where the money was. Some of the rules, like the “Crack Shot” rule, just add more utility to higher stats in combat, while others address activities that might occur between shootouts. This being 1979, just about everything had a unique mini-system. Covered are such things as Intoxication, Gambling, Tracking, and Healing.

There’s also a “Cost of Living” table that includes items such as clothing, a shave and a haircut (which is $0.25… or, if you prefer, two bits(!)), medical services, and typical salaries.

The next 6 pages — out of 34 total! — are dedicated to stats for famous gunslingers. This has the not-so-faint-whiff of “I did my research, now you suffer for it!”, much like the polearms in AD&D.

Then we get some sample scenarios (The OK Corral and the Battle of Coffeyville), and a generic western town, complete with another page and a half of NPC stats!

“Well, what else would you want?”

Uhm… some rules for trick ridin’, bronco bustin’, leapin’ from one stagecoach to another, leapin’ off a balcony onto a horse1, escaping from the robot uprising when they realize how much you’ve been torturing them, etc.? (Yes, of course any GM worthy of the screen can improvise mechanics2 on the fly, but ‘If you really need headlights for your car, you can duct-tape a flashlight to the hood!’ is not a satisfactory answer. And, yes, no game can cover every contingency, and games that try sometimes suffer the irony of having so many rules you can never find the one you’re looking for3, so, you improvise anyway. The best games, in my obviously correct opinion, are those with a strong general resolution mechanic combined with enough specific rules for genre-expected actions that the GM has plenty of scaffolding to build new rules on top of, as needed.)

What’s there is perfect for the original design intent, which was detailed (for the era) shootouts. Boot Hill 2e is a good example of the transitional stage from wargames to RPGs. While we humans like bright lines, the reality is that evolution, of species or ideas, is always a mix of the incremental and the sudden, unevenly applied, producing a lot of awkward hybrids we are forced to dump into one category or another.

Perhaps by coincidence, I bought two old boxed games. The other was also from 1979, and also deals with a non-SFF genre that has a tendency to focus on shooting things. I hadn’t intended this review to be part of a “compare and contrast”, but given that kind of omen — similar time periods, similar underlying themes — I think I’m going to do so. Tune in soon-ish for my look at FGU’s “Gangster!”.

Once I remove the cat. 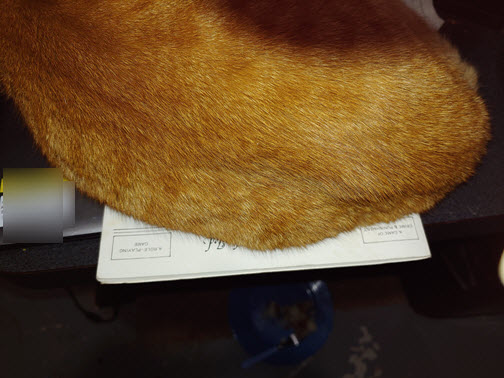 This sleek back belongs to Rocket, the main orange cat, and the one most likely to be found napping near me. Or walking on my keyboard. Or chewing the wires on my PC because he knows I’ll stand up and try to stop him and then he runs away and then comes back and does it again because ‘make Daddy stop working and stand up’ is one of his favorite games.

[1]: I attended a panel on horses in fiction, and was informed this is a damn stupid thing that will probably injure or kill the horse and if you include it in your writing, anyone who knows anything about horses will hunt you down and kill you. Just so you know.

[2]For example, I’d use Speed (as percentiles) as a basis for “full body dexterity” such as acrobatics or any kind of leapin’, such as “leapin’ from the window when the schoolmarm’s husband arrives home unexpectedly”, Bravery as a rough measure of interpersonal skill/impressiveness for Charisma type checks, the higher of the two Accuracy scores for manual dexterity, etc. I’m not saying this kind of stuff is difficult — but then again, after 40 years of playing, it’s not easy for me to tell what might be difficult for someone with less experience, even less easy to judge what might have been difficult in 1979 when there wasn’t such a vast body of cultural knowledge and assumptions so deeply ingrained you might not even realize they were not inherent laws of nature.

[3]I mean, I love GURPS, even have some GURPS stuff professionally published, but it’s a pain when you just know there’s the perfect rule for some situation, but you can’t remember if it’s in GURPS Low-Tech Supplement 4: Pitchforks and Pottery, or in a sidebar in GURPS Medieval Serbia I (Vojislavljević Dynasty).