Because Once The Idea Crawls In, Only Writing Can Get It Out

As  I’m sure no one has noticed (since no one reads this), updates have been sparser than usual lately, much as Death Valley has been hotter than usual. Mostly, this is because my weekends, which are my writing time, have been partially consumed with the mundane chores of existence, and/or working on Earth Delta, and/or learning Fantasy Grounds and drawing maps and making NPCs as I might actually be running a GURPS game soon. That and sometimes passing out all afternoon because I get hit with waves of exhaustion. All of this cuts into time to work on this scream into the uncaring void. And it seems I’m stuck in a monster mode, possibly because that’s where I get inspired, possibly because they’re easy to do in a few hours.

Anyhow, today’s monster was inspired by an article on medieval Amsterdam, which was less about pot & prostitutes and more about torture and death, as said article claimed it was founded on or near a field used for executions, one of which was the classic “breaking on the wheel”, an example of man at his finest. (Remember, you can’t spell “inhumane” without “human”!) In such executions, the victim had their bones broken by having them run over with a heavy wheel, then, taking advantage of the now much more flexible limbs, was interwoven among the spokes of another wheel, then hung, burned, or left to die slowly, often over days. Yay, people!

Naturally, that kind of treatment creates the sort of desire for vengeance which can cause the soul to refuse to move on to its eternal reward (or punishment), or creates a negative energy echo of the person’s spirit, capable of animating what remains of their flesh. (Or whatever in-universe explanation you have for undead.)

Broken are the animate corpses of those slain by “breaking on the wheel”, and are typically found at old public execution sites. They are typically clad in the rags they were executed in (though some may have scavenged clothing from other corpses in the area). They are twisted, terrifying things, with their limbs bending in multiple places and their heads lolling at odd angles. Despite their appearance, they move quickly, hastening towards any living creature. Their goal is simple — to inflict on others the pain that was inflicted on them.

They make two attacks with their hideously segmented arms, flailing rather than punching. If both attacks hit, they have wrapped their limbs around an arm or leg of their target. The victim must then save vs. paralyzation or have the limb (determined randomly) broken. If it’s an arm, they cannot use two handed weapons, or weapon and shield; if it’s their primary arm (90% chance this is the right arm), they will be at -2 to all to-hit rolls. Casters who cast spells with somatic components have a 20% chance of the spell failing (but it is still lost). If it’s a leg, halve movement speed and apply a -2 penalty to AC. Breaking of both arms means weapon use is impossible, as is somatic casting; breaking both legs reduces movement speed to 0 and applies a -4 penalty to AC.

Healing of broken limbs takes time, even with magical aid. Normal healing is 2d6 days; Once per day, a Cure Moderate Wounds may be cast that reduces this by 1d4 days. A cure critical wounds or heal will repair the damage instantly. All hit point damage must be cured before broken bones can begin to heal! DMs may wish to hasten the process if there’s good medical care, such as at a church or monastery, or slow it down if the adventurers are on the march or in a dank dungeon.

As the Broken were executed under strict rules and in accordance with the law, they hate lawful beings (even lawful evil ones) more than others and will generally attack them first.

They are turned as ghasts, however, paladins and lawful clerics are at -1.

Many societies have brutal means of execution. Sometimes, those put to death in particularly cruel and horrific ways, especially when the death is also lingering, will not simply leave behind their mortal shells. Their fear, pain, and anger can draw forth power from other realms, and when their body finally gives out, something is left behind. It may not fully coalesce until decades later, so that these creatures can rise long after the place of their execution has been abandoned.

The Broken are those executed by means of having their bones snapped, and their bodies contorted and left to die by exposure. Nothing remains of their former selves except the memory of agony and the desire to lessen their pain by sharing it with others. They are most often found where prisoners were publicly executed in the past, or in nearby graveyards where the bodies were disposed. They will be generally quiescent until living creatures approach, then they will spring to attack. Their shattered and twisted bodies possess supernatural agility; they can move swiftly over the ruins and rubble that is their typical domain.

AC 25; Fort +15, Ref +12, Will +12
HP 75 (negative healing); Immunities death effects, disease, paralyzed, poison, unconscious; Resistances 5 bludgeoning
Sudden Snap ↻Trigger A creature within the broken’s reach uses a manipulate action or a move action, makes a ranged attack, or leaves a square during a move action it’s using. Effect The broken makes a whipping limb attack against the triggering creature. On a critical hit, the target is grabbed, and the broken may use limb snap as its first action on its next turn if the target has not escaped.

Whipping Limbs ◆◆ The Broken makes two limb whip attacks, at -2, against the same target. This counts as two attacks for purposes of multi-attack penalty, but this is not applied until after this action. If both attacks hit, the Broken attempts to grab the target as part of this action.

Limb Snap ◆ (Press); Requirements Must follow a successful Grab done as part of the Whipping Limbs action. Effect The grabbed creature must succeed at a DC 19 Fortitude save or suffer a broken limb (determine randomly). This is treated as a missing limb of the appropriate type, but will heal in time, and in the meanwhile, prosthetics are not viable. Healing time is 2d6 days. Once per day, a Treat Wounds check can be made; if successful, the day counts as two days, or four days on a critical success. A heal spell heightened to level 4 or above will instantly knit the bones together. 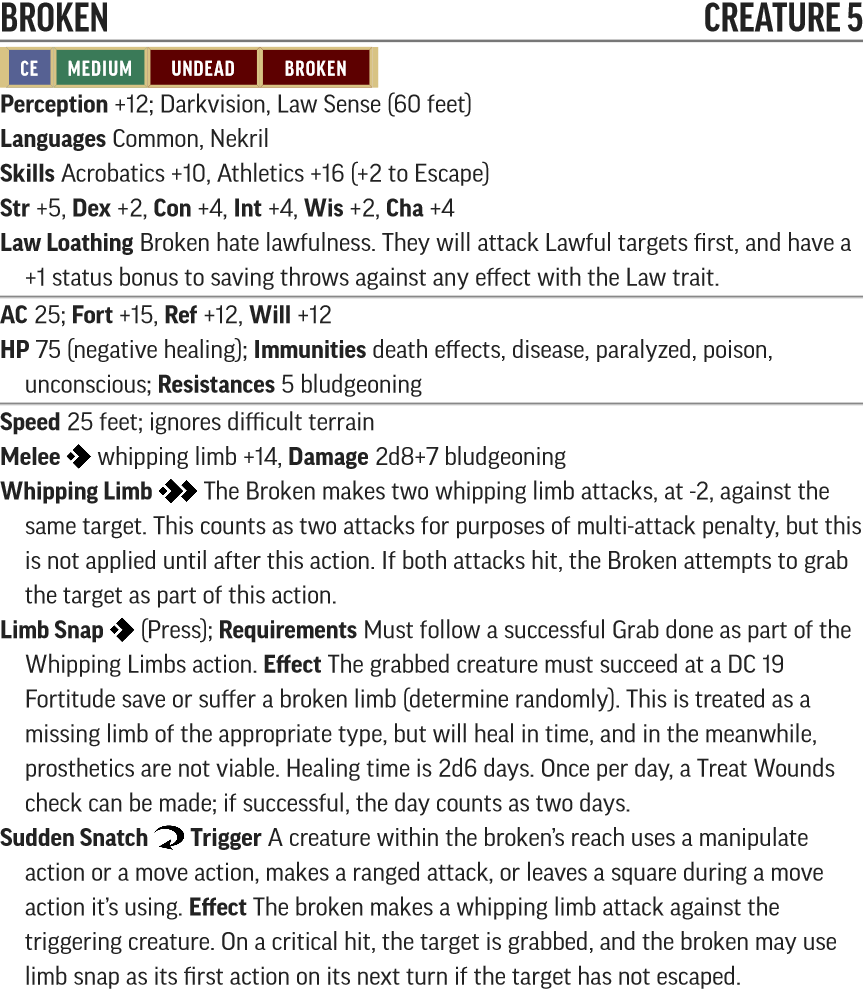