In The Grim Darkness Of The Third Millennium There Is Only Rock!

And Judging From A Random Illustration, Jobs At McDonalds. Grim, Tyrannical, Oppressive, McDonalds.

So, Nothing New, Then?

I Dunno. Maybe The Burgers Are Made From Orphans, Or Something. 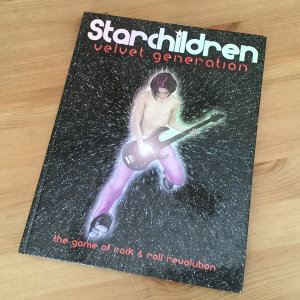 We’re (that’s me and my helper cats, who, at the moment, are actually helping by virtue of not being here) taking a break from RPGs produced in the 1970s to look at a game produced in the early 2000s that uses the cultural tropes of the 1970s for a game set in the 2070s. Got it? Good. Now, does the chalice from the palace have the pellet with the poison? No, that’s the flagon with the dragon.

The commentary in the Acknowledgments page informs us that although the game contains references to sex, drugs, and rock&roll, “XIG Games does not officially endorse any such activities except under guidance of a competent professional”. Oh, and the game contains a subliminal message when played backwards. So you start with characters getting wiped in a TPK and end by rolling them up?

I’m going to take the tongue-in-cheekness of the Acknowledgments into account when reading.

It About 70 Years From When This Was Published

The introduction informs us that the world was changed when the first Starchildren came to Earth in 2071, and that we will join the action in 2073. Not bad — there’s enough time for the setting to establish itself, but not a huge amount of history to learn or hard-coded backstory for the part of the timeline the PCs are a part of. The Ministry of Music has begun “a terrifying crackdown on illegal and subversive rock music”. Damn, Voldemort must be back in charge. We are also introduced to the “Blue Army”, a violent splinter faction of Starchildren, and “the Osterberg Institute”, the “paranoid and xenophobic” scientists whose paranoia and xenophobia is based on nothing more than the fact aliens have landed, disguised themselves as humans, and started a mass movement to undermine the government. What a flimsy pretext! What are you gonna do? Haters gonna’ hate.

Working For The Man

Actually, The Man does all the work. That’s this game’s version of the GM. By the 2000s, the 90s trend of coming up with funky names for common parts of RPGs was dying like disco (see, this is a game about music, so, I made a music reference), but, much like the old man in Monty Python And The Holy Grail, it wasn’t dead yet. NPCs are “The Man’s character”, or “MC”. At least PCs are still PCs.

And I Want To Be A Paperback Writer…

“Chapters Two through Four of this book help bring the setting to life, and are written from the points of view of people who lived through it.”

In other words, I’ve got to slog through three chapters of fiction before I get to start creating a character. #FML.

Do you people appreciate what I do for you? The sacrifices I make? I could be losing another game of Civ VI, but noooooo, I’m reading this. Feh.

Our game published in real 2003 about a fictional 2073  that is inspired by the culture of real 1973 begins with excerpts from a book written in fictional 2091 about fictional 2073. There will be a quiz later. I’m going to try to summarize so we can get to the core of creating a character while still having some context as to what I’m creating.

In the 2040s, psychologists and sociologists decided that rock & roll was dangerous and subversive. I guess Tipper Gore won in the long run. The 2040s were an era of depression following a long war, class conflict, and economic despair, where the masses were desperate for simple solutions and the promise of a coming utopia following the removal of negative influences and dangerous ideas. Hm. Sounds familiar.

In 2047, violence erupted at a Times Square protest, and music was blamed. Within two years, music became a “controlled substance” in most of the world. The motto of the time was “Don’t insulate, isolate!”, meaning, instead of just tuning out or walking away if you heard something you didn’t like, all “negative influence” needed to be purged. Hmm. So, Tipper Gore and today’s campus activists won. Damn. This is one hell of a dystopia, I tell you what.

Various international bodies eventually merged into the global International Culture Correction and Control, or ICCC. The Ministry of Music (MoM) became known to the rebels as “Mad Mother”.  All unapproved items (i.e., anything anyone would want) became illegal contraband. If Grampa didn’t remember to toss out his old Justin Bieber CDs, it was curtains for him.

The music industry was reduced to peddling “New music”: Muzak on steroids, or maybe on sleeping pills — utterly bland, featureless, drivel. Radio was even worse… aw… that’s cute. In 2003, people believe radio would still exist in 2073. Thus, an era began of bootleg music, exploiting the vast demand for which there was no longer any legal supply. Capitalism, people. Ka-ching!

(Oh, the most popular legal entertainment is pinball… without any of the fancier modern features, alongside badminton and bowling. Kill me now.)

The “Rock Resistance” began in 2070 in New York City, at first a disorganized rabble that was regularly beaten up by the cops. They inspired copycats, and the movement started to spread. “Luckily, the Rock Resistance soon became Velvet, thanks to the dazzling inspiration and leadership of the Starchildren.”

The next chapter is in the form of a recording made by an undercover member of the ministry of music, with only the target’s side of the conversation recorded. This creates the illusion they are describing the world’s setting to you, the reader. Again, I’m mostly going to try to summarize enough to put what follows in context.

A reminder: I write these things linearly and extemporaneously, page by page. So when I finally get to chargen, I may end up backtracking.

A sidebar notes that in 2073, using a BBS(!) or the “increasingly risky internet” is a bad way to share music. Tangible media includes a 2″ disk which can store several days worth of high quality data, a data chip “about the size of a quarter”, or good ol’ vinyl. The term “tape” is used to refer to any musical media whatsoever, although no one uses actual tape.

“Dives” are where illegal musicians perform; “Record managers” are basically pimps (so, nothing’s changed), bribing cops and arranging gigs. Many have other illegal interests on the side.

We then get about two pages of details about how Velvet is organized and maintained, using a kind of ad-hoc networks assembled via portable servers and routers, along with a lot of what old folks like me call “sneakernet”.

We are also introduced to the concept of “Blackholes”: Starchildren, or something like them, working for the Ministry. And, as noted earlier, the Blue Army, the violent splinter faction of Velvet.

In which we finally get some background on the Starchildren. Yay. This takes the form of an interview with “Stainless Pakistan”, set in 2078. Trying to distill out the key points.

OK, the text gets more text-y at this point, and so will I. It all started in 1972, when radio and TV signals from Earth reached a world “billions of light years away” — they acknowledge the impossibility of this, but there’s no in-world explanation for the phenomenon. The transmissions lasted only five years… again, no explanation why… but transformed the alien world.

Enraptured by Earth music, they built a generation ship and set out for a fifty year journey. Those born on the ship would become the Starchildren, naturally.

They originally planned to arrive in a public display, but after seeing what Earth had become, made multiple clandestine landings in various wilderness areas, then set out to the big cities, instruments in tow.

Their bodies are mostly human-seeming, but these are not their native species’ form… that is unknown, even to them. They have an unearthly mien to them, being pale, slightly blue, and unusually thin. They can also perform minor alterations to their form, to look more human, or to create cosmetic changes to skin tone, hair length and color, or fingernails. The very skilled can use this ability to heal wounds.There are no Starchild country musicians.