As Inspired By A Throwaway Line On Voltron 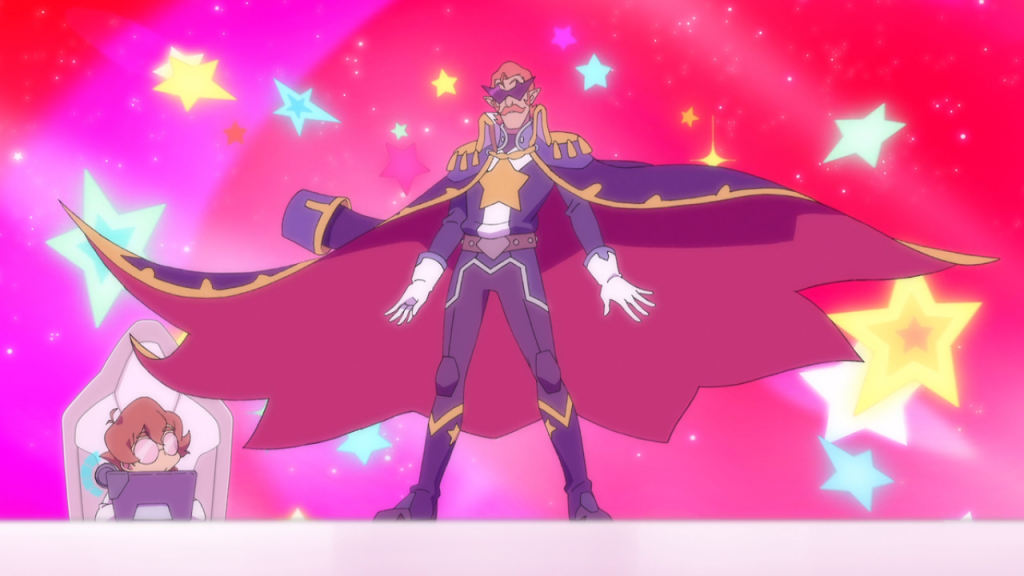 All Within 30′ Must Save Vs. Awesome

Just so you know the inspiration… it’s that guy, in the picture, who commented that he was an intergalactic fashion pirate in his youth (as shown by the outfit he is wearing, which is marginally flashier than his usual togs… and he looks perfect for a game of Starchildren, now that I think about it.) As soon as I heard that phrase, which was this morning, I knew I had to write it up as a Theme for Starfinder. Here you go.

It doesn’t matter what you do, so long as you look good doing it! Regardless of where you are and who you’re with, you know how to dress to impress… or to achieve any other goal. You travel the stars seeking out new looks, styles, and accessories, gleefully incorporating bits and pieces from every race and culture to create your own unique and inimitable style. This habit of borrowing any concept, be it a pattern, a hairstyle, or a unique piece of clothing, regardless of its cultural origin or context, is why some call you a “pirate”. You wear the term — as you wear anything else — with pride and flair.

You gain a +5 to all Culture checks to determine someone’s position in their society and/or planet/region of origin by their clothes, jewelry, tattoos or other body ornaments, or makeup. You further get a +2 to Perception checks to penetrate a Disguise which relies on correct fashion sense to pull off. (“That’s not the Duke of East Proxima! No East Proximan of noble birth would wear purple gloves to a meal where fish is being served!”). Disguise is a class skill for  you; if it is already a class skill, you gain a +1 bonus instead.

You’ve assembled a superbly portable but highly flexible collection of accessories which you can quickly use to modify your current appearance without actually changing your underlying outfit. Given one minute, you can choose to “blend in” or “stand out” by making quick changes to the details of whatever you’re wearing. If you choose “blend in”, you gain a +2 on Gather Information checks, as you look like you belong in the area. If you choose “stand out”, you may make a Bluff (Diversion) check for an ally, as your outlandish garb draws the attention of the crowd. (You can attempt this only once in the same general region per day.) This also acts as an advanced Disguise Kit, granting a +2 bonus to uses of that skill.

Your ability to mix and match to perfection when it comes to high fashion is not without its practical applications. You can install an armor upgrade up to two levels higher than the armor itself, or, you can gain a +1 bonus to EAC and KAC when wearing armor. You can change which of these abilities applies as you wish, but you must remove any overpowered upgrades if you wish to gain the AC bonus.

There’s no limit to ways in which various types of clothing, jewels, and other bodily decoration can be combined to create exactly the impression desired. Twice a day, if you visit some area with a rich selection of items to look at, try on, or buy (a mall or shopping center on an advanced world, or a bazaar or marketplace on more primitive planets), and spend 10 minutes or more exploring, haggling, and trying things on, you may regain a Resolve point.

I wanted to try to avoid too much overlap with the Envoy class or the Icon theme. This caused me to go through a lot of changes as I worked on this, in particular the 12th level power. I went through many variants on that, until finally having a small epiphany (but I’m seeing a doctor about that on Monday) and coming up with a non-social ability that still fits nicely with the overall theme. For those who care (yeah, like anyone reads this site), here’s what used to be there in an earlier draft.

It’s not a matter of you being fashionable… whatever you’re doing is fashionable! This has several benefits. After you’ve been on any vaguely civilized world for a few hours, the urban centers will spawn people imitating your look, which imposes a -4 penalty on Gather Information checks made by people to find you. In addition, you gain a +4 bonus on Diplomacy checks to get into exclusive parties, trendy clubs, and other such gatherings, even if normally you’d have to sneak in. (You will be expected to be visible and active once you get in, so sneaking away from the celebration to download the encryption key to the Baron’s data vault will take some doing. But that’s what your entourage… I mean, the other PCs… are for.)