Back From The Dead (Kind Of)

It’s Been A While

Honestly, I Have No Idea Where I Left Off Or What I Was Talking About

Story Of My Life, Really.

And, hey, I got a plugin working that finally – finally – lets me do what I could do on a 128K Macintosh back in 1985 and just pick a font I like from a list and have it (hopefully) show up. So in the spirit of the book, I am using some vaguely medieval/ancient looking fonts for the header and body text. This text font is “Cagliostro”. The headers are “Metal Mania”. Let’s hope it actually renders/displays the same way it looks in my editor. What You See Is What You Pray You Get.

According to my last article, I promised “jewels”. So, let’s go with that.

We get a quick paragraph of “lots of sapient beings like gems”, and some fluff text, and then a bit of rules framework. The gems about to be detailed herein have some potential mystical properties, and using gems too small to contain or focus a spell may have dire consequences. To use the gems, you must carve appropriate runes on or within the stone, and spells which shape/manipulate objects cannot be used. Screw you, munchkins! In another caveat that was surely added after a too-smart-for-their-own-good player tried it, gems cannot be combined: You can’t glue two 2-gram stones to make a 4-gram stone, and it’s clear from context this includes using magic to merge the items.

Here’s a look at the “jewels” table. As I feared when I started this series, scanning pages has basically cracked the spine of my ancient book. Sigh. The things I do for my imaginary audience. (Oh, and looking in my folder, I’d already scanned this page a few months ago, in anticipation of needing it, so I cracked the spine further for nothing. That’s a perfect metaphor for my life at the moment. Come for the feeble attempts at humorous commentary about classic works of gaming lore, stay for the maudlin self-pity!) 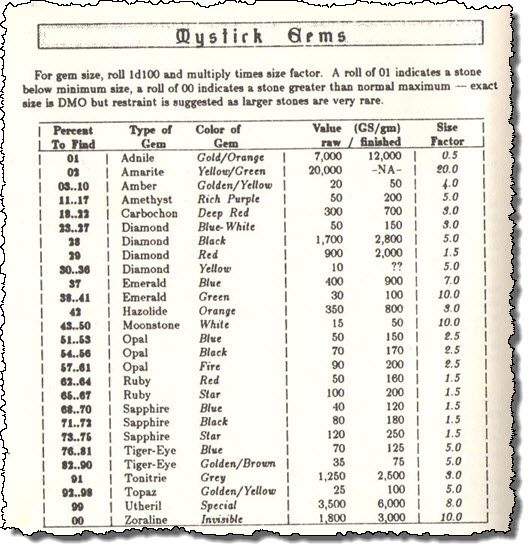 This Is OK, But Nowhere Near As Cool As The Arduin Gems Table In Skull Tower

OK, hopefully, that’s large enough to see, but not so large as to make this unrenderable on various devices, not that anyone reads this anyway, but I digress. For those wondering, the Much Cooler table referenced in the image caption is discussed herein.

As you see, there’s a straightforward system to determine gem size (in grams), based on a linear d100 roll, with an option for going below or above the min/max in rare cases. I’d argue that a mechanic that progressively reduced the chances of a large gem would be more “realistic”, but this works for the purposes herein.

The rules for “enhancing” the gems to grant them mystical powers are discussed in the ensuing section. Each gem is described in more detail, and its specific use as a magic enhancer/focus is laid out. This is done at a level of clarity a cut above the older gaming supplements I’ve discussed (which might have been nothing more than a few words like “good for charms” or “favored by druids”); we can see the transition happening from “someone transcribing their homebrew notes” to “realizing they’re writing for an audience of people not actually in their game”.

A good example of this is the very first entry, and it’s totally not being picked because it’s on the same two-page spread I’ve already scanned and I don’t want to scan another page.

I Pondered The Second Paragraph For A While And Realized It Probably Applies To Spells That Hurl Physical Projectile, Like Arrows, At A Target. Maybe.

The various other gem powers are just narrow enough to be interesting (in my opinion), as opposed to either “so specialized you will never see the benefit unless you know well in advance you’ll need it” or “so broad no caster could be without this if they have half a brain”. Granted, I am skimming, not doing a deep utility analysis, so there may be exploits lurking.

By Which We Mean “Giant Spiders”

What, You Thought We Meant Like Avalanches Or Something?

We start with comments on the Greater Tunnel and Maze spiders, which construct artificial surfaces over canyons and crevices, luring travelers who then plunge through into a labyrinth of sticky webs patrolled by the giant beasts. The largest, it is noted, even disguise the upper surface with plant life and so forth to complete the illusion. The full details are “see below”, but before we “see below”, we get to the “Aedificare Spider (Arachne Magnissimus)” and “Aedificare Termite (Psuedo-Archetectonis)”, which are symbiotic entities who, as colony creatures, create complex cavern and maze systems populated with all manner of creatures that exist to lure humans towards their doom. The “Arachne Magnissimus” is a psychic feeder that draws nourishment from “courage, intellectual passion, and berserker rage”… characteristics commonly found in “adventurers”.

In short, dungeons in the classic sense of “random collections of rooms, traps, and treasure inhabited by a bizarre mix of creatures and having no discernible ecosystem” are, in fact, the complex traps created by intelligent, possibly demonic, spiders.

Make sense to me!

(I had to google it… “aedificare” is the present active infinitive (I copied that, I do not know what it means and won’t claim to) of “aedifico”, which means “craft” or “build”. Who says RPGs ain’t edumacational? (My knowledge of Latin pretty much starts and ends with “People called Romanes, they go the house.”))

Ah, but now we get back to the more “normal” spiders, as in, actual killable monsters. Why we veered off and back again is a subject best not contemplated beyond “It’s Old School. Deal.”

The Greater Tunnel Spider constructs a web tunnel, disguised to look like rough stone or earth, and waits for prey to enter. It then seals the entrance and traps the intruder by “wrapping the tunnel around [them]”, which is a little vague, and injecting them with paralytic poison.

The Greater Maze Spider is similar, but constructs elaborate web mazes, which it can slowly alter and reshape as the prey traverses them. Such changes are not detectable by dwarves, as these mazes are not natural rock formations (and somehow, dwarves never notice this fact, either).

The Greatest Maze Spider constructs astoundingly complex and quasi-permanent mazes, which may even contain realistic-seeming doors and “fountains” that look like they contain fresh water but produce paralytic poison.

The Dragon Tree folks seem to have taken the ancient joke that adventurers are so common that entire species evolved solely to prey on them, and added layers of pseudo-scientific detail and justification, wrapped in quasi-scholarly text and “researchers notes”.

Did I mention I love this sort of thing? From my earliest exposure to horrid pseudo-latin dragon names in the AD&D 1e Monster Manual, this has appealed to me at a deep, emotional, level. So, bravo, Dragon Tree Press!

We then get, by the way, more spiders, all on the general theme of “things that look like other things”, such as the Greater Bridge Spider (Arachnidae Transitii), the Stump Spider (Nemesis Assassinini), the Silver Tree Spider (Arachnidae Argentii), and the Road Runner (Velocitus Tremenjus ). (Maybe not that last one…)

After that, another two pages of spiders, including Tent Spiders (ranging in size from the Pup-Tent Spider (Canopus Praetorium Minor) to the Pavilion Spider (Canopus Papillio)), and the Lasso Spider, Grave-Digger Spider, Pit Spider, and Breat-Plate Spider. (They all have latin names, I just ain’t typin’ them all for you.)

And more! How about the Shield Tick, which is a giant tick that camouflages itself as Samuel L. Jackson? (You’ll get it eventually…), as well as a few assorted beetles and bugs.

All of this is pretty cool, but little of it is thematically linked to the book’s alleged focus on the dead/undead/etc., except by the thin thread of “Well, you look for dead or undead in tombs and crypts and stuff, and these monsters lurk in those kinds of places, except all the ones that don’t”. Ah well. Old School!

Because why should animals have all the fun? In a classic gaming world, everything wants to kill you. I pay some tribute to this idea myself, with the bedbug. These plants are not the usual monsters w/hit points and attacks, but semi-natural phenomenon with unusual adaptive strategies. A few of them are:

Dreamer’s Poppy: This red plant is both soporific and addictive, and unlike many such plants, can affect some kinds of golem, especially those made of tin. (I, erm, may have made up that last bit.)

Miser’s Croup: Another good example of “evolving to exploit adventurers”. This plant casts an illusion that makes its seeds seem valuable, so that those failing the save will drop their loot and carry off the seeds, instead. When the illusion wears off, the seeds are discarded and will eventually take root. It’s a clever concept I have not seen used elsewhere, so, yoink! I am totally stealing it.

Vampire Moss: Another unusual creation, this moss can act like a ring of regeneration (the specifics are vague; I guess if you’re standing on a patch of it?), but it also produces pheromones that compel you to fight with your allies. You fight, you heal, and your blood fertilizes the plant.

Next section is about doors. No information, yet, on if they should be painted black or provide the soundtrack to Vietnam movies.