Not Just The Name Of A Great Sixties Acid Rock Band!

Not That It Ever Was, I Mean, I Just Made That Up, But You Damn Kids Might Not Know That, Because, Kids

Hang On, Need To Adjust My Belt Onion And Go Yell At Clouds

(The heading font is called “Philosopher”. I kind of like it. Well, obviously, if I didn’t like it, I wouldn’t have jumped through all the friggin’ hoops needed to install it. Look, people, it took me like eight years to finally be able to futz with fonts in this stupid blog, so, futz I shall!)

Wait, what am I writing about again?

A week or so ago, I found this article on genetically engineered electric mushrooms, and declared that “lightning mushroom” was the most Gygaxian thing ever. Thus, it occurred to me that if a thing is Gygaxian, it must be described in a Gygaxian manner, and so, without further ado (or adon’t, to steal a Muppet Show gag), I present to you the blitzroom! In two exciting flavors, garlic and spicy thai! No, wait, I mean, AD&D and Pathfinder! 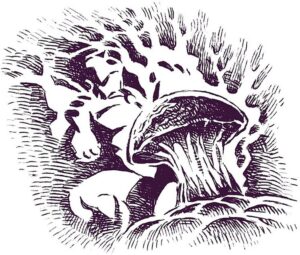 Most sages contend that the blitzroom, sometimes called the “lightning mushroom”, “fungus, electric blue”, or “shockspore”, is the result of rare interplay between fungal fields already somehow tainted with ambient magic and transient rifts to the quasi-elemental plane of lightning, while a few claim it is the product of deliberate experiments by insane alchemists. (This latter presumes the as-yet entirely hypothetical existence of non-insane alchemists.)

Blitzrooms resemble large (2′ to 5′ stalk, with a cap about 3/4 as wide as the stalk is high) mushrooms, colored various shades of blue, purple, and mauve. Those approaching within 15 feet or so may feel their hair standing on end or notice slight sparks crackling from metal objects. As soon as anything gets within 2″ (10 feet), the blitzroom will attack, which it does by shooting a bolt of lightning (6″ range) at a random target within range. Creatures in metal armor are twice as likely to be selected as those wearing cloth or leather. Each attack does 3d6 damage, with a save vs. breath weapon resulting in half damage.If all three dice on the damage roll show the same number, the bolt arcs to the nearest other target (roll randomly if more than one candidate). This can repeat indefinitely.

Once the attack has begun, blitzrooms will use their limited mobility to move closer to retreating prey, but will not pursue if the distance becomes too great.

If struck by a metallic weapon, a blitzroom sends a shocking blast traveling back along the blade, dealing 1d6 points of electrical damage with no saving throw, unless the target chooses to instantly drop their weapon upon striking the fungus. Attempting to retrieve a fallen metal object within 1″ of a blitzroom results in 1d3 electrical damage with no save, unless exceptional care is taken.

The blitzroom’s attacks tend to melt coins into useless droplets, fuse armor, and destroy weapons, but objects resistant to lightning, such as gems, ivory, or leather armor, may be found intact among the remains of prior victims. There is a 10% chance per blitzroom in a patch of such items existing.

Blitzrooms can often be found in patches blocking particular rooms or corridors, placed there as guardians. Presumably, if this was done, a method of bypassing them exists so that legitimate inhabitants of the area can avoid them. Canny players may seek such pathways, but it is also possible that they no longer function, or that the blitzrooms are naturally occurring and neither a passage around them, nor any treasure worth the effort beyond them, exists.

Powdered blitzroom stalk can be a part of the formula for the ink needed to pen a scroll of lightning bolt, or an ingredient in a potion of blue dragon control.

For Pathfinder, it seems more appropriate to write this up as a hazard, rather than a creature.

Most sages contend that the blitzroom, sometimes called the “lightning mushroom”, “fungus, electric blue”, or “shockspore”, is the result of rare interplay between fungal fields already somehow tainted with ambient magic and transient rifts to the quasi-elemental plane of lightning, while a few claim it is the product of deliberate experiments by insane alchemists. (This latter presumes the as-yet entirely hypothetical existence of non-insane alchemists.)

Blitzrooms resemble large (2′ to 5′ stalk, with a cap about 3/4 as wide as the stalk is high) mushrooms, colored various shades of blue, purple, and mauve. Each occupies a 5′ square. It is not uncommon for several to be together in an area, in which case, each is considered an individual and must be dealt with. (CR and XP must be adjusted accordingly.) A large patch (called, for unknown reasons, a tesla) can be quite dangerous to groups without good area affect attacks or which otherwise will be exposed for several rounds.

A DC 15 Survival or DC 18 Perception check can be made to detect a blitzroom if one is within 20′, as hair will begin to stand on end and sparks may crackle from metal objects.

Anyone approaching within 15′ of a blitzroom will trigger it to attack, as will any attack made against it from any distance within range. It fires a barrage of bolts doing 4d6 electricity damage (Reflex save DC 17 for half) randomly targeting one individual within 30′. There is a 50% chance only those wearing metal armor will be included in the possible targets; this is rolled each round. (So if there are two characters out of four wearing metal, there is 50% change the target will be one of those two; if this fails, it will be any of the four.)

Note that the range of its lightning is 30′; it instinctively waits until prey is closer if it is not attacked first.

There is a 25% chance that the bolt will arc to a second target. This roll is repeated, so it may arc several times if the party is unlucky.

A blitzroom has AC 16, 25 hit points, and DR 10/bludgeoning or slashing. Any damage done by electricity heals it instead.

Anyone attacking in melee with a metallic weapon must make a DC 17 Reflex save or both they and their weapon take 1d6 damage (ignoring hardness).

Blitzrooms can be wholly natural phenomenon (as natural as a lightning-tossing mushroom can be, at any rate), or they can be set up as guardians for a particular area, or cultivated by creatures immune to electricity to create hazardous obstacles through which they can move freely (note they may still be randomly targeted by the blitzroom, thus sparing the PCs for a round), forcing enemies to divert resources to clearing out the fungi rather than pressing the attack. Blue dragons, in particular, are likely to have them within their lairs, and may have mutated or magically enhanced specimens of greater size and destructive potential.