The Gems Of Arduin

OK! Last week I wrote a short article, and forgot to post it. It’s posted now. I’m claiming it as not breaking my weekly schedule. The fact no one but me read it last week hardly matters; my readership count for posted, unposted, and purely imaginary articles remains roughly equal.

But this week, I have no excuse for a shorter article; I’m home all day (probably). So let’s get going!

Hey, I just had to work this in. There’s a small list of some goods and services, with notes, in the typical Arduin style, such things as shoeing a horse (1-5 pennies), mailing a letter, buying salt, and “a bottle of wine” which is “a penny and up”. That has the following footnote:

I Want To Write A Random Cheap Wine Name Table

Please also note the rate at which silver coating wears off. Keep track of each hit, folks! (Or reserve your silver sword for fighting undead.) Frankly, this seems too simple and predictable for Real Old School… I’d make it “2d10% per hit, rolled secretly, so you never know unless you take time to inspect the blade after a fight and see if the coating is still intact”.

Here’s an example of one of my favorite things to make an example of: Variable Level of Detail, or VLD, an acronym I coined now and will forget by my next post. A common feature of Old School Games was highly abstract, simplified rules for somethings, and insanely specific and detailed rules for others, with the reasoning behind which concept got which treatment being wholly obscure to anyone but the rules writer. (“So, wait… this game has more pages of rules and modifiers for throwing things from one PC to another than it does for all of melee combat?” — this is not made-up snark. This is, in fact, a literal and accurate description of Space Opera. ) And so it is with ropes.

No Modifiers For Rope Composition Or Previous Wear & Tear? Foo.

Because there’s nothing like hearing the players say “Well, we rope ourselves together so we don’t fall into the pit!” and then saying, “Well, let me just roll on the rope breakage chart!” (And I’ll bet at least one player found a way to invoke this chart when their character was the subject of a little mob justice…)

I can’t believe Pathfinder doesn’t have a chart like this. I ought to write one.

The next page is a price list that supplements the list in the Arduin Grimoire. I’m going to include  a slice of it to show the breadth of stuff you could buy, but it’s mostly fairly mundane and sensible. It is important, to me, because it conveys the sense of a world that lurks beyond the bounds of the PCs, and it can inspire creativity in odd ways. What can one do with some bagpipes, a jar of paste, and a bilge pump?

I am not sure if what “Elf Tea” does for you. It might be covered later. I’m betting it’s one of those really weak, thin, teas that 20-somethings who only eat gluten-free organic locally sourced heirloom radishes picked by union labor drink. (And is the Pixie Wine made from real pixies? Well, actually, near the end of Book III, there’s something… but, no. Spoilers!)

And what kind of Old School supplement would Welcome to Skull Tower be, if it didn’t correct the prior supplement?

UN-altered REPRODUCTION and DISSEMINATION of this IMPORTANT Information is ENCOURAGED

Let’s see who’s old enough to get the caption…

The next few pages are, to me, some of the most important in the trilogy. They’re not the goofiest, or the strangest, or the most mechanically complex. They’re simple lists of things, like the pages we’ve been covering for several posts now, but they ignited a spark in my imagination way back when, and that spark has never been extinguished.

What are they? Coins and gems.

Big whoop, you say. Treasure was how you kept score. Whatever. Get to the octorilla!

Don’t worry, the octorilla is en route. But these aren’t simple lists of conversion of 10 coppers to a silver piece. These are… well, here’s the coins. 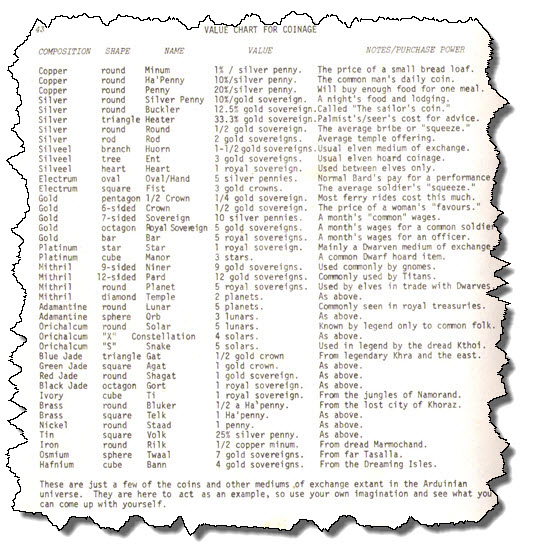 It Is An Intriguing Thought That Titans Have Their Own Currency. Titans Of Industry!

So, at a time when all treasure was, effectively, blank disks in three (later five) colors, this presented the idea of a world sprawling out before me, a world where elves had a currency for themselves and one they used when dealing with dwarves; a world where even copper came in three sizes; a world where coins could be stars of platinum or cubes of ivory. A world where such places as “legendary Khra” and “the Dreaming Isles” existed… somewhere. Where “the lost city of Koraz” traded, not in gold and silver, but in brass and tin.

I mean, c’mon! “The iron coins of dread Marmochand.” That sentence alone invokes wonder and awe and mystery, infects you with a desire to know more. Well, it infected me at any rate. This table make me think — still makes me think — about all sorts of things when I create worlds. It shows, in one page, how a world can, and should, sprawl from the most mundane — a tiny copper coin to buy a loaf of bread — to the most fantastic — orichalcum serpent coins used in legend by the Kthoi, who or whatever the Kthoi are or were. And that very lack of explanation is part of the appeal. The Arduin books presented an almost random collection of bits and pieces of Dave Hargrave’s imaginations. They’re like finding a collection of torn and random pages from some lost series of great novels, trying to piece together the whole story from the fragments you have at hand.

When you design a fantasy, or science fiction, world… consider the money used. Not just its value, but its look and feel. Money is, after all, a fairly important part of life. It has real power and symbolic significance.

On the facing page, gems. Again, I’d tended to think of gems as being, effectively, a low-weight way to carry a lot of coins, and saving every gold piece of weight — why, yes, the “gold piece” was a unit of weight, why do you ask? — was often critical, as you’d never know when the DM was going to spontaneously remember the encumbrance rules everyone ignored most of the time. As with coins, though, the Arduin tables opened my mind to a range of new possibilities. 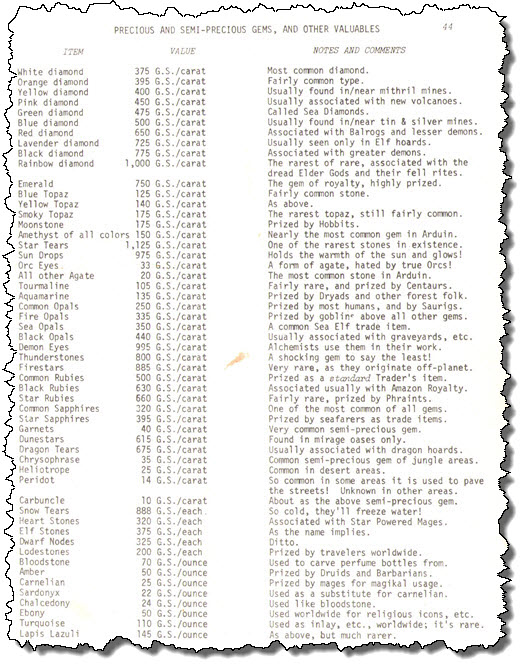 “And Did You See? Grughuk Of The Ninteenth Abyssal Plain Got Me This Black Diamond Engagement Ring!”

“Rainbow diamonds… associated with the dread Elder Gods and their foul rites”… how can one read this and not be inspired? “Elf stones… as the name implies”… erm… OK, you’ve kind of got me there. I’m not sure what the name implies, other than that “stones” is sometimes a euphemism for something I can’t imagine being used as a form of currency… probably. And “Dunestars, found in mirage oasis only”… are they illusionary gems? Or does the mirage somehow leave behind a real gem? Either way, it’s cool. What does a star tear look like? It’s never stated, but I’d envision something like an oval of perfectly transparent glass, which glows brightly with its own internal light. The “prized by” and “used by” notes are the sort of thing a canny player memorized to weasel out a bonus of some sort when forced, by dire circumstance, to negotiate instead of slaughter. Fortunately, that didn’t happen often.

Another page follows, including nine kinds of pearls, and many different kinds of coral and marble, and even more, all of which served to tell me how vast a world could be and how many kinds of things — even in the category of ‘colorful rocks’ — it could contain. Then we go on, further still, to “other valuables”… 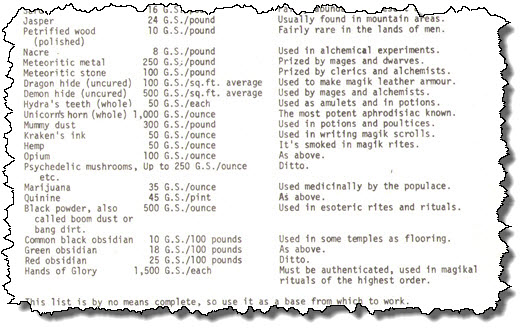 And Now You Know Why Unicorns Were Hunted To Extinction…

I am afraid I must note that there are, of course, no actual rules for how to use nacre in alchemical experiments, or what smoking hemp does for you in terms of “magik rites”, unless you’re performing an “Invoke Munchies” spell. But who cares? It’s still cool. I also have to love that “black powder” is used in “esoteric rites and rituals”, such as “the ritual of blowing the crap out of someone from a good ways away” and “the ritual of the DM and the player arguing about if their character knows how to make a gun just because the player does”.

This concludes the price and equipment section. Next time — mage spells, and the octorilla! I promise!