The Runes Of Doom, Part II

And The Black Wind

In today’s installment of the Arduin walkthrough, we look primarily at what is now called “downtime” events — that vague limbo between “Well, half of you will be rolling up new characters while the other half sell the loot they stripped from your still-warm corpses” and “You stand upon the threshold of the Dungeon Of Indescribable Torment And Certain Slow, Painful, Death… so, naturally, you head straight in without a moment’s thought.” As I ranted on extensively a few posts back, this was kind of a new and strange concept to the former wargamers, as no one ever thought to pack little lead camp followers in with their Napoleonic figures so the infantry wouldn’t be bored between engagements.

The Urgency Of Time

Really, I just have to post this “paragraph” verbatim, because nothing else could “convey” the perfect Hargravian nature of the writing. Here is Dave Hargrave in full-on “Listen up, you primitive screwheads!” mode, a style of writing often used by Gygax and others of the era (also in the brilliant Star Rovers, the first of my truly epic analysis projects… wow, five years ago… damn…)

Get Off Your Chubby Buns!

Oh, and I mentioned the Black Wind was statted out in Welcome To Skull Tower, but illustrated here? Here it is: 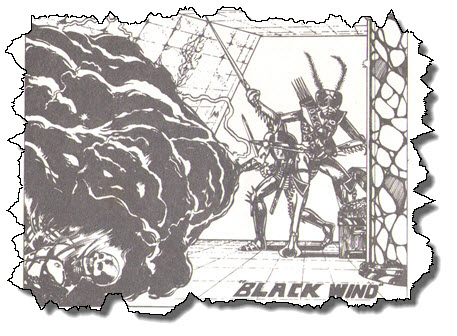 Too Many Oozes, Not Enough Clouds, That’s What’s Wrong With Modern Games

So, check this out. You’ve got a Phraint and a human in what looks like a starship corridor fighting a roiling cloud of smoke and lightning. With swords. By a treasure chest. As with the cover, nearly all that is awesomely cool about old-school gaming is conveyed in a single perfect image.

So what happens to the world while the players are resting on their chubby butts, their fingers stained orange from cheetoh consumption? There’s two charts. One determines the chance of something happening, the other determines what happens. Sort of.

Frankly, The Only Real Political Allignment(sic) Is “Amoral”.

One of the things that’s interesting, to me, is that the degree of dissatisfaction has no bearing on the severity of the intrigue… just the chance for it to occur. As for the intrigue itself, well… 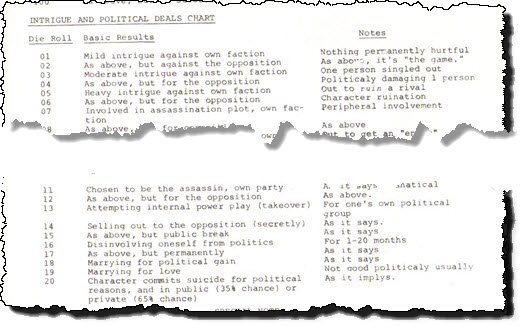 You have to love result 20.

DM:”OK, you commit suicide… (roll roll roll)… by sticking your wand of incineration down your throat and activating it in the public square.”
Player: “What? Why?”
DM: “Political reasons.”
Player: “But I’m dead! How does that help?”
DM: “Let the dice fall where they may. Moving on…”

I’ve Got Some Good News And Some Bad News…

Next up we have the good and bad event charts, which are rolled on once a month. There’s a 50/50 chance for either, but each must be rolled on at least three times a year. The charts are the usual mix of things. A sampling, and some notes:

I Admit To Curiosity As To What The “Etc” Can Be

It is later noted that these two charts are “generally used by Non Player Characters” in campaign style games, such as various sheriffs, lords, and retainers. This makes a certain sense, and it’s a way for the DM to get ideas to spark events in a long-term “Rulers & Rabble” style campaign, without seeming too biased or railroady. (I declare “railroady” a word, not to be confused with “rail roadie”, which would be a person of dubious hygiene and social standing who idolizes Amtrak conductors and follows them about. But I digress.) 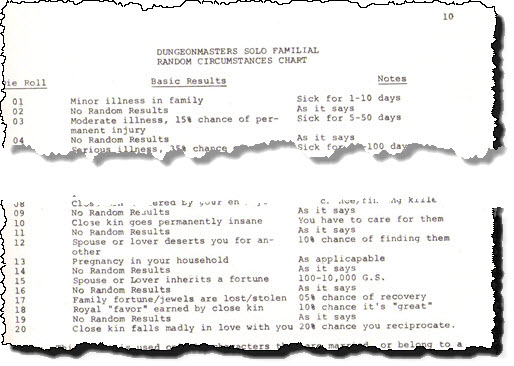 85% Chance If You’re A Lannister

See, folks? This is why PCs are murderhobos, rootless wanderers with no close kin or connections. Because if you have relatives and family, the GM will use them entirely as a way to completely screw you over, again and again and again, and if you whine, the GM will shrug in that annoying way GMs do, and say, “Sorry, dude, I was just rolling on the chart… so, have you set the date for your character and his sister to get married, yet? I’ve got them ‘psychopathic incest babies’ chart around here somewhere…”

A bit short, but I’ve got some other stuff to work on this week, and this is the end of the background material.. next time, we get into classes. Alchemists, assassins, and more.