Wow, I Am Really Dating Myself With That One

When last we spoke.. er.. wrote… well, I wrote, you read… anyway… in our prior installment, I promised a look at the Planes. I’ve always been a big fan of other dimensions and realms beyond, and as I’ve noted before, the Gygaxian pseudo-science style embodied in D&D and its relatives also strongly appeals to me. So, it will be interesting to see what the Book of the Dead has to offer, standing (metaphorically, actually, it’s lying flat on my desk) as it does between the wild-and-wooly age of the early Arduin supplements and the surge of professionalism (driven by new technologies and a maturing market) of the later 1980s.

First, per the book, there’s a lot of planes, and they are effectively numberless. They are “collectively known as the Nether Planes, the Abyss, the Great Beyond”, and it’s really unclear if these are three categories of planes or if those are some of the many names for “all the planes”. In addition, there’s an adventure woven into the background material. Paragraphs in italics are the adventure, and paragraphs not in italics are “general information”.

The easiest way to get to the Nether Planes (which evidently includes those realms where good creatures go, as opposed to their more traditional (in D&D) meaning of “place where you go to get XP when you’ve worked through the rest of the Monster Manual”) is to die. This may not be satisfying for the players, so, there is also the Gate of Worlds. Whatever the means of arrival, you start at the Plane of Shades.

Ironically, the Plane of Shades lacks shadows. It’s all just dull grey. You know what else it lacks? Your clothes! Hah! Yes, dead or alive, you arrive starkers. Fighters lack weapons and armor, clerics holy symbols, magic-users their material components. But you do have 1d6+6 gold coins, assuming you were buried with funerary offerings (or passed through the Gate of Worlds). (You don’t get all the loot you were buried with. You really can’t take it with you.)

Cloudy With a 26% Chance Of An Axe

Now we get weird. Weirder. You can create “at will” clothing and other items you are familiar with, but they are basically illusory and don’t do anything. However, “magickal and physical abilities operate here as the percentage of the character’s prime attribute (+10%)”.

Yeah, I read that a few times, too. Fortunately, there’s examples, because otherwise it makes no sense.

The given examples are a cleric casting a spell and a fighter “creating and wielding” a sword. It’s not clear if this is per ability or per use. The cleric has a 26% chance to cast “any spell they were accustomed to”. Does that mean you roll for each spell you want to cast, or roll to see if you get the “spellcasting” ability, and too bad if you blow it? For the fighter, is the weapon permanent or do you need to re-summon it for each fight (or each round?).

The chance increases by 2% per day. So if forced to make a ruling, I’d say that each day you get to roll to recover a specific power/ability, and if you succeed, you have it, and if you don’t, you try tomorrow. So the cleric either recovers spellcasting, or they don’t.

The plane is featureless except in one direction, where it’s a slightly lighter shade of grey. Heading that way brings you to a fog-shrouded river that extends infinitely either way, and whose opposite shore cannot be seen, so why you would assume it’s a river and not an ocean or a big lake is beyond me. But I digress.

You discover that what looked like a large tower in the distance is actually a small horn standing on-end, which you are supposed to blow on, per rules that appear later and we’ll cover them when we get there. A shadowy figure on a skiff appears, you pay them, you cross, yadda yadda. If you don’t have any money, you can try to swim, and if you drown, you re-appear on the shore and, I guess, can keep trying. I’d note it only costs one coin to cross and most people have 1d6+6, as stated above, so it shouldn’t be too hard to beg one. (A good scam would be to subtly imply your ‘generosity’ will be taken into account on the other side…)

Also note: If you die after you’re dead (since you can summon weapons and armor, and cast spells, you can kill each other), you just respawn and can resume your journey through the afterlife. Man, even in the 1985, things were getting “video gamey”. (There is even a centuries-long tournament going on in one realm, where two great knights constantly kill each other. FATALITY! FINISH HIM!)

Across the Styx (you, erm, did figure out that’s what the river was, right?) is Elysium, a realm of wooded hills, winding trails, and random encounters. You can run into a lot of different people here, including gangs of bullies that like to mug the newly-slain, sending them back to their starting zone. Wow, full loot PVP and naked respawn. It’s not just a video game, it’s an old-school MMORPG!

A major attraction in Elysium is the Ring of Fire, where country-western songs and Preparation H commercials play endlessly. A ring of lava surrounding a tall mountain, crossing it requires the use of some magical artifacts specified elsewhere, or, I suppose, any of dozens of spells which can transport people or make them immune to heat, as there’s no indication this won’t work and it’s kind of odd the designers (who regularly addressed such actions by players in other areas) didn’t consider that a river of lava would be minimally difficult to a typical adventuring party high enough level to go on this kind of quest.

Beyond the ring of fire, under the mountain, is a passage to Archeron. This plane appears as a series of canyons, containing caverns. On a roll of 1-2 on 1d8, you may encounter a miner, excavating for a mine. He has a 65% chance of being accompanied by his daughter. Roll 1d10 for her shoe size.

Some of the caverns lead to other planes; some are just caves.

Footprints On The Sands Of Time

The Acheron River flows through the canyon, dividing and subdividing, until it reaches a desert, which you can only cross using a horse with no name. Sorry. The desert is the Plane Of The Sands Of Time, which contains “all the memories of yesterday and visions of tomorrow”. Oh, gods, it’s the Plane Of Vaguely Inspirational Instagram Quotes! Nooooooo! 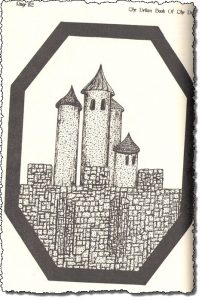 The City Of Towers. See, It’s A City, And There’s, Like, Towers.

The Planes Of The Sands Of Time is described as a “discontinent” region. Now, this is interesting. I was all about to make fun of them for making up words, which is never a cromulent thing to do, but I figured I’d save myself some embarrassment by googling to make sure it was made up. And, here’s the thing. From what I can tell, the word “discontinent” was coined in 2012 on Twitter: It means “When you feel your sadness is a vast place with its own topography, separate from all other land masses.” This fits very well with how the Plane Of The Sands Of Time is described. I find this delightful for some reason, possibly too little sleep or too much sugar or both. Thirty-ish years ago, someone types the wrong word in a forgotten gaming supplement, sixish years ago, someone independently stumbled on the same collection of syllables (I used to have this long list of typos I thought would make good words) and defines it poetically, and threeish minutes ago, I put the two together. So it goes.

(Damn, if it turns out the word has been in existence since 1841 or something, I’ll be irked. All that potential poetic synchronicity, lost, like tears in the rain.)

Then you go through an oasis and emerge in a fountain connecting to the City Of Towers. The walls are carved as “linked human figures”, which you can almost sorta kinda see in the image, but it’s not how I’d picture it, given the description. There are no gates. Climbing the wall causes the figures being climbed to animate as double-strength stone golems, with their fellows moving to block the gaps while they fight. There are exactly 303 of them, which is helpful if you’ve got the kind of players whose solution to the problem is to just keep killing stone golems.

Entering without killing 303 stone golems involves charming/controlling them in some fashion. Fortunately, the players should have acquired a series of magical horns in the course of getting this far, which permit doing just that. I haven’t bothered telling you about the horns, because I wanted to focus on the planes and not the adventure. Serves me right, because now I have to mention them. Which I have. Before moving on, though, I need to note that the towers are also stone golems, so, unless your want to experience a typical early-2000s MMORPG-style grind where you just kill the same monster over and over and over in the hopes of getting that one rare drop (or an achievement) , you will use the Plot Coupons… I mean, the horns… or hope someone has “Charm Monster” memorized. (I am not sure if 1e-era golems could be charmed or not… they were, IIRC, immune to most magic. Sure, I could look it up quickly… my AD&D books are about a foot away. But I’ve had too many distractions already. So, onwards!)

After all that, the only thing described within the city of towers is a spiral staircase that seemingly ends 60′ up. If you climb it, you emerge into a “moist, green land”, and the staircase is now the top of a well, and going back down puts you somewhere else. Color me very disappointed. A “city of towers” that’s actually “a city of stone golems where the only POI is a staircase to another plane”. Not impressed.

Traipsing through this new plane eventually leads you to another desert (with any luck, maybe my now, you’ve named the horse?), where you will encounter a low metallic wall, enclosing an area a few hundred feet in diameter. Inside the circle, it’s clear the wall slopes inwards below the sand, and you are actually standing in the bell of yet another horn. Clearing the sand (assorted magical means are possible) causes the horn to shrink, and then everything falls downwards into the plane of the Shilii.

I’d kind of hoped to finish with this part, but there’s a good bit to go, so it will wait until I write the next part. Coming up: The Plane of Shilii, Butch Cassidy and Emma Peel (yes, really), and more!