Also, Save Vs. Save Vs. Petrification

Sorry for missing last week… a lot of chores that had to be done pretty much devoured my writing time. Anyway, here we all are, still working through the information-dense chunk of Skull Tower. In the unlikely event you somehow ended up on this page accidently, possibly because I’m going to write “Bernie Sanders has sex with Kardashians at Mizzou” and see if that raises my google rank, the rest of the articles in the series are here. No Kardashians, but many other creatures of unearthly horror. (No Bernie Sanders, either, but we do discuss fantasy economics. You see what I did there? Gads, I’m witty.)

The Road Goes Ever, Ever, On, And Is Filled With Random Encounters

Now, following an odd hodge-podge of notes, thoughts, and hints, we get to travel times. Why not? 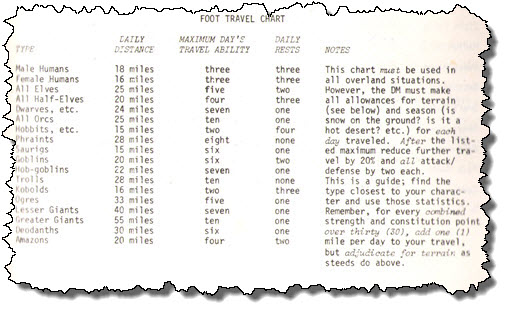 Man, It Must Have Taken Sam And Frodo Forever To Get To Mordor

There’s quite a few notes above the chart:

And some notes from me:

Next is a discussion on inter-city coach lines, with their rates and travel times. It’s one of those little bits, of which there are many scattered in the Trilogy, that make you stop and think about the nature of day-to-day life in your world, and remind you that the campaign setting doesn’t, or shouldn’t, consist entirely of The Town (containing the The Blacksmith, The Temple, and The Inn) and The Dungeon.

Then, horses, and other riding beasts, a chart cross-indexing type (including camel and ox) with five grades (six, if you count the assumed ‘average’) to yield a travel time, which will then be adjusted by terrain.

Following this is an “Escape and Evasion” chart, cross indexing the level of the pursuer with the terrain type to yield a base chance to flee successfully. This is a good abstraction of what’s often a difficult thing to model in RPGs. The footnote on the chart reminds the DM to consider elven cloaks, boots of speed, and the like, but — for the thousandth time — the lack of any kind of unified mechanic comes around again. The GM will basically be plucking percentages out of thin air for each possible adjusting factor — and whether hunter or hunted, the players will undeniably be looking for such factors (those in their favor, of course.)

The next item is a saving roll chart for “all stoning of the glance or gaze variety”, based on both the level of the character making the save, and the distance from the gazing or glancing (is there a difference?) creature. Oh, wait. This isn’t the saving roll vs. stoning chart. This is the saving roll vs. saving roll vs. petrification chart. Seriously. If you fail your roll on this chart, then you need to roll your normal saving throw. Otherwise, you avoid the gaze. Me, I assumed the saving throw, at least in part, modeled “not looking at the damn thing in the first place”, but some people wanted more detail.

The next part of the book — most of the remainder, in fact — is material about the setting itself. It’s tremendously inspirational and shaped, and continues to shape, a lot of my worldbuilding. So expect a lot of fawning mixed in with the inevitable sarcasm. (Everything I do is sarcastic. If I met God Himself, I’d probably start off with “Great job on the platypus, there. You outsourced that one, didn’t you?” (Well, I mean, I’d start off with that after recovering from having to adjust my atheism.)) 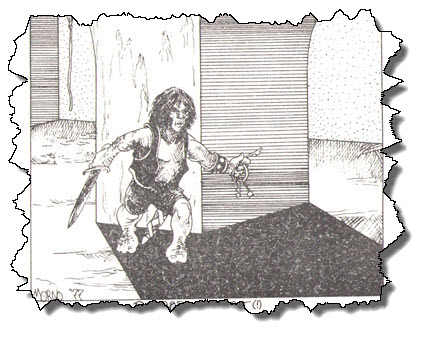