Like Magic Items And Monsters, You Can Never Have Too Many, Right?

(Note That I Didn’t Make Some Kind Of ‘You Got No Class’ Joke. Clearly, I’m Aiming Higher Now.)

OK! After an excessive series of digressions to Princeton, we return to another land of strange and terrible monstrosities, Arduin. The full series of these articles, for those who care (and why would you?) are on this convenient page. Today, we are (finally!) going to take a look at classes in Arduin.

In the early days of D&D, classes were pretty much the only delivery mechanism for character mechanics, and there were few, if any, concepts of ‘swapping out’ one ability for another within the same class. Thus, if you wanted a character to have some power, ability, gift , etc., the primary way to do it was with a new class… and, damn, there was an explosion of them at the time, esp. after the original Greyhawk supplement provided an example of how the system could be expanded. The pushback that “not everyone has a class” was to come later, and was never fully successful: D&D has always appealed to people, like me, who think the universe would be a much better place if everything could be categorized, numbered, measured, and labeled. It’s not enough to know that Fred is a candlemaker; we must know he is a 3rd level candlemaker with the ‘Wax Miser’ feat and a +2 competence bonus to wick cutting.

And, speaking of merchants…

As I noted in my PrinceCon III digressions, one of the hallmarks of this early era was a high level of personalness (a perfectly cromulent word, whatever my spell checker thinks). So it’s not just a “Trader”, but “Hargrave’s Trader”. I suspect, at the time, that there were a lot of people creating merchant-type classes, because the following occurred very, very, often:

DM: OK, the merchant says, “That’ll be three copper pieces.” He holds out his hand.

Player: I stab him!

DM: Why? You’ve got like a zillion GP in your Bag Of Infinite Space! I can’t believe I let you get that, by the way…

Player: Hey, I worked hard for that bag! Two orders of General Tso’s chicken! Anyway, I’m stabbing him ’cause he’s there. 1Do I kill him?

DM: (Flipping through the tiny thin pamphlets that were all we had, back in the day, and we walked 20 miles to the game store to buy polyhedrons carved from stale cheddar, and we liked it!): Uh… I dunno… it doesn’t really say how many hit points a merchant has or what their AC is… and this guy is like a guildmaster blacksmith, he ought to be tougher than an apprentice baker… it doesn’t make sense they’d be the same… hang on, I’ve got a three ring binder and I’m not afraid to use it! (Emerges three weeks later, bleary-eyed, with two hundred pages of rules for merchants, including a set of economic simulation tables so complex, he started to write programs on his college’s VAX to automate them, and, eventually, turned them into EVE Online. But I digress.)

(And for anyone who wants to claim this isn’t how it was (despite not actually being born at the time… you know who you are) let me say, under oath, that a)I was that player, and b)I was… still am… that DM. Not at the same time, of course. To play D&D, you needed other people, the first time in my life up to that point I actually needed other people to do something I enjoyed. (I hadn’t yet discovered sex… though, counter to myth, it was D&D that led me to that, too.) Without D&D, I would never have felt a need to develop what social skills I have, and if you think I’m utterly lacking in social graces now, imagine me without 35 years of practice blending in with humans.) 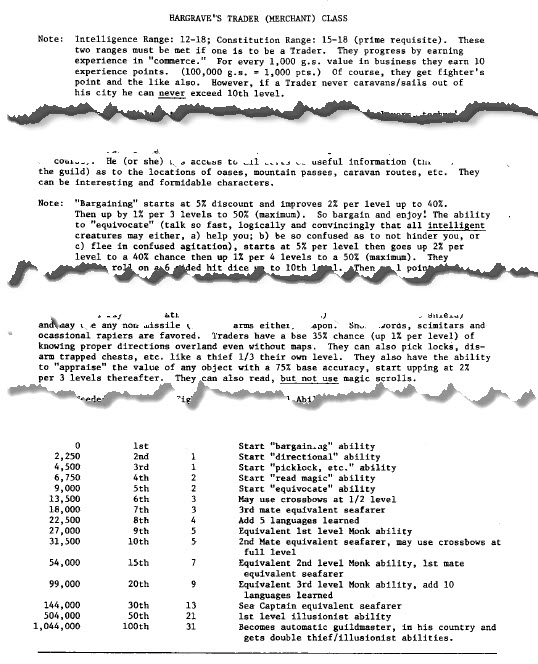 Ooohhh, I can’t wait to get my first level illusionist powers!

Let’s look at some highlights:

Eldritch Wizardry came out in 1976, and its parents were perfectly fine with that. The edition of the Arduin Grimoire I have is dated 1977, but refers to an earlier printing “about a year ago”.. I have never seen that one. So it’s hard to say if the Psychic class predates the psionic rules introduced in EW. It’s certainly a different spin on them, that’s for sure… hell, it’s a class, not a “roll at character creation to see if you’re a campaign-destroying demigod or not”. 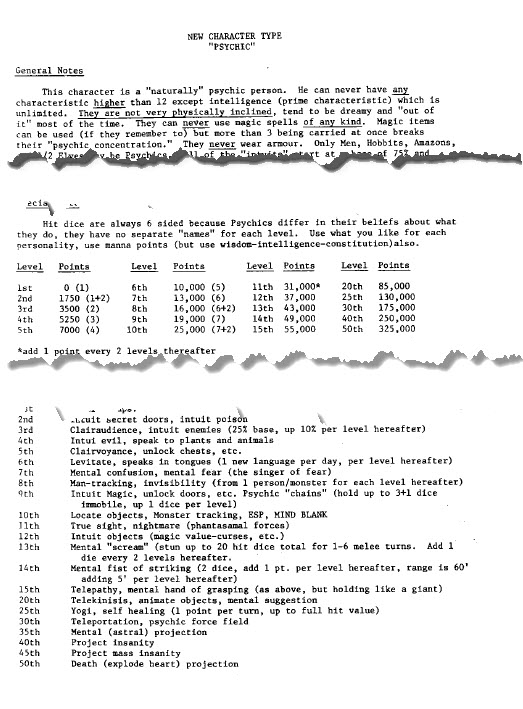 At 25th level, you become smarter than the average bear.

The creation of a Barbarian class was as inevitable as the creation of a Merchant class. It’s “Conan the Barbarian” after all, not “Conan The Fighting-Man Who Acts Really Grumpy”. (Although, barbarian-wise, Arduin is a lot closer to Thundarr than Conan, albeit many years early. And lest anyone be confused, “More Thundarr than Conan” is totally awesome and ought to be emulated and admired, now and for all time! Just so we’re clear where I stand on this.) 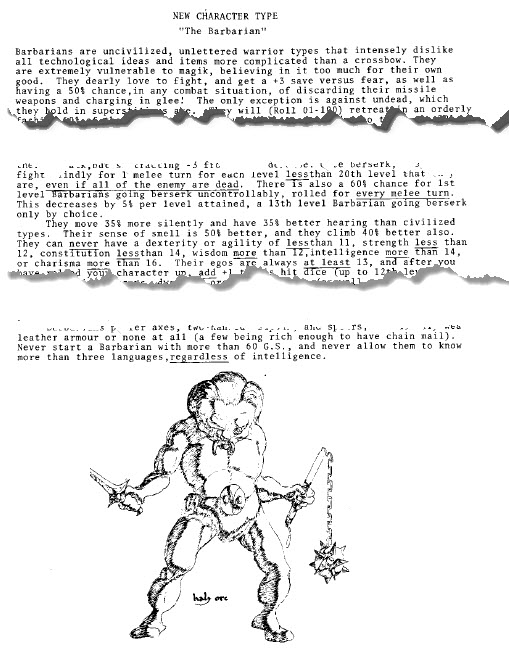