Now, we get to another cool innovation, presented with minimal mechanical guidance and an utter disregard for the hobgoblin of ‘game balance’. Reading through the Arduin Grimoire with an eye for detail now, decades after I first used it in play, I notice something never made explicit: Exactly how to use the Special Ability charts. We just rolled once on them when a character was created, no muss, no fuss. I don’t see a logical alternative, really… this was an era when characters were heavily front-loaded, with most abilities gained at creation or from class levels. None of this “gain a feat every three levels” stuff. Still, it strikes my older self as odd that it was never stated outright. A lot of stuff from this era was like that: You were just supposed to know. It was accessed through the Akashic memory of the RPG collective hivemind, or something. And, yet… somehow… we did know. We made up rules and then forgot we made them up, convincing ourselves we’d read them in some book, somewhere.

There’s several pages of them, all in a 1-100 chart, all with very little explanation or detail. When I usually end up making anything but the simplest feat eat up 150-250 words, the brevity of these is quite impressive… as is the highly variable utility. I’ll post the full scan of one of them for a sample, then go through the rest and highlight some things. 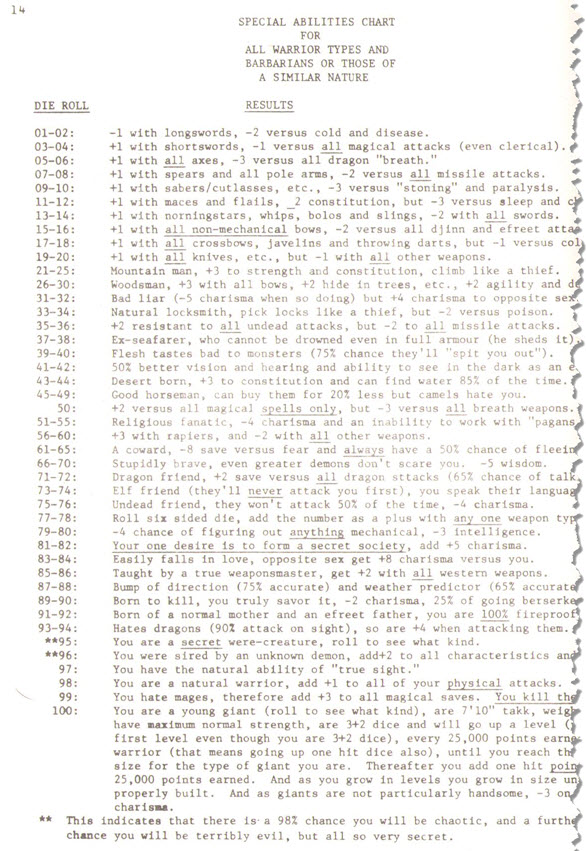 +1 With Maces, Or Lycanthrope?

The options range from generally negative, to mildly interesting, to character-killing (A fighter-type with a -8 save vs. fear and a 50% chance of fleeing?) to just asking for trouble (secret were-creature?).

Actually, I don’t think alchemists are even in this book…

The next table is “Mages, Illusionist, Druids, Alchemists, Medicine Men, Psychics and Those Of Magical Natures”. Interesting, compared to later evolution of gaming cliches, that Druids are lumped with magic-users and not clerics.

Home of the singing evangelist!

Next, we have “Clerics of all types, bards, singers, witch hunters, pallidins(sic semper tyrannis), and all of a more religious than magical nature”. Another case where we see modern concepts in a state of flux — bards are “religious”, rather than arcane (well, given that the original bard needed to be a Druid first, this kind of makes sense… erm, but Druids are “magical” in this book… so, uhm, whatever. I’m not sure what the difference between a “Bard” and a “Singer” is, to be honest. I think there’s a “Rune Singer” class in one of the later books, though.

Anyway, let’s look at the chart:

Aragorn and Bilbo roll on the same chart, it seems.

Next up: Special Ability chart for (deep breath here) thieves, monks, ninja, highwaymen, corsairs, assassins, traders, slavers, rangers, and all those with a more or less “secret” nature. (Fred the candlemaker is looking around at Slyfingers the thief, Dragon Fist the monk, Black Bart the corsair, and Aradorn the ranger and wondering how he ended up here.)

For everyone who isn’t DPS, Tank, or Healer, I guess…

“A techno, a sage, and a courtesan walk into a bar…”

Here we are at the last table, which covers Technos, Sages, Courtesans, Normals, and everyone else.

Player: So, I find some edible plants.
DM: The hell you do. You’re in the Barren Desert Of Barren Bleakness. There are no plants here.
Player: I always find edible plants!
DM: That means, if you’re somewhere where there’s, y’know, plants!
Player: It says always!

Modern games, with their ‘cohesive rules’ and ‘integrated systems’ and ‘internal consistency’ and ‘extensive DM advice’ have totally destroyed the true spirit of gaming.

After this table is a “Special Note” which, I presume, applies to the whole section: “These characteristics are only guidelines, but if you accept the responsibility and roll for them, then you must accept the results as a permanent part of your character thereafter.”

At long last, classes! (Or some portion thereof… we’ve got Traders, Psychics, Rune Weavers, Technos (Sorry, “Techno’s”), Barbarians (waaaaay before Unearthed Arcana!), Medicine Men, and Witch Hunters to cover, and I don’t have a whole lot of time to write each week. Hey, I’ve been regularly posting content at least weekly for three weeks now…