I try to update this at least once a month, in order to present the illusion I’m doing stuff. The problem is, I am doing stuff, but it’s mostly not stuff for this. Lately, I’ve been doing random worldbuilding for a GURPS game I’ll never run, and also, writing up Earth Delta PF2, which after many long delays and fits and starts is coming together.

However, it’s still a good ways from even an Alpha Test. Getting better, but not there yet.

But I feel I should post something here, so, in a fit of extreme laziness, I exported the current unfit-for-public-consumption draft to PDF, and then screencapped a couple of pages to give a feel for what’s going on. Please note there’s typos, game balance/design issues, contradictions, confusions, more typos, poor editing, and so on. This is all first-draft stuff, most of which has barely been skimmed since being typed initially.

A few backgrounds. A lot of the standard PF ones work, too. 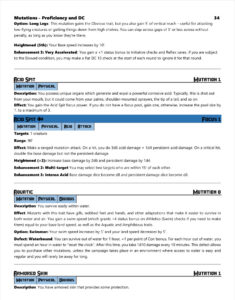 A small section of the mutations. Still doing a lot of balancing and second guessing. 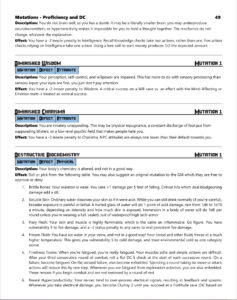 It’s not a shameless Gamma World clone without defects!

The fact this is the class I’ve put the most work into, and it’s this incomplete, is telling. It’s still too close to Wizard, but getting better. A little.

Some of the feats for the Scholar class, which is sort of like if the 4e Warlord class fell in love with the PF2 Alchemist class and had a very weird baby. 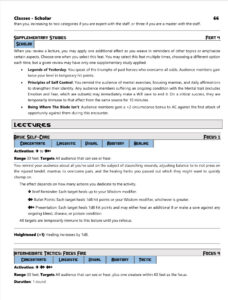 A very, very weird baby. This is the primary in-combat mass-heal mechanic so far. 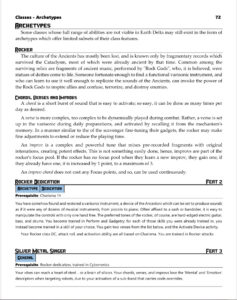 This is the only Archetype so far, and it’s a little unfinished and unbalanced, but I love the concept. 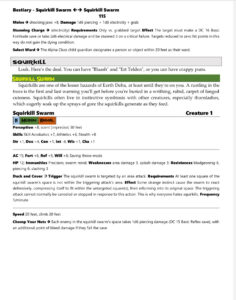 One thing that will never change is my preference for pun-based monster names. 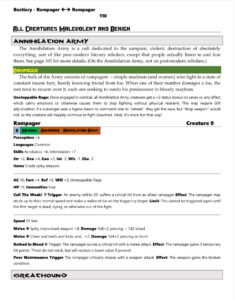 The fluff text of monsters from the 4e version of Earth Delta carries over easily; the stats need a lot of change. 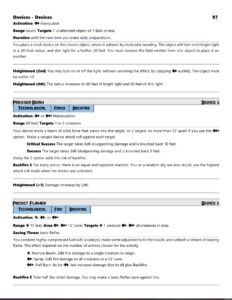 “Devices” are, basically, Scavenger “spells”. I am trying to make them more mechanically distinct and reflect that they may be sufficiently advanced, but they aren’t actually magic. 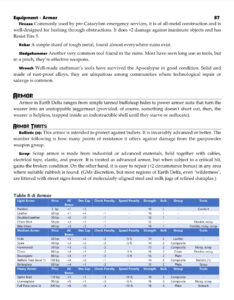 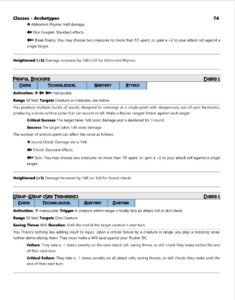 Womp womp! You might note that when I have multi-action versions of abilities, I try to give each level a unique name. I spend way more time on this than I should.