It’s a Leech! With a Laser!

So, thanks to my awareness of my own inability to hold a thought in my head for longer than a few seconds, I give you… the astounding laser leech! A low level monster fit for Gamma World, Pathfinder 2, my own Earth Delta PF2 edition (if it ever gets finished), or AD&D 1e.

Mutated cousins of the more common giant leech, these odd creatures are found in swamps contaminated by radiation and toxic runoff from crashed spaceships or similar anachronistic ruins, which are surprisingly common[1]. (Some sages hold they are not mutated giant leeches, but are natives of someplace distant in time and/or space, brought here by said spaceships. The debate is fierce, and the Riverwall Collegeium’s Hirudinea Symposium was tragically ended when rival factions accidentally(?) unleashed their collections upon each other, and the audience.)

Either way, at rest, they greatly resemble the giant leech, save for a dull reddish glow emanating from a vein-like patterning on their skin. Rarely, though, are they seen in this torporific [2] state, as they are instantly aroused by the presence of potential prey. They then take to the air, despite lacking wings or gas bladders or any other identifiable form of lift, and move in to attack.

Their primary attack is that which gives them their name — a beam of energy that shoots from their mouths, drilling into their prey, with a 10″ range. Rather  than cauterizing the wound, though, the beam actually causes blood to burst forth and travel back along it, allowing the laser leech to feed from a distance.[3] They will drain 1-2 points of blood each round, including the initial attack. The drain ends when the victim is dead, moves out of range of the leech, or the leech is damaged by an attack. The leech cannot attack another target while feeding. (The beam damages things that don’t bleed, such as golems or elementals, but it can’t drain them.)

While not intelligent, laser leeches do have good hunting instincts and a cooperative pack mentality. They will usually position themselves around potential victims, so a target fleeing one leech will end up closer to another, so that many can feed as the creature frantically runs to get away.

[1] Anyone who thinks Old-School games were all bent copper pieces and fantasy fucking Vietnam wasn’t there. From the Temple of the Frog to the Barrier Peaks to the Galactic Dragon, space opera sci-fi was always part of the game. FFS, the original Brown Box said to consider robots and androids as monsters, and had a Desert (Mars) random encounter table.

[3] “Psychokinetic Blood Transfer Beam Leeches” doesn’t really roll off the tongue, does it?

Lasleeshs are 3-foot long mutant leeches with a form of telekinetic flight. They attack with a laser-like energy beam (10 meter range, 2d6 damage) which is actually a kind of psychokinetic funnel that draws blood from the victim into the leech, feeding it.  As long as the leech is within range of the victim, it will do an additional 1d6 damage without needing another attack. (It cannot attack another target while feeding.) It will stop feeding if it is damaged and turn its attention to its attacker, instead.

Laser leeches may be the result of contamination from technological sources, such as those found in the areas surrounding Torch, or simply odd alchemical experimentation. Some believe they are from a distant world, while others hold they are extraplanar, although there is no hint of magical energy of any type in their bodies.

They are typically found in the same swamps and mires where normal and landbound giant leeches are located, lurking in the murky water until prey approaches. Their preferred attack is to leap up from the muck so as to surround the target at about 20 feet, forcing their meal to run towards one to get away from another. The drained corpse then becomes food for any number of scavenger swamp dwellers.

Lizardfolk sometimes maintain pens of these beasts as guard animals; the leeches prefer warm-blooded meals, and while simple minded, can be trained well enough to only target non-lizardfolk. They are kept fed with warm-blooded animals captured alive, or with prisoners when available. (The laser leech will feed off any creature with blood, but it tends to ignore cold-blooded ones unless quite hungry. If a party of adventurers includes cold-blooded (or bloodless) characters, they will not be targeted if there are yummier options on the menu.)

Speed 5 feet; flying 35 feet
Ranged [[1]] blood laser +12 (40 feet), Damage 1d10+6 + blood drain + sanguine revitalization
Blood Drain [[1]] Requirements The target is within range, is not resistant/immune to bleed, and the laser leech has not dropped the beam; Effect The laser leech draws blood along its beam. The target takes 2d4+2 damage and is drained 1 until it is given any kind of healing. The laser leech drops the beam if the target is out of range, or if it takes damage from an attack.

The pretty version.  I noticed it has the wrong range for the ranged attack; the 40 foot range is correct. Also, I just noticed there was  a loophole in Blood Drain — it doesn’t work if the target has no blood, such as a robot or golem. That’s been added, too. (Remember, folks, our motto is “Free, and worth it!”) 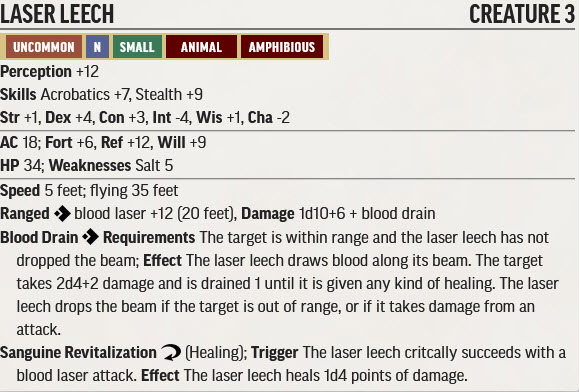