So probably not going to make 31. Ah well. Thirty posts in one month is still really impressive, that’s more than the past two years, probably. For this final post, I’m going to see if Earth Delta (Pathfinder 2 edition), my own vanity project, has enough pieces to build one character. Probably yes, if I’m being very narrow in my choices. (Don’t have a word on robots or plants yet, and only have one setting-specific class really started, and even that’s maybe 15%. But this exercise will highlight other missing chunks for me, so, let’s get on with it!

Also, please note the Rot-Weiler and the Painguin, which also are sort of “sneak peeks” at Earth Delta PF2.

Mutations:
Enhanced Intelligence, +2 Int, can Recall Knowledge as a Free Action for any trained skill, 1/round.
Telekinetic Flight (see below) from Mutate(Psion) Ancestry.

Feats:
Read As Human (Mutate Ancestry): Robots and other systems see me as human for reaction purposes.
Hobnobber (Background)
Disrupt Technology (Class) (And it’s the only 1st level class feat, which isn’t good, so that’s precisely the sort of hole I hoped to find!)

Class Abilities
Class DC: 17 (10 +3 +4)
Omni-Weapon: +7 ranged or touch attack, or DC 17 save, type of weapon determined during daily prep.
Spare Parts: Can use Reboot ability to restore an expended device 1/day.
Specialty: Energetics (see below)
Gimmicks: Barrier Bracelet, Micromessenger Drone, Utility Belt, Wire Trap (and that’s almost all, need at least 2x as many, so, another hole)
Devices: Pocket Flamer, Subliminal Subsonics (I actually have a good number of those for level 1)

So, like most pre-alphas, it works if you do everything exactly right and don’t try to step even an inch away from what the devs told you worked.

Obviously, Scavenger is currently 90% reskinned wizard; I hope to get it to more like 75%. One of the changes is that nearly all devices can be activated as 1-3 actions, with varying effects, and the 3-action version has some risk of backfire, which can be fun. If you’re the GM.

Below, a few of the things referenced. As this is pre-alpha, not only are they deeply subject to change, but they’re probably full of typos and bad game design. (“So, just like your finished releases, huh?” “Shut up.”) 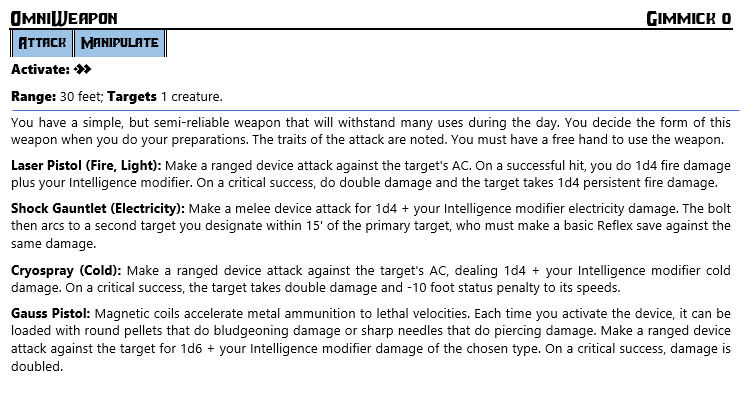 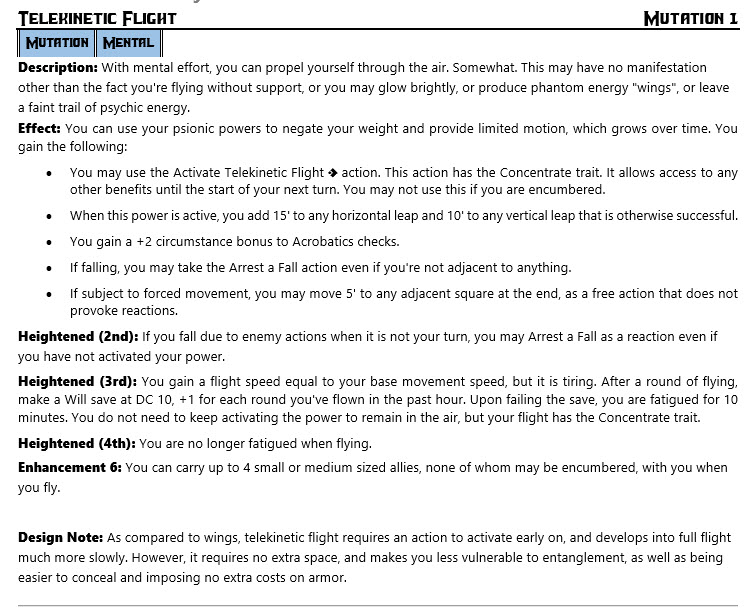 Not related to this character, just something I was working on today. One of the advantages of doing your own stuff is that you can make all the horrible puns you want and editors don’t complain.