The Return of Biff Muntz

As you may recall, far longer ago than I’d like, I posted Part I of this review and walkthrough,  in which I began generating a character for the RPG “Alma Mater”, published in 1982 by Oracle Games, and best known for its Erol Otus art and serious political incorrectness. Today, we continue with the process of character generation. I had just named my character Biff Muntz, and we were about to see if he had any skills with which he could pay the bills… or, being a bully, get the money to pay the bills from someone else.

As a “Tough”, Biff begins with Dirty Fighting, Driving, Drinking or Drug Use, Intimidation, and any one other skill. Well, first, we’ll go with “Drinking”. Skills in Alma Mater come in levels, and if you have a skill, you start at Level 1 (all other skills begin at level 0). For each level in Drinking, Biff can add (or, optionally, subtract) 1 from his Con when drinking. This also gives me a chance to spike someone’s drink without them knowing about it (a bonus of +1 against their Intelligence, so, 1d10+1 against my target’s Int. Hopefully, Cheerleaders have a low Int.) The more drunk I get, the more my skill in drinking increases; this is one reason to use the skill to lower your effective Con… it makes you get drunk faster and thus get more SP to drink.

There’s a lot of good options for other skills, many of which fit with Biff’s personality: Brewing (to make your own hooch), Illegal Economics (buying and selling illegal items), Coolness (to not show fear), Crudeness (as exemplified by the late, great, John Belushi in Animal House, this is the ability to be so disgusting people are actually revulsed… you know, a College version of AM would be pretty easy to create, especially one which focused on the classic “boobs and beers” films of the late 1970s/early 1980s. Revenge Of The Nerds: The RPG!. But I digress.), Lying, Weapons Knowledge, Forgery… this is a great skill list! But I get to pick one, and only one… hmm…

It’s interesting. Since most of your skills are pre-selected, this choice really matters; it’s one of the most defining elements of your character. To drift even more off-topic for a moment, I believe that whatever aspects of your character really matter ought to have mechanical representation. There’s some who say this is the antithesis of role playing; I disagree completely. If your character is shy, or flirtatious, or drinks heavily, or likes to ride motorcycles, or whatever, there ought to be a codified representation of it in the rules set. So, with that in mind, and looking at the skills, I think Biff is going to pick Coolness for his free skill. Why? Because the higher your Coolness, the better you are at picking up girls. At Level 2 Coolness, for example, you don’t need to roll to ask someone for a date. Biff is starting at level 1, of course, so he’ll need to roll his Courage (CR) to ask a chick out. His CR is 9 and he’ll get a +1 from this skill.

Learning new skills is hard. First, you can only have a maximum of 8 skills. Second, you can’t just gain skills through play, though you can improve them. You only get to check for new skills each September, and you need to roll against your LD (Learning Drive), of which Biff has virtually none. So, barring exceptional luck, Biff will just get better at what he already knows, which is pretty realistic. Biff is likely to end his life as a meth addict living in a trailer park, trying to avoid paying child support and watching the nerds he beat up become internet millionaires. Sucks to be you, Biff.

Now, if someone were to make a game on this theme today, it would be some weird Forgey thing with two-inch wide margins on half-size paper, and all the rules would be things like “Contrast your Angst to the opponent’s Pathos and then write a poem that doesn’t rhyme to describe your feelings and everyone involved reaches a consensus evaluation based on how many Trauma points you wagered in the Drama.” Let’s just say… Alma Mater isn’t like that. It’s a true old school game, and, contrary to what the revisionists would like to claim, that means rules. Oodles of rules. And charts. And tables. And, let me just say this… they are wonderful.

Here, for example, is the table of modifiers for dating:

If I'd hard this in High School, it would have been very useful.

You see all those numbers? You get to cross-index everything and work out all the details. The letters on the top, by the way, mean “Dance”, “Flirt”, “Date Request”, “Date Success”, “Seduction”, and “Love”.  Of course, you need to track things like successful or unsuccessful Flirt attempts, and your chances of going steady (which means you don’t need to roll to request a date, but you do need to roll for date success), are based on tracking a large assortment of modifiers, including your successful dates.

Seduction can’t even be attempted unless you roll against CR-1 (Coolness helps here, heh heh), and s the chance is your (INT+APP)/2, minus the target’s WP if they’re “passively resisting”.  Attempting to seduce a character who is “actively resisting”, the rules helpfully remind us, is also known as “rape”. (If both characters are willing, no seduction roll is needed, but both must roll against CR-1.)

There’s oodles of other rules, too. Rules for throwing a party, rules for drugs… hell, for those interested, here’s what drugs were going for in 1982. (Because I was a total nerd in High School, and still am, I can’t vouch for the quality of research of these rules.). 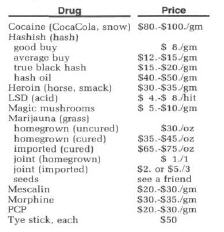 If you somehow got here while googling for useful information on the cost of illegal drugs in 1982, I feel sorry for you.

It’s a bit of a nostalgia trip, in a way… no meth, no crack, and PCP was still being used by some people. (That was the terror drug of our era, and, like most such things, the problem was pretty much self-correcting; any drug horrible enough that it might actually be as scary as the usual suspects claim will quickly eliminate its users from the gene pool, which also eliminates the pushers. Much like a virus, if it’s too deadly, it eliminates itself. The biggest risk is all the stupid kids who, knowing adults lie about marijuana, assume they are also lying about the things that really can fuck you up for life, or just end your life.)

The rules, charts, and tables just go on and on, and it would be impossible for me to point out every cool thing there is, from an extensive weapons list that provides modifiers for everything from erasers to meathooks to blowtorches(!?), to the random items you could find on people you beat up (divided by class, so you could roll on the Brain Equipment Chart to see what you took from the local nerd, and so on), to the many fine illustrations, such as this one, for combat: 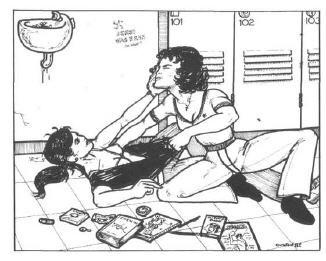 This Is What Illustrates "Combat" in Alma Mater. Elmore, Eat Your Heart Out.

Well, that’s sort of it, really. The bulk of the game is post char-gen, as it really should be. There’s only a handful of real decision points, again typical of the 1970s and early 1980s. For the most part, your character tended to evolve solely after play, with games like Traveller or Chivalry&Sorcery being notable exceptions. Many games, such as Metamorphosis Alpha, had only one or two decision points to make; everything else was either mandated or random. I think that’s it’s indicative of the time that we’d say “I’m going to roll up a dwarf fighter”, even though we mostly couldn’t control what we got; basically, without rules to let us decide what to play, we either cheated outright or we just kept rolling up one character after another until we got what we wanted.

Sadly, there are no rules for playing RPGs within Alma Mater; the possibility of infinite recursion would have been wonderful.