The Handbook of Traps And Tricks

So It’s Not The Dragon Tree Book of Tricks And Traps, Which Is What I Kept Thinking It Was

(And That’s Why The “Mandela Effect” Is Bullshit, Because Human Memory Is Crap And That’s All There Is To It.) 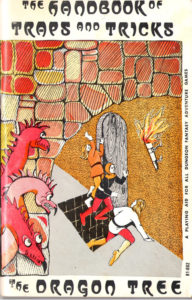 So, with multiple projects I’m supposed to be working on, naturally, I turn to something else, because self-destructive behavior is hard-wired to my brain. In this case, I turn to my dwindling pile of as-yet-unreviewed archaic gaming supplements, and pluck off the The Handbook Of Traps And Tricks. Oy!

Unlike my other Dragon Tree Press books, the Spell Book and the Delian Book of the Dead, this is an early-80s printing (third printing, if it matters), and in remarkably good condition. (Oh, I repeat my request for any reasonably-priced copies of the earlier edition of the Spell Book.) Shiny cover. Staples firm. No excessive wear and tear. Things is, I can’t for the life of me recall where or when I got it. It was well after publication, as if it were part of my gaming stock when I was in my mid-teens, I’d have used it and remembered it. I know I’ve had it for a long time, probably more than 10 years. There’s no indication of which store/dealer room it came from. Not really relevant, just odd. I usually have a vague idea where things entered my possession. In any event, I clearly haven’t looked at it much, or I would have remembered one of the more distinctive aspects… almost all of the interior text is in ALL CAPS. There’s some quotes and captions in mixed case, so whatever printer they used possessed a full set of moveable type. Thus, their typographic choice remains a mystery to be pondered unto the end of time, and beyond. Or, like, until about another two sentences, when we’ll have all forgotten about it.

There is something of a framing sequence wherein it is described this book is based on the notes of one “Master Engineer Humphrey Tappercoom”, whose philosophy disdains “instant death traps”, but instead prefers to find ways to wear down intruders. In terms of game design, this is a particularly modern idea, so it’s interesting to see it expressed so early. This was an era when monsters whose breath could kill you not just merely dead, but really most sincerely dead, to the point where ten simulcast wishes would be needed to revive you, were par for the course.

(I shall note that “This book is based on some in-universe book” is a common trope in Dragon Tree Press supplements, often involving oblique or not-so-oblique references to assorted historical figures. )

We also have rules/suggestions/notes for:

…And What To Do

Each of the traps (we’ll get to them soon, I’m sure) is described in a standard format. In another departure from the era, the meaning of the format is well described, almost as if the writers guessed the people reading this might not be in their small circle of players. Weird! I’m kind of freaking out, here. You know, there’s people, and by ‘people’, I mean, ‘nut jobs’, who try to scan Google indices of historical data for anachronistic terms, like “‘So, I instragrammed my selfie and got shaded for it by some rando’, quipped Dorothy Parker at the Algonquin”, published in the May 1921 New Yorker. But I’m starting to see their point…

Time: How long the trap is expected to occupy the players, not their characters. A very unique concept, and one welcome to DMs who need to pad out 15 minutes of prep time into a three hour game session. Er, I’ve heard there are DMs like that. I don’t know any, of course.

Numb: Sadly, not how many rounds until the ceaseless parade of horrors turns the PCs into catatonic wrecks. This is the number of characters affected.

Place: Where the trap is. In the floor, on the ceiling, in the social construction of expected norms so as to convince you that the dominant cultural paradigm is not only acceptable but inevitable and desirable thereby dulling your will to resist, or along the walls.

Funct: The purpose of the trap, in-game and/or metagame, also ConvertToCelsius(DegreesF: float): float;

Miss: The chance of the trap not firing or otherwise being ignored. The way it’s described seems sort of abstract; we’ll see what it looks like in practice. Also, a running gag.

Escape: “What is ‘A thing you can’t do from these lame attempts at humorous commentary’, Alex?” The chance of a mid-level character escaping “adverse consequences” if they know the trap is there and take “appropriate action”.

As usual, I’ll be paging through the book and picking out whatever I happen to find interesting at the moment. If a dozen duplicates of me were to write this article, each starting at a different time over a period of several days, I’d guess we’d overlap about 50% in which items struck our mercurial fancy. I am a creature of whim and whimsy, says the man who gets flustered if he can’t find “the shirt I always wear to work on Friday”. 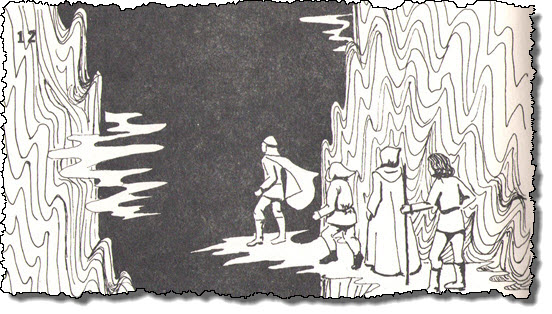 Art By Classic Old-School Artist “This Guy I Know”, At The Height Of His Fame

Chantille’s Misty Paths: Illustrated to the right, these paths are blend of illusory and real pathways crossing some gap or chasm, constantly branching, with some being solid (magical) walkways and others vanishing when sufficient weight is placed on them. The GM is encouraged to make the false paths more attractive by having them seemingly lead to phat l00tz.

Path of No Return: A fairly common concept in Ye Olde Schoole, as despite what I mentioned above, there’s still a “Screw you, players!” vibe. Social changes take time. This is simply a magical passage which vanishes behind the party, leaving impassable rubble, a wall, etc. A good way to deal with parties bound and determined to go anywhere but where they’re supposed to. Not really a “trap”, per se, so much as a phenomenon (doot-do-da-doot-do) to be dealt with.

Archer’s Angle of Agony: For when the PCs have failed this city. Turn a corner, step on a pressure plate, and arrows are fired from behind. Dwarves, hobbits, and other height-challenged characters are hit by fewer arrows.

Ebenezer’s Cage: A large cage drops over all or most of the party. Lifting it is impossible; digging under it reveals more bars, going down an indeterminate distance. Ah, but there’s a lever just outside the cage! Pulling said lever causes water to flood the passage, and the lever is now out of reach and stuck. The upper portion of the cage is an illusion, though, as Ebenezer was too cheap to repair it (yes, it says that), so the party may just float out. Escape is “almost certain”, and Funct is “Annoy”. (Yes, really.)

WHEEEEE!!!!: Go up the stairs. Search the door at the top for traps. Disarm the obvious trap on the door. Open the door. Trigger the stairs, which become a flat slide, taking you back to the bottom. If it were me, I’d also have a spiked pit at the bottom for the characters to slide into.

(A variant listed in the book has the trigger step being randomized each time the trap resets, and also includes the tale of a very stoned ogre.)

Can I Get There By Candlelight?: A stair trap where a subtle teleport causes the party to miss a floor of the dungeon. (Hidden/hard to find sections of dungeon (usually places where the best loot was hiding) were common practice back then).

Clay Pigeons: Remember what I said about a pit trap? I hope so, it was, like, only a few lines back. Anyway, this has something better: A magic mouth at the bottom that casts magic missile at the party as they tumble down the stairs.

Lowrie’s Logroller: It would take too long to describe this. Here it is: 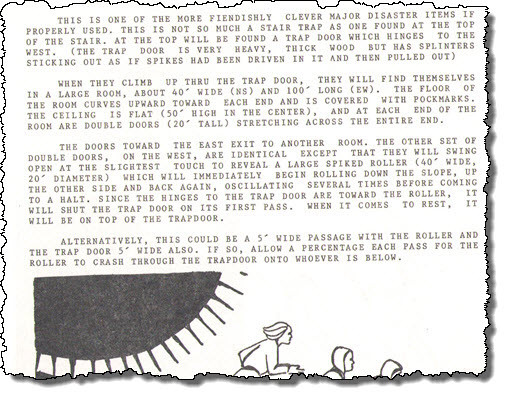 Depending On The Resources Available To The Party, This Can Be A Good Way To End A Campaign

The interesting thing about this is that it’s potentially lethal without being save-or-die. The GM can decide aforehand1 how many rolls it can make and the damage per roll. Provide a reasonable Reflex Save (for modern games) or save vs. dragon breath (if you’re kickin’ it Old School) for half damage. Given, say, 5 rounds of rolling, the PCs ought to be able to concoct a half-tolerable plan before they’re all dead (unless you up the damage to extreme levels). Or, keep the damage a little low, so they’re badly wounded… and then unleash the swarm of low-level monsters who were waiting for their foes to be weakened. (And it makes sense they’d be there, someone has to reset the trap, right?)

Doors! Possibly even The Who! Maybe the Grateful Dead! But certainly, doors.

1: Can you believe my spellcheck didn’t know this word?