Because, Really, Can You Ever Have Too Many Spells?

Sorry, Fighters/Thieves, You Are Basically Ignored in Old School

And, I Mean, Even Thieves Can Read Scrolls

Seriously, The Only Core 1e PHB Class That Could Never Cast Any Spells Was The Fighter 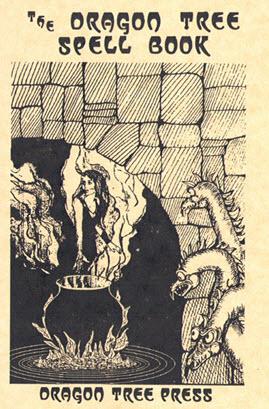 The Dragon Tree Spell Book by Dragon Tree Press (First Edition) was published in 1981. I have the second edition, which was published in 1991. As usual, I have no idea how different the First Edition was… it may be minor typos or there may have been major changes. Anyone who knows is free to tell me. Unlike the Delian Book of the Dead from Dragon Tree Press, this really is the Dragon Tree Spell Book. On the other hand, much like the Book of the Dead, my copy is square-bound and old with dry glue, so scanning pages is likely to damage or destroy a nearly 30-year old artifact. Sigh.

(There is a Dragon Tree Press web page, but it contains nothing more than a “Coming Soon” announcement, and is probably years old. Double sigh.)

Opening the book to begin reading it resulted in the too-familiar sound of dried binding glue cracking apart, so, scanning pages isn’t going to make things much worse. There’s that, I suppose. My center-stapled original Arduin books have survived much, but the square-bound, more “professional”, later volumes are falling to shreds. If I had ambition, I’d set aside a day or two and scan/OCR them to create a personal archive. But if I had ambition, I wouldn’t spend my time writing articles like this. So it goes.

I am intending to focus on the spells themselves, though. And, if you like this sort of thing, be sure to check out the Necromican!

The book notes that it introduced “0-level” spells in July 1981, prior to their introduction in “other works” as cantrips. As the first recorded reference I can find to such spells in “other works” was a 1982 issue of Dragon, they may have a point, but it’s hard to show this was anything but semi-simultaneous creation. (I can’t count the times I’ve had an idea for a game/book/supplement, only to see it announced or in print already soon after; when creators have similar mental states and are exposed to the same influences through the zeitgeist, similar outputs are to be expected. As the design space started to fill up in the early 80s, designers would look for untapped regions, and expanding the range of magic both up and down was an obvious choice.)

As typical for this type of article, I’ll just pick a few to comment on:

That’s enough for now. We’ll see if I can keep on track to get the next part by next week. (Shakes Magic 8 Ball) “Outlook Hazy”.