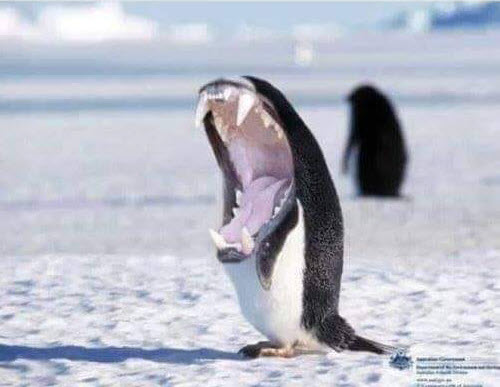 This Dark, Gritty, Reboot of “Bloom County” Isn’t Working For Me.

This image appeared on a Facebook group I follow, and I impulsively swore to stat it up. (Since it’s not a gaming group, it’s not like anyone would care if I followed up on my impulsive oath.) I was going to place it on my infinitely tall pile of “shit I’ll get around to eventually”, but then the name “painguin” came into my mind. Having already produced the “dolphiend” and “hellephant” for Mongoose, back in the early 2000s, this clearly fit my oeuvre. (PS: If your deadline requires you to think up, and stat out, 7-8 monsters a day, they ain’t gonna all be gems. But there’s nothing I’m actually ashamed of, and I’m really proud of the charcharodoom, and the fact I’m proud of it says an awful lot about me, I think.)

This Is Why I Don’t Use Any Mind-Altering Substances, Legal Or Otherwise. Stuff Like This Lives In My Brain When I’m Stone Cold Sober.

In any event, having come up the name, I pondered the system. Since Pathfinder 2 is what I’m mostly working on these days, that’s a given, and people seem to like when I also go old-school. But I’m also working, on-and-off, on a Pathfinder 2 version of my Earth Delta project. (I was making good progress on a PF1 version when Paizo announced PF2, so it kind of fell apart. Now that PF2 is out and stable, I’m back on it.)

So I’ll be dual-flavor-texting the PF2 version, for both Earth Delta (which may never progress, or it may) and classic Gygaxian fantasy, along with an AD&D version.

I may even do a Gamma World 1e, to complete the parallelism. I’d like to do Mutant Crawl Classics, as I have amassed quite a few books and supplements for it, but having never played it, and only played its counterpart DCC twice at conventions, I’m hesitant to start tossing numbers around. We’ll see.

There is some confusion over the origin of the painguin. As with so many creatures, the default explanation is “a wizard did it“. Others blame not wizards, but glacier-dwelling druids seeking to punish those who preyed upon endangered species, or perhaps ice-goblin alchemists experimenting with mutagens to create guards (or just for the hell of it, because, goblins). Still others believe they come from the same plane of the abyss as walrus demons, but this is dismissed as everyone knows walrus demons were from another edition.

Painguins are found in many locations in the ruined remnants of the old world, though primarily in temperate or cooler climes. It is probable they spread from a colony kept in a protected facility, such as a zoo or military bioengineering facility. They are particularly prevalent in the northern portion of the eastern Coast of Ruins, and around the Youkay Archipelago.

As with most species in the mutagen-rich, ever-changing chaos of the post-cataclysm world, they have countless variants. See below for a sample.

Melee [one-action] Ripping Bite +15 Damage 2d8+7 Slashing + 1d3 Bleed. On a critical success, instead of doing extra damage, the painguin may sink its fangs deep, so that the painguin ‘latches on’ to the target and will move with it. A 2-action Athletics check (DC 22) is required to remove it. As long as it is attached, it does 2d6 slashing  +1 bleed damage automatically at the start of its turn but can take no other actions unless it lets go (a free action). The gripped target is flat-footed to any other adjacent painguins. Any attack which scores a critical failure against the gripping painguin affects the target instead. This includes the target’s own attacks.

Bowl Over [two-actions] The painguin strides twice in a straight line and performs a trip attack against the first target in that line. If the attack misses, the painguin stops in front of the target; if it hits, the painguin may stop at any square within the straight line movement. Requirement: All terrain crossed must be primarily ice, snow, or smooth stone. It must start at least 10 feet from the target. Special: This movement does not trigger reactions by the target creature.

Devour The Fallen A painguin’s ripping bite does +2 slashing and +1 bleed damage against prone opponents.

One variant that regularly pops up within a herd is the electro-painguin. It gets the following additional actions:

Painguins are either the progeny of a wizard’s twisted alchemical experiments, or strange escapees from the abyssal plane ruled by Kostchtchie (or a similar icy realm). They dwell in any cold environment, where they intermingle with their less-dangerous kin. Some tundra and ice dwelling groups, human and humanoid, have managed to train them as guard animals, but it is more common to simply trick enemies into areas where painguins dwell and let nature take its course.

The painguin’s maw opens wider than seems possible, leading some to speculate it is magical, while others claim it is simply a complex, but natural, structure of unhinging bones and retracting fangs. Most who encounter painguins have more pressing concerns than anatomical exploration.

When a painguin hits with a bite, it may choose to either tear out a chunk of flesh, leaving a wound which bleeds for 1 hp/round until it is healed or bandaged (such wounds accumulate; 2 wounds = 2 hp/round, with two separate bandages needed, etc.), or it may grip hard, latching on. If it does so, it automatically does 1d3 damage per round until it is slain or removed (using bend bars/lift gates, but treat the character attempting to tear it off as having +2 strength). Anyone trying to attack an “attached” painguin may choose, before rolling, to attempt to hit either AC 5 or AC 2; if they choose the former, any miss result strikes the victim for half normal damage. Yes, this includes attacks made by the grabbed character themselves.

Pack Attack: If two or more painguins attack the same target, each has +1 to hit and does +1 damage.

If a painguin has at least 3″ of clear space between itself and a target, and the ground is mostly snow or ice, it may forego its normal attack to charge the target and attempt to knock it down. It must hit AC 12 (plus any Dexterity adjustment to AC), and then, the target must make a save vs. breath weapon or fall prone. Other painguins do +2 damage against a prone target, in addition to their pack attack bonus if there’s more than one.

Painguins take half damage from cold.

They love shiny things, especially gems, and collect them to give to prospective mates. If someone is wearing a lot of jewelry, they may attack them in preference to other targets.

I got Gamma World 1e when it was the only “e”, and wrote programs in BASIC on an Atari 400 w/membrane keyboard and cassette tape to randomly roll up mutants, writing down the output by hand in a notebook. Because that was bleeding edge tech for a 16 year old in 1982. I dug up my 1e rulebook for this article, and, man, things were a lot simpler then, stat block wise. I’ve tried to mimic this minimalism, as well as the naming convention.

Pane gwins are mutant penguins with immense jaws, that can do 3d6 damage per bite. If the damage dice come up triples, the pane gwin has attached itself to the target and will automatically do 2d6 damage on its turn, without an attack roll. Other pane gwins attack a bitten target as if they had 8 hit dice.

10% of pane gwins also have the electrical generation mutation.