For those coming in late, one of my first attempts to drive myself to update regularly was a desire to categorize every level of the Abyss, using the fourth edition of Dungeons & Dragons. That worked as well as expected. It’s been more than a year, but, here’s another one.

Alzarath, as the plane is formally known to scholars and sages, is a freezing sea with a roughly circular shape, perhaps a thousand miles across. It is bounded not by the elemental chaos (usually) or some impassable barrier, but by other layers of the abyss, which shift and fade over time. All of the layers which occasionally border it have some traits in common with it, such as cold, acid, or simply being oceanic, and the boundaries are usually fuzzy, as befits a realm of such malign chaos. At times, this can be a boon, providing rapid transit to different planes that might otherwise be disconnected, but most often, it is lethal,  as travelers in, say, the Howling Reef may not be at all prepared to deal with the extremes of cold and corrosion found here, and may find themselves subjected to these conditions without warning. Very rarely, portions of the elemental chaos may also overlay the edges of this plane, creating the risk of trapping explorers of that realm in the Abyss, as such overlays endure for a few hours at most.

The sea itself is a strange bluish-purple, swirling with odd colors and shades. It is nearly opaque; anything more than a square away is obscured and anything more than four squares away is heavily obscured. Perhaps surprisingly, it is not particularly storm-tossed or rugged, but rolls slowly under a dim and distant sun, a rust-colored orb that drifts slowly and irregularly across the sky. During night, which will last for 20+2d12 hours (day lasts only 1d12 hours), the sky is mostly dark, but there are flares of actinic light at random intervals that illuminate the plane for a brief instant.

The liquid of the sea is, of course, acidic. Each round of contact will do 10 points of acid damage, and any items worn, unless resistant to acid, must make a save each round after 5 rounds of continual contact; the first failed save will render the item useless until it can be repaired following a short rest, the second failed save will destroy the item.

The cold must also be mentioned. If the best mundane protections are available (heavy furs and insulated cloaks costing at least as much as a 10th level magic item, per person), it can be resisted, but anyone not protected by such things, or by magic, will take 5 points of cold damage per round.

Any nature checks for survival in this plane are 25th level in difficulty. Some of the challenges include leeching acid from the demonic “fish” that dwell in the sea, sleeping in the intense cold, maintaining a craft as it is being dissolved, navigating through the icebergs, and so on.

The most prominent feature of the plane, though, are the icebergs. They range in size from a few dozen feet to true mountains a mile or more in height — and, thus, many times that size below.  Almost all contain within them trapped souls, fully conscious of course, simultaneously freezing and being dissolved, eternally. By dint of extraordinary effort and determination, some of those entrapped can claw their way out, taking thousands of years to do so in most cases. Those who manage this are usually quite mad from their torments but are immured to their environment; occasionally, demons from other realms will spot them and recruit them, transforming them into servitors, as beings of such will and malice deserve a chance to inflict their evil on the world.

The substance of the ice is impossibly hard and jagged; a craft which runs aground on one will take 3d10 damage to its hull, plus an additional D10 for each square of movement it had when it hit. Because the icebergs conceal their vast bulk beneath the opaque surface, avoiding such collisions is difficult. (Skill Challenges to navigate the sea might presume that each failure represents a collision, rolling damage as needed; the DM should let players choose their speed of travel. Slow speed reduces the damage from failure, but also increases the time spent traveling, with all that entails; high speed can get you out quickly, but a bad roll could strand you.)

The primary inhabitants of the layer are the Woolikkiril, more colloquially known as Tusk Demons or Walrus Demons. These creatures somewhat resemble great, bloated, walruses, with their forward flippers ending in writhing tentacles, and their skin scarred and oozing foul pus. They will have 1d4+1 tusks each, with each tusk of a different length and orientation. They are some fifteen to twenty feet in length, and “speak” in a bellowing, simplified, form of Abyssal. They have little purpose other than to battle each other for momentary dominance and to hunt anything that might travel in the plane besides themselves. Gnoll shamans who live in the coldest parts of the material realm sometimes summon them, to cast them against their enemies.

Nuzabarath is one of the few non-demons to exist, and even thrive, here. She is a rare creature indeed, the spawn of a black dragon and a white dragon, and the mottled patterning of her skin is the source of her nickname — the Chessboard Dragon. She dwells in one of the largest icebergs, a great mountain of frozen acid that juts over a mile into the sky and has an underwater bulk that stretches down two miles and is at least five miles at its widest point, filled with a maze of caverns and passages. There are many teleportation circles and portals to the material realm scattered through her lair, and she has spent centuries gathering treasures from mortal worlds, all things particularly resistant to the corrosive forces of her home, such as jewels, ceramics, glassware, and enchanted or transformed substances. Her nickname, some claim, ought to be due more to her lifestyle than her looks; she is an active power on a half-dozen worlds, usually in a humanoid guise. (Her ego mandates that there will be some patterning of black and white to her, in any form she takes; two of her favored seemings are that of a pale skinned eladrin woman with intricately styled dark braids, and a human woman with oddly mixed ink-black and chalk-white hair and a penchant for spotted furs. She has never been known to take on a male form. Of course, given her predilection for plotting and confusion, she may well have convinced her allies and enemies that she limits herself thus.) 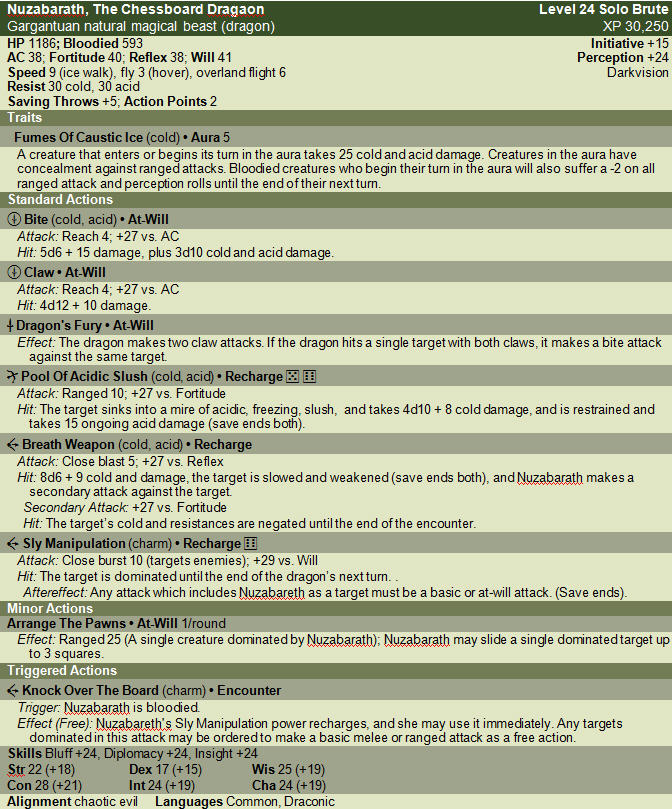 Nuzabarath is a fine “boss monster” for a long story arc, as preparing to survive in her abyssal lair should take some time, as will finding the lair itself on the great acidic sea. For that matter, she can make a patron for evil adventurers — or good ones who have been ensnared in one of her many manipulations. Walrus demons who have been loosed by an interdimensional rift and are now reeking havoc on the mortal world are another good source of adventurer bait, and, lastly, characters exploring a frozen portion of the elemental chaos may find themselves even lost in the Caustic Glaciers if the planes align just right… or wrong.

There are no large or well-established settlements on this plane, but there may be one or two tiny communities hidden in the deep cracks of the larger glaciers, either acid and cold resistant beings from other abyssal lands, or even mortal creatures who have somehow learned to survive here or who are protected by powerful magic.