Because Anything Is Inspirational If You’re Trying To Avoid Work

For AD&D and Pathfinder 2e

So, after staring at Scrivener somewhat, I reluctantly realized I wasn’t getting past a story block. Also, I avidly add alliteration. This led to me clicking random links, which led to me downloading an out-of-copyright horror comic from the 1950s. The lead story featured a death row inmate escaping from prison into a spoooooky swamp, where he encountered horrible creatures…. 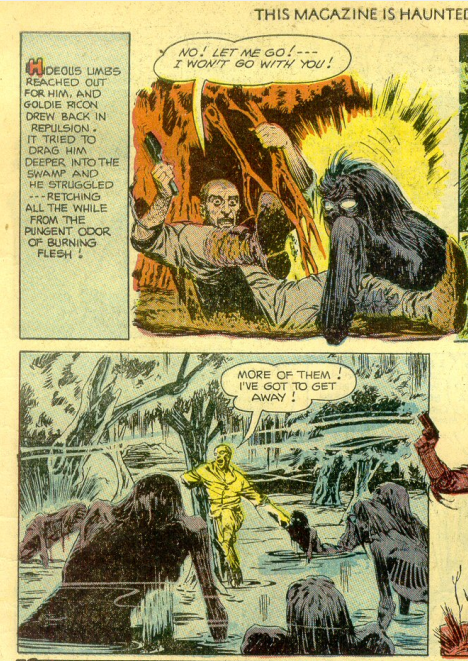 The swamp monsters symbolize conformity to the arbitrary laws of society. The “criminal” is merely someone who defies such social conventions. This is deep, man.

Our “hero”, Goldie Ricon, flees from the swamp, where he joins up with his gang, who pronounce him a genius for his cunning plan to fly to South America. I guess, in the 1950s, the bar for “criminal genius” was pretty low. Anyway, he keeps seeing the creatures lurking around, and the smell of charred meat. Eventually, to get away from them,  he surrenders to the cops, is returned to prison, and is electrocuted. Ah, but he does not escape. As it turns out, the monsters are the animated corpses of those who died from electrocution…. so Goldie ends up becoming one of them in the end. The End. 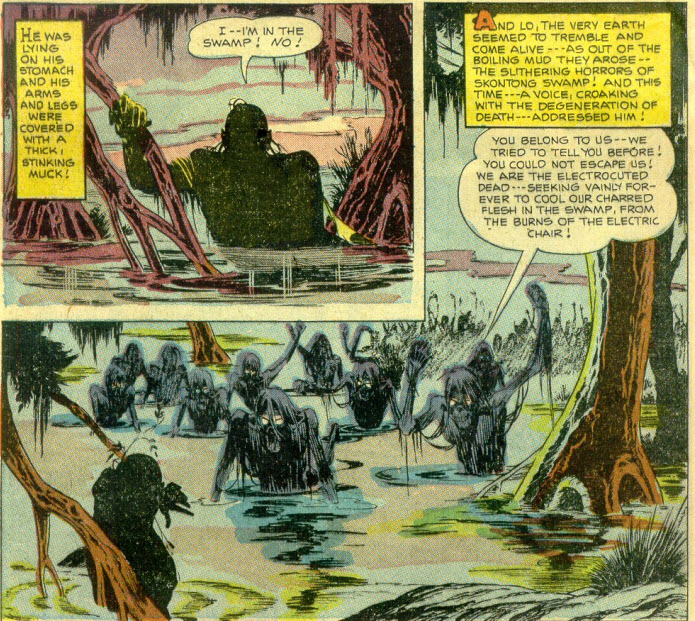 A profound statement on the true cost of capital punishment. Daring and bold for its era, don’t you think?

And so, bereft of inspiration for continuing the three other things I am working on, I decided that undead created when they were struck by lightning was a cool idea. I often find that if I’m stuck on one project, switching gears can help, especially if the prospect of finishing my new task fills me with new resolve to go back to the old one. I will write a book on How To Make Procrastination Work For You, if I ever get around to it. You see what I did there?

So, without further ado (or adon’t), I give you Stormslain!

Stormslain are created in two ways: The first occurs when an evil person lawfully condemned to death is killed (usually accidentally) by lightning — typically, this happens when you try to hang someone from a high gibbet during a storm, though there was one famed incident in which the executioner’s axe was struck just as the downswing was about to finish — and the body is tossed into an area rife with necromantic or evil energies, such as a swamp used to hold the bodies of dead criminals.

The second occurs when an evil person is killed while under the stormslain’s lightning curse, see below.

Stormslain are horrific creatures to look upon. They are gruesomely charred corpses, often with wisps of acrid smoke curling off their blackened flesh, years or decades after their death. Their eyes are liquefied, molten globs inside their sockets, and their flaking, ashen skin cracks as they move, revealing raw, red flesh beneath. They exist in perpetual agony, trapped in the last instant before their death, and the only redress for this, they believe, is to condemn other beings as evil as themselves to the same fate. This will, they hope, eventually free them. Whether this has ever occurred is a matter for the sages to debate, but, because of this belief, they will focus on evil enemies first. Stormslain will not stupidly ignore non-evil foes actively attacking them or otherwise act mindlessly; their pursuit of evil is a conscious choice rather than a supernatural compulsion and they act accordingly. Furthermore, they will not hesitate to attack good or neutral parties if no evil individuals are present.

Typically, one in a group will attempt to grab a target, then the others will bite, taking advantage of the target’s flat-footed condition. They will also use Intimidation to undermine their foes, ignoring the auditory and language requirements of the Demoralize action.

At the GM’s discretion, they may pursue an evil creature who has escaped them as if they had Master rank in Survival and the Expert Tracker feat.

Evilsense The stormslain can automatically identify similarly evil beings who approach within 30′. Any unnoticed evil creature in the area instantly becomes undetected, and the stormslain can seek such beings as a reaction triggered by them coming within range. Treat this as scent (30′) otherwise, except they’re “smelling” the taint of evil.

Lightning Curse: If a stormslain critically succeeds on a burning bite, the target is afflicted with the lightning curse. If the target is evil, this affliction is virulent. Saving Throw DC 24 Will; Stage 1 Vulnerability Electricity 5 (1 day); Stage 2 As Stage 1 + roll twice on any saves vs. electricity and use the lower; this is a misfortune effect (1 day); Stage 3 As Stage 2, plus any significant electrical effect they are in range of will target them in addition to any designated targets. During thunderstorms, there is a 10% chance/minute to be hit by a bolt for 6d6 electrical damage (basic reflex save, DC 24). (1 day)  Special: Any evil creature killed by electrical damage while under the curse becomes a stormslain. Removing The Curse: Either a remove curse spell, or, use the rules for treating disease, but apply the Religion skill instead of Medicine.

Stormslain are originally formed when a criminal condemned to execution is slain by electricity rather than by the ordained means of death; the most common case is when lightning strikes a gallows before the condemned has perished. Further, some exposure to lingering evil or negative energies is required to provide the, ahem, spark of un-life. Since such energies accumulate in the charnel yards where the corpses of the criminal class are cast, this is not as uncommon as it might seem. They can thus be found in abandoned graveyards, swamps used to dump bodies, the crypts beneath an ancient prison, and so on. A few have wandered far from their point of origin, and so might turn up almost anywhere.

In appearance, they are badly-charred humanoid figures, reeking of burned, rotting meat. When moving and fighting, their outer skin sometimes cracks, revealing red, bloody flesh beneath.

They exist in torment, trapped at the moment of their death. They believe — correctly or incorrectly, no sage has divined — that they can be freed to move on to their destination if they punish other evil-doers. They can detect evil in a 60′ radius at-will, and do so constantly. They will attack evil targets in preference to others, but not to the point of ignoring a more immediate threat. They will not hesitate to attack innocents if no evil beings are about.

The shocking bite of a stormslain does lightning damage, and the victim must save vs. spell or suffer the lightning curse, as follows:

Characters of evil alignment are at -2 to save against this curse.

A remove curse spell will cure the victim as usual.

If both claw attacks hit the same target, that target is grabbed and can be dragged off or held in place by the stormslain, making it easy prey for the others. The stormslain cannot use its claw attacks while holding someone. Stormslain typically have a strength of 12; for more variety, roll 10 + 1d4 for any given individual. If the grabbed target is stronger, they have a 20% chance per point of greater strength to escape each round. Anyone with Strength of 18/01 or higher escapes automatically.

Stormslain are immune to sleep, charm, hold, and similar spells, as well as to poison and lightning. Silver weapons at +1 to-hit and damage against them.

If they encounter an evil creature who escapes unharmed, they may (20% chance) follow them as if they were a ranger.